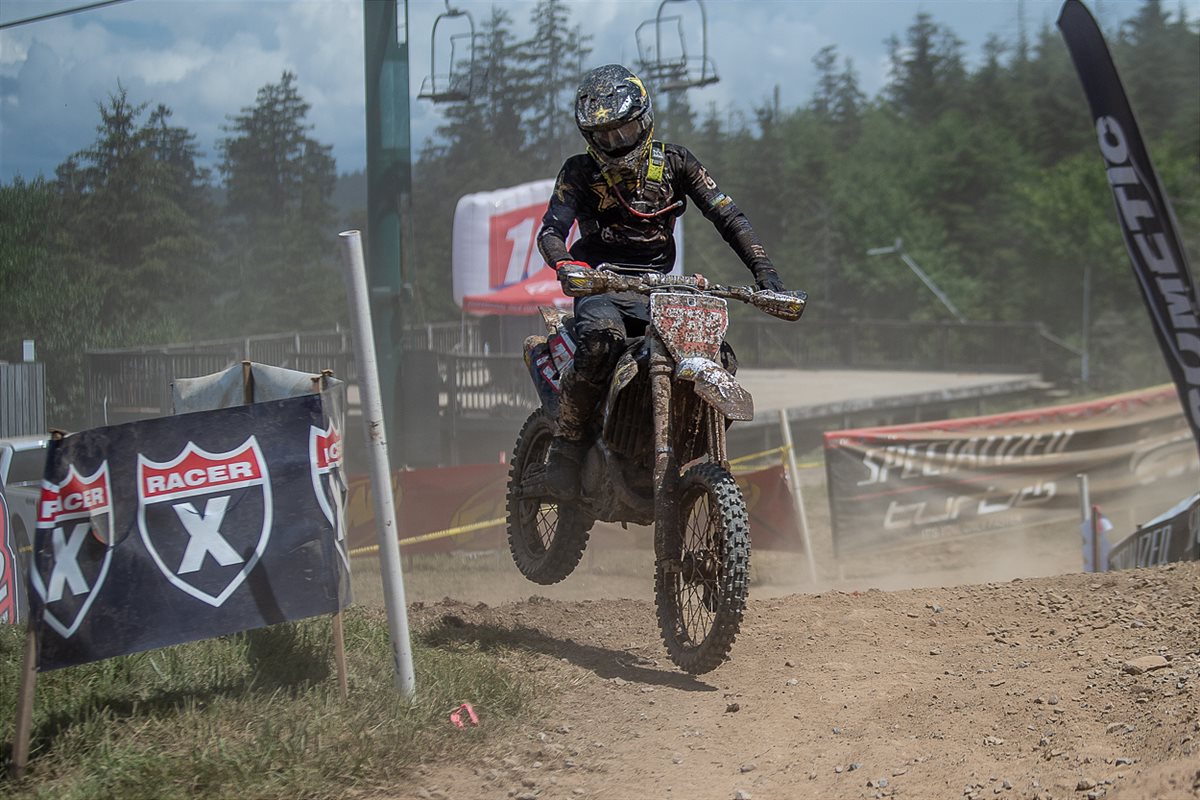 The Rockstar Energy Husqvarna Factory Racing Team made its way to Snowshoe Mountain Resort in West Virginia on Sunday for the ninth round of the 2021 Grand National Cross Country (GNCC) Series. In true fashion, the Snowshoe GNCC delivered treacherous conditions up and down the mountain but West Virginia native Thad DuVall charged hard all race long to come away with sixth overall at the challenging three-hour battle.
Following a string of bad luck that has caused him to miss a majority of races this season, DuVall lined up on the fourth row for Sunday’s live engine start and he had his work cut out from the start as he set his sights on chasing down the front-runners. With a steady pace through the first two hours, DuVall climbed his way up to sixth with two laps to go and he held strong in the final hour to finish a respectable sixth overall in only his third full race of the 2021 season.
“I started on the fourth row so it was tough, those guys kind of got away at the beginning of the race so I just had to ride my own race,” DuVall said. “My FX 350 worked awesome all day. The track was brutal, gnarly and super rocky – definitely one of the tougher years we’ve had. I just kind of started picking off guys every lap and just tried to stay off the ground, stay smooth and not get stuck. I felt like I rode good all day but those guys kind of got away at the beginning and I was kind of like in no-man’s land but other than that it was an awesome day and I’m excited to get through summer break and get back to racing.”
In only his sixth race back from a knee injury, Trevor Bollinger started the day off on a positive note as he battled in the top-10 early in the race. Unfortunately, he tweaked his knee halfway through and after riding with limited ability, he made the tough decision to call it a day.
“I got a good start and I was leading my group there for a while but I tweaked my knee a little bit,” Bollinger said.“From there, I couldn’t really put my foot down so I just decided that it would probably be safer and smarter to just pull it in and call it a day. Hopefully we can heal up over summer break and come back swinging.”
In the XC2 250 Pro class, defending class champion Craig DeLong got off to a great start as he assumed the lead early in the race. Clocking in the lead position for the first hour, DeLong continued to battle up front well into the halfway point but an unfortunate crash sent him to the ground pretty hard and he soon found himself in survival mode for the remainder of the race. Digging deep, DeLong did everything he could to finish strong despite the tough conditions and he salvaged sixth-place for the day, where he maintains a solid second in the class championship as the series heads into a two-month summer break.
“I was running good in the beginning,” DeLong said. “I was leading and battling back-and-forth with Johnny but I had a good get-off after the pit stop. I was running them down and I was in second and just had a crash that I didn’t even see coming and it honestly kind of scared me. I got up and I just couldn’t find my groove again. We’ll come back in a couple months and try again.”
Next Round: Beckley, West Virginia – September 12, 2021
Results: Snowshoe GNCC
XC1 Open Pro Class
1. Ben Kelley (KTM)
2. Steward Baylor Jr. (YAM)
3. Jordan Ashburn (HQV)
…
6. Thad DuVall – Rockstar Energy Husqvarna Factory Racing Team
11. Trevor Bollinger – Rockstar Energy Husqvarna Factory Racing Team
XC2 250 Pro Class
1. Jonathan Girroir (GAS)
2. Benjamin Belko (HQV)
3. Ryder Lafferty (HQV)
4. Evan Smith (HQV)
…
6. Craig DeLong – Rockstar Energy Husqvarna Factory Racing Team
2021 Championship Standings – After Round 9 of 13
XC2 250 Pro Class Championship Standings
1. Jonathan Girroir – 232 points
2. Craig DeLong – Rockstar Energy Factory Racing Team – 198 points
3. Cody Barnes – 146 points
About Michael Le Pard 7926 Articles
"Mr. Totalmotorcycle". Owner and Founder of Total Motorcycle. Supporting over Motorcyclists and Motorcycling for 23 great years. Total Motorcycle is my pride and joy and being able to reach out 375 million people has been incredible but I could not have done it without the support of my visitors, readers and members, thank you so much! You are making a difference to millions of riders worldwide. Thank you.
Website Facebook Instagram Twitter YouTube LinkedIn

Andrea Dovizioso finished the Thailand GP, held today at the Buriram International Circuit, in fourth position. The rider from Forlì, who started from row 3, ran at a consistent pace throughout the race and after […]

Leon Camier narrowly missed out on a debut podium with the Red Bull Honda World Superbike Team, the Briton claiming a hard-fought fourth place in Race 1 of the Thai WorldSBK round after a stellar qualifying […]