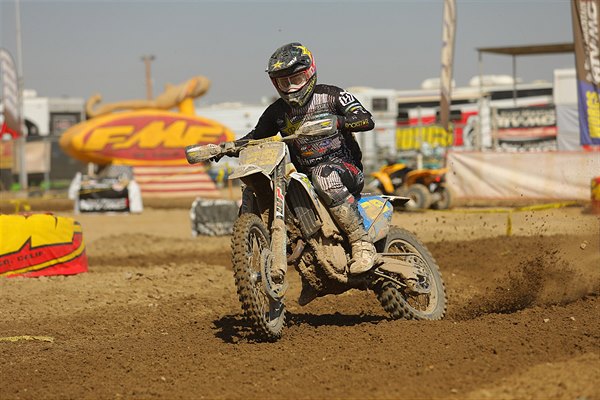 Following an incredible career-first win at the Rally Du Maroc, Rockstar Energy Husqvarna Factory Racing Team’s Andrew Short looked to keep the momentum rolling at Round 10 of the World Off-Road Championship Series (WORCS) in Taft, California over the weekend. Short found the dusty conditions to be very challenging but as one of the most versatile racers on the planet, he was able to battle his way through the two-hour race to claim a top-10 finish at the penultimate round.
Short got off to a mid-pack start and settled in just outside the top-five on the opening lap. Just as he was starting to gain momentum, Short went down in the ‘Pro Section’ and became engulfed in the heavy dust. With limited visibility, he attempted to power his way up a big hill climb but it proved to be a difficult task in the dust. After three attempts, Short was finally able to make it up the hill. From there, he experienced a few more crashes that would drop him back as far as 10th but he was able to put on a charge during the final lap to ultimately secure ninth in the Pro (MC) division.
Andrew Short: “It was a really frustrating day for me, definitely not my best race. I was feeling pretty decent for the first few laps but I went down in the Pro Section and it was full of dust, which ended up being a disaster. I had four crashes total and most of them were just from limited visibility. But that’s racing – other people were able to do it better than me in that aspect today so it’s something to learn from and try to get better.”

Krummenacher and Caricasulo Ready to Resume Rivalry in Argentina

With only two races remaining and just 10 points separating Randy Krummenacher and Federico Caricasulo at the top of the championship standings, this weekend’s penultimate race at Circuito San Juan Villicum in Argentina could prove […]