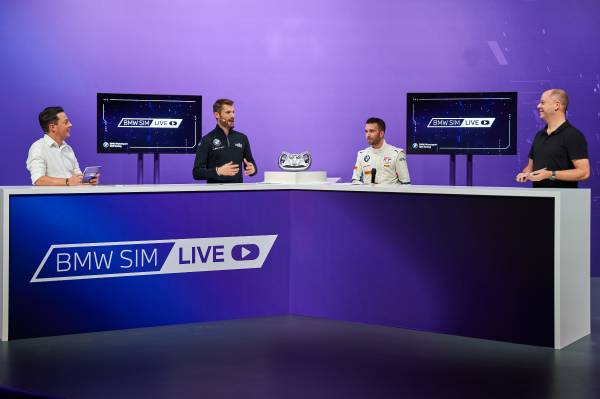 Munich. Spectacular racing, big prize money, award presentations, sensational world firsts: BMW SIM Live, which this year was streamed as an online event due to the pandemic, represented the grand finale of the 2020 BMW Motorsport SIM Racing season and served up a show full of highlights. In the grand finals of the BMW SIM 120 Cup and the BMW SIM M2 CS Racing Cup, victories went to professional sim racers Joshua Rogers (AUS) and Erhan Jajovski (MKD). A total prize purse of over € 25,000 was up for grabs in the two races. The event also offered the opportunity to look back on the extremely successful first season of the BMW Motorsport SIM Racing commitment, as well as looking ahead to the programme for the coming season, which is even bigger and better.

“In terms of digital activations, sim racing and Esports went through the roof last year – the figures were really unbelievable,” said Stefan Ponikva, Vice President Brand Experience BMW, in his opening speech. “This rapid development shows that we were absolutely right when we took the decision in 2019 to significantly expand our sim racing commitment. In the future, we will continue to work to achieve the perfect symbiosis between real and virtual racing. I can assure all the fans that sim racing is a fundamental part of our motorsport and Esports strategy – and it will remain so.”

Rudolf Dittrich, Head of BMW Motorsport SIM Racing, said: “BMW SIM Live was the icing on the cake at the end of the first season of our expanded BMW Motorsport SIM Racing commitment. Thank you to everyone involved for the spectacular live show, and congratulations to the two winners of the grand finals in our BMW SIM Cups, Joshua Rogers and Erhan Jajovski. Today’s races were top class, as they have been all season. We saw the best sim racers in the world go head to head in virtual BMW race cars and are already looking forward to giving them even more opportunities to compete at the highest level next year.”

From a sporting perspective, the spotlight was on the grand finals of the two BMW SIM Cups at BMW SIM Live. Over the course of the season, a total of 22 of the world’s top sim racers had qualified for the two finals via six races in the BMW SIM 120 Cup, in the virtual BMW M8 GTE, and ten races in the BMW SIM M2 CS Racing Cup. The finals were held as part of BMW SIM Live. The grand final of the BMW SIM 120 Cup took place on the iRacing simulation platform at ‘Silverstone Circuit’, as voted for on Twitter by the community in advance of the event on the iRacing simulation platform. Joshua Rogers took the victory and was rewarded with a cheque for 12,000 US dollars and a trophy featuring multimedia elements, elaborately designed by BMW Designworks. Second and third place went to Maximilian Bendcke (GER) and Graham Carroll (GBR), who received 6,000 and 3,000 US dollars in prize money for their efforts. “What an Event! Massive thanks to BMW who managed to put this event on in spite of the pandemic,” said Rogers. “First, qualifying went well. I managed to get the lap in when it counted. Start of the race wasn’t so good as I was falling back quickly. Then, I tried to pick up places where I could. Did an aggressive move on Maximilian which did not pay off. I got a penalty for it, which is fairplay. After that I tried to pick my line and analyze what was going on. And in the second to last corner the heavens opened up and the rest is history.”

The grand final of the BMW SIM M2 CS Racing Cup took place at the virtual Nürburgring on the rFactor2 simulation platform. Erhan Jajovski was victorious in the BMW M2 CS Racing, ahead of Nikodem Wisniewski (POL) and Risto Kappet (EST). They received € 2,000, € 1,000 and € 500 for their podiums. “In qualifying, luckily I nailed the last lap, which put me on pole position,” said Javovski. “I am speechless now, I am so happy and relieved that I got the pole position and that the start of the race went smoothly. After that I just kept on driving until the end. I expected to be more under pressure, but it went my way this time.”

Awards, world firsts and looking ahead to the 2021 season.

Within the BMW SIM Live show, which was presented by well-known sim racing presenter Ben Constanduros and BMW works driver Martin Tomczyk (GER) as co-presenter, BMW Motorsport SIM Racing presented the “Move of the Year” and “Influencer of the Year” awards to Carlos Ramos (PUR) and sim racing YouTuber Jimmy Broadbent (GBR). Ramos caused great excitement among the community with his spectacular drift pit stop, while Broadbent thrills thousands of fans every day with his extensive coverage of sim racing.

BMW SIM Live also provided a stage for some sensational world firsts. BMW works driver Philipp Eng (AUT) presented the steering wheel for the new BMW GT race car, the BMW M4 GT3, which was developed together with sim racing hardware manufacturer Fanatec. It is the first steering wheel in the world that can be used in both a real race car and a race simulator without any modifications. Other world firsts included the introduction of the virtual BMW M4 GT3 on the iRacing platform, before the real race car has even contested its first race, and the presentation of the “Fusion SL Concept” hybrid furniture, which can be transformed from modern lounge furniture to a fully-functioning sim rig in just a few simple steps.

About Michael Le Pard 5164 Articles
"Mr. Totalmotorcycle". Owner and Founder of Total Motorcycle. Supporting over Motorcyclists and Motorcycling for 21 great years. Total Motorcycle is my pride and joy and being able to reach out 330 million people has been incredible but I could not have done it without the support of my visitors, readers and members, thank you so much! You are making a difference to millions of riders worldwide. Thank you.
Website Facebook Instagram Twitter YouTube LinkedIn

The Monster Energy Yamaha MotoGP Team had been looking forward to this day for months. They got to show off their 2019 team colours in action on the first of three testing days at the […]