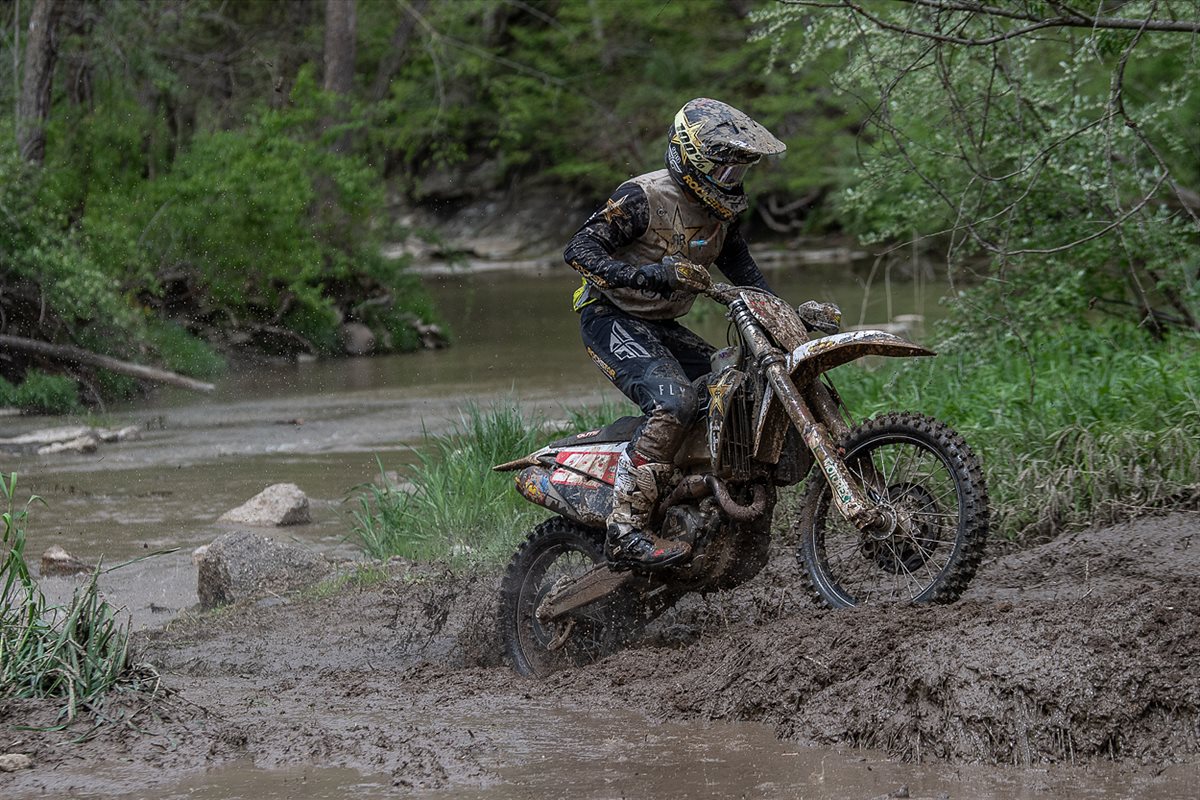 On Sunday, Rockstar Energy Husqvarna Factory Racing’s Thad DuVall made big strides in his recovery from an early season injury as he delivered a strong fourth-place performance at Round 6 of the 2021 Grand National Cross Country (GNCC) Series in Crawfordsville, Indiana.
Although he lined up at the previous round for his first race back, DuVall didn’t get the full three-hour GNCC experience due to a freak issue that took him out of race contention. With another fresh start at Sunday’s Hoosier GNCC, DuVall got off to a great start in the XC1 Open Pro class, where he charged his way into second entering the woods on the opening lap. He got shuffled back a few positions in the early part of the race but he found his groove about halfway through and put on a last-half charge to climb his way back inside the top-five. He continued to gain momentum in the final hour and he eventually overtook the fourth-place position as the two-lap card fell. Putting in his first full three-hour race since the opening round in February, DuVall finished the day off strong in fourth.
“I tried to ride my own race at the beginning but I made a lot of mistakes and got super tight,” DuVall said. “I felt really good towards the end, so I just kept hammering. To come out and get fourth at the first race back, I’ll take it. It’s a good building block so we’ll keep building up the pyramid and hopefully we’ll get some wins.”
Trevor Bollinger, who is also battling his way back from injury, had a positive day of racing in Indiana. He captured a top-10 start in the XC1 Open Pro class and slowly climbed his way up to sixth after the first hour and a half of racing. He remained in the fight for sixth heading into the last hour but he ultimately dropped back to seventh, where he would ultimately finish for the day.
“This was my fourth race back and we definitely had a better day today,” Bollinger said. “I felt more competitive, even though the results don’t quite show it, and I feel like I had a little more fire in me. I’m looking forward to the next few races, giving me more time to get healthy and get back up front where we belong.”
XC2 250 PRO
It was a challenging day for defending XC2 250 Pro Champion Craig DeLong, who came into the weekend a bit under the weather. DeLong got off to a dead last start but he worked his way through the pack early on to put himself into third by lap three, where he sat only six seconds behind the lead battle. Holding onto a great pace through the first half of racing, DeLong started to hit a wall later in the race as the effects of his illness began to set in. He eventually dropped back to fifth heading into the final hour and he was on par to salvage a top-five finish but he got passed on the final lap, ultimately finishing sixth for the day.
“I had a decent race but I’ve been pretty sick the past two weeks so I definitely struggled,” DeLong said. “I came to contend for a podium if I could and I did my best. I ran up front for the first half of the race but I was just physically exhausted and just struggled to have the strength to do it. On to the next one.”
Next Round: Millfield, Ohio – May 23, 2021
Results: Hoosier GNCC
XC1 Open Pro Class
1. Steward Baylor Jr. (YAM)
2. Ben Kelley (KTM)
3. Layne Michael (YAM)
4. Thad DuVall – Rockstar Energy Husqvarna Factory Racing Team
5. Jordan Ashburn (HQV)
…
7. Trevor Bollinger – Rockstar Energy Husqvarna Factory Racing Team
XC2 250 Pro Class
1. Jonathan Girroir (GAS)
2. Mike Witkowski (YAM)
3. Cody Barnes (HON)
…
6. Craig DeLong – Rockstar Energy Husqvarna Factory Racing Team
2021 Championship Standings – After Round 6 of 13
XC2 250 Pro Class Championship Standings
1. Jonathan Girroir – 135 points
2. Craig DeLong – Rockstar Energy Factory Racing Team – 117 points

About Michael Le Pard 5579 Articles
"Mr. Totalmotorcycle". Owner and Founder of Total Motorcycle. Supporting over Motorcyclists and Motorcycling for 21 great years. Total Motorcycle is my pride and joy and being able to reach out 330 million people has been incredible but I could not have done it without the support of my visitors, readers and members, thank you so much! You are making a difference to millions of riders worldwide. Thank you.
Website Facebook Instagram Twitter YouTube LinkedIn

The 10th and final stage of the Silk Way Rally proved to be one of the toughest of the event. Winding its way along fast rocky tracks and through the ravines and dry river beds […]

Colt Nichols got the new year off to a sensational start tonight, taking his first career Monster Energy AMA Supercross 250SX win at the season opener at Angels Stadium of Anaheim. It was great night […]