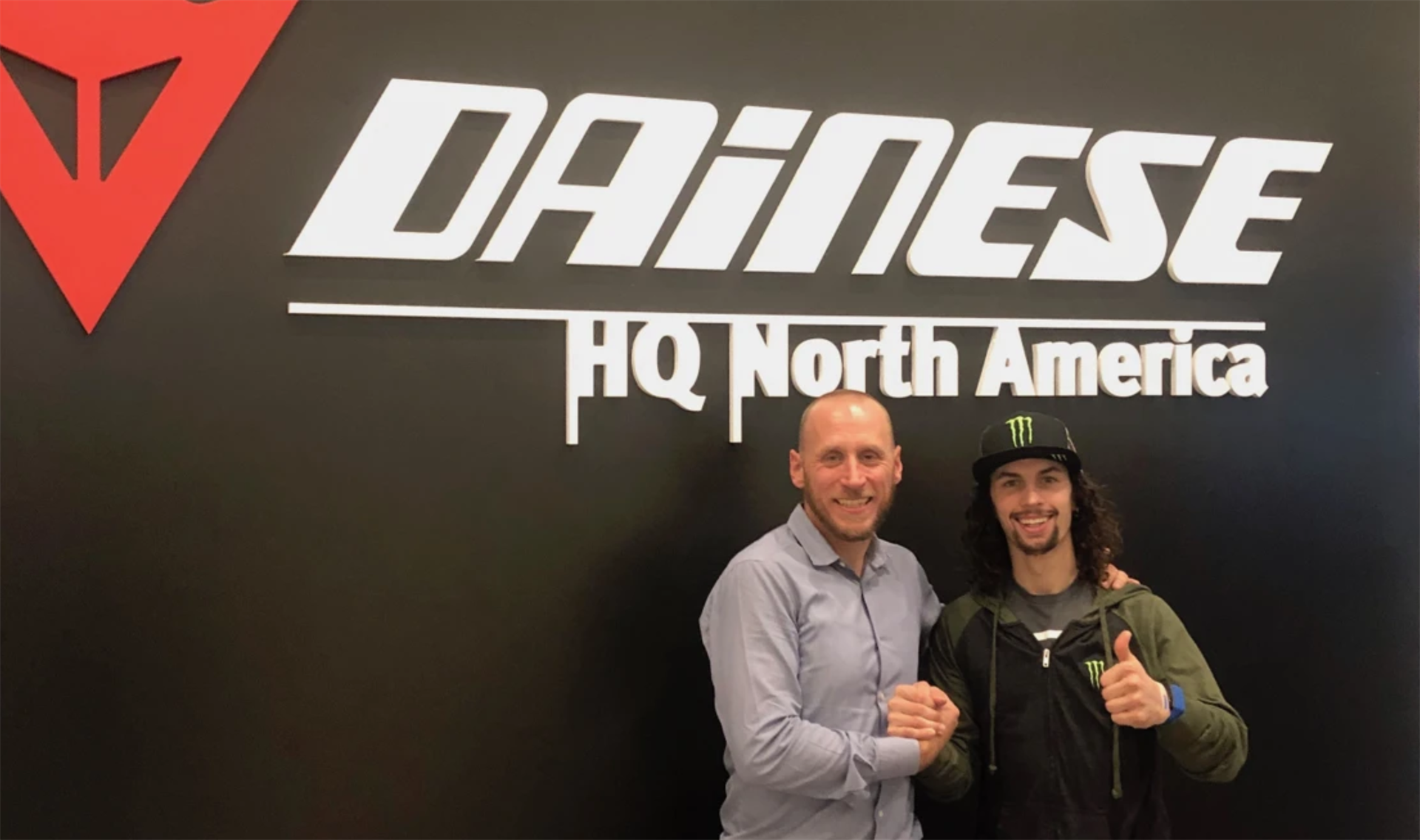 Estenson Racing is entering its third year as a privateer team. The 2019 season will be Estenson’s largest, and arguably strongest, roster of racers. The team is made up by twins class racers JD Beach, Jake Johnson, and Kolby Carlile, and singles class racers Ryan Wells and Dallas Daniels. Estenson’s Twins Racers will be equipped with Dainese D-air® suits and top-of-the-line boots and gloves for the 2019 American Flat Track racing series. Dainese is also the Official Safety Partner of American Flat Track.

“After extending our partnership with the American Flat Track series, we focused on finding top riders who will help us further develop our D-air technology for the Flat Track world,” said Roberto Sadowsky, Executive Vice President of Dainese, North America. “Having riders like Beach in our premium protection is essential in gathering feedback to enhance our technologies. We will continue to evolve the D-air system for Flat track with the some of the best professionals in the sport.”

JD Beach is considered one of the most versatile racers in North America. Although road racing has been a focal point for much of Beach’s professional career – with two MotoAmerica Supersport titles – his skills in flat track racing are equally impressive. A rarity, Beach is at home sliding on the dirt of American Flat Track aboard his Yamaha MT-07 and going bar-to-bar in MotoAmerica on his Yamaha YZF-R1. The 2019 MotoAmerica championships will see Beach racing in the D-air® airbag system, the highest form of protective technology in the sport of motorcycle racing. Beach’s protection will be completed with Dainese R Axial Pro IN boots (Dainese’s patented “in” boot system) and the Dainese Full Metal 6 gloves.

With the partnership between Estenson Racing and Attack Performance, 2019 marks the first year that Beach will be going for the championship in the premier classes of both MotoAmerica and American Flat Track.

“I’m really excited to be working with Dainese this year,” Beach said. “I think it’s awesome that they have come on board as a team sponsor. They are a great brand, known for their quality protection. I think it’s so cool that they are as passionate about road racing and flat track as I am. It’ll be fun taking on this new adventure with them as they continue to develop technology for the sport of flat track racing.”

“At Estenson Racing, safety is the number one priority for our athletes,” said Tim Estenson, Owner and CEO of Estenson Racing. “Dainese has proven to be the leader in the industry when it comes to safety, and I am thrilled to partner with such an elite brand.”

Founded in 1972 by Lino Dainese, true to its mission of advocating and delivering safety in dynamic sports, the Company designs advanced protective head-to-toe gear for motorcycling, winter sports, cycling, horse riding and sailing. In 2007 Dainese acquired the iconic premium sport helmet manufacturer AGV, established in 1947. The new Dainese Settantadue brand, established in 2017, reinterprets the design of historic garments that are a part of the stylistic heritage of the Group, with a contemporary twist. Dainese and AGV products represent the technology frontier in the field of protection for dynamic sports and are used by the world’s top athletes including Valentino Rossi and Sofia Goggia, Olympic Champion and winner of the Downhilll World Cup.

Estenson Racing was born out of Team Owner Tim Estenson’s passion for motorcycles and flat track racing. In just their first full year of racing, Estenson Racing quickly established themselves as one of the top non-factory teams in American Flat Track. They reaped success early with an AFT Singles Championship and an X Games Gold Medal and followed that up in 2018 with their first win in the Twins class and multiple wins on the Mile in AFT Singles. Next year the team is more than doubling in size with JD Beach, Jake Johnson and Kolby Carlile in AFT Twins, and Ryan Wells and Dallas Daniels in AFT Singles.

Team Suzuki Press Office – September 19. The third weekend of September sees track action back in force across the globe with Suzuki’s MotoGP GSX-RR, Superbike GSX-R1000 and GSX-R600, plus RM-Z450 and RM-Z250 motocross machines. […]