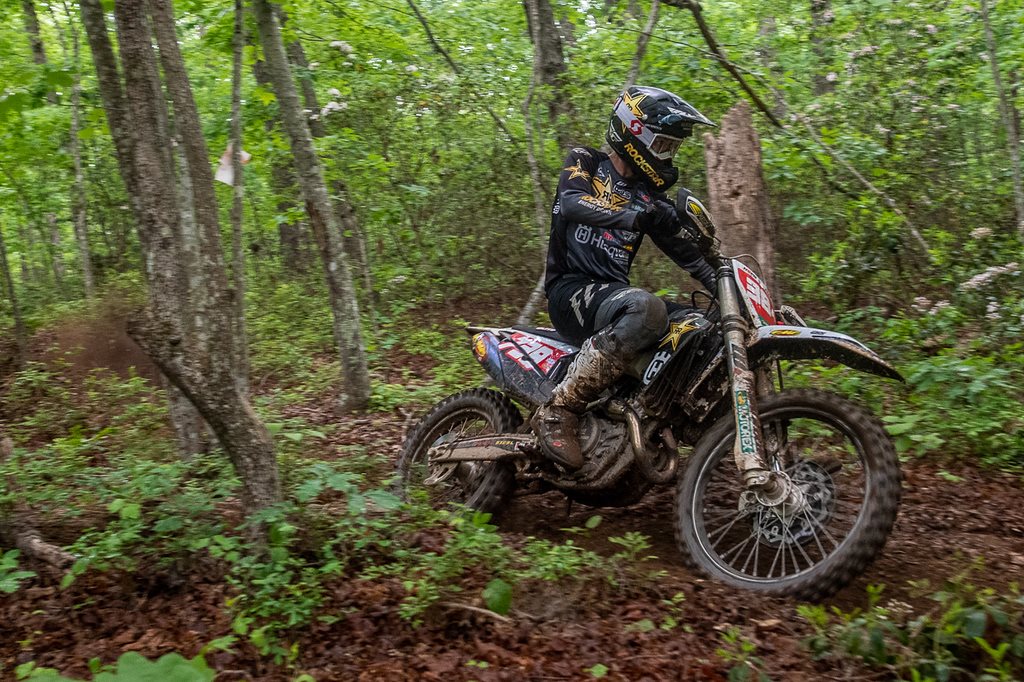 It was a solid day for Rockstar Energy Husqvarna Factory Racing teammates Craig DeLong and Trevor Bollinger, who came away with 5-6 finishes in the NE Pro1 division at Sunday’s Dragon’s Back National Enduro in Arrington, Virginia.
With light rain steadily falling throughout the day, Round 3 of the 2021 AMA National Enduro Series presented riders with a few extra obstacles in the form of traction and visibility. Team rider Craig DeLong found himself behind the eight ball at the start of the day but he put his head down and charged to a sixth-place finish in the first test. In test two, he got into fourth behind his teammate Bollinger and he fought through the slick conditions to maintain fourth. In test three, the Rockstar Energy Husqvarna Factory Racing duo once again found themselves in a close battle but this time it was DeLong edging Bollinger out for fifth by only one second. Heading into the final test of the day, DeLong sat in a three-way battle for fourth overall. He was able to best his teammate Bollinger for fifth overall but it wasn’t enough to overtake fourth at the end of the day.
Craig DeLong: “I struggled a little bit with my bike setup and hitting my marks early on but I changed some stuff up going into the second test and I was more in the hunt. I just kind of rode steady all day and inside my comfort zone, so I’m a little bit disappointed that I wasn’t pushing as hard as I should have. I was in grasp of fourth-place and just kind of let it slip away but it’s something to work on coming into Georgia.”
Bollinger had a stronger start to the day, finishing fifth overall in the opening test and solidifying himself in early podium contention with a third-place finish in test two. He continued his battle with DeLong in the next two tests, finishing just behind his teammate for sixth in both sections. Towards the end of the day, Bollinger struggled with the unpredictable conditions and ultimately lost too much time to DeLong, where he came away with a season-best sixth overall.
Trevor Bollinger: “It was a pretty decent day, we were in the hunt for a top-five finish but we were just a little off. Between fourth and sixth-place, we were all pretty close throughout the day, so it was fun. I can definitely see progress from the last race.”
Next: Round 4 – June 13 – Greensboro, Georgia
Dragon’s Back National Results
NE Pro1 Results
1. Grant Baylor (GAS)
2. Steward Baylor Jr. (YAM)
3. Ben Kelley (KTM)
…
5. Craig DeLong – Rockstar Energy Husqvarna Factory Racing
6. Trevor Bollinger – Rockstar Energy Husqvarna Factory Racing
10. Evan Smith (HQV)
About Michael Le Pard 5838 Articles
"Mr. Totalmotorcycle". Owner and Founder of Total Motorcycle. Supporting over Motorcyclists and Motorcycling for 21 great years. Total Motorcycle is my pride and joy and being able to reach out 330 million people has been incredible but I could not have done it without the support of my visitors, readers and members, thank you so much! You are making a difference to millions of riders worldwide. Thank you.
Website Facebook Instagram Twitter YouTube LinkedIn

DAYTONA BEACH, Fla. (December 16, 2019) – American Honda Motor Co. and Richie Morris Racing have signaled their intention to make an all-out assault on the AFT Singles championship with the blockbuster signing of Henry Wiles to contest the 2020 American Flat […]