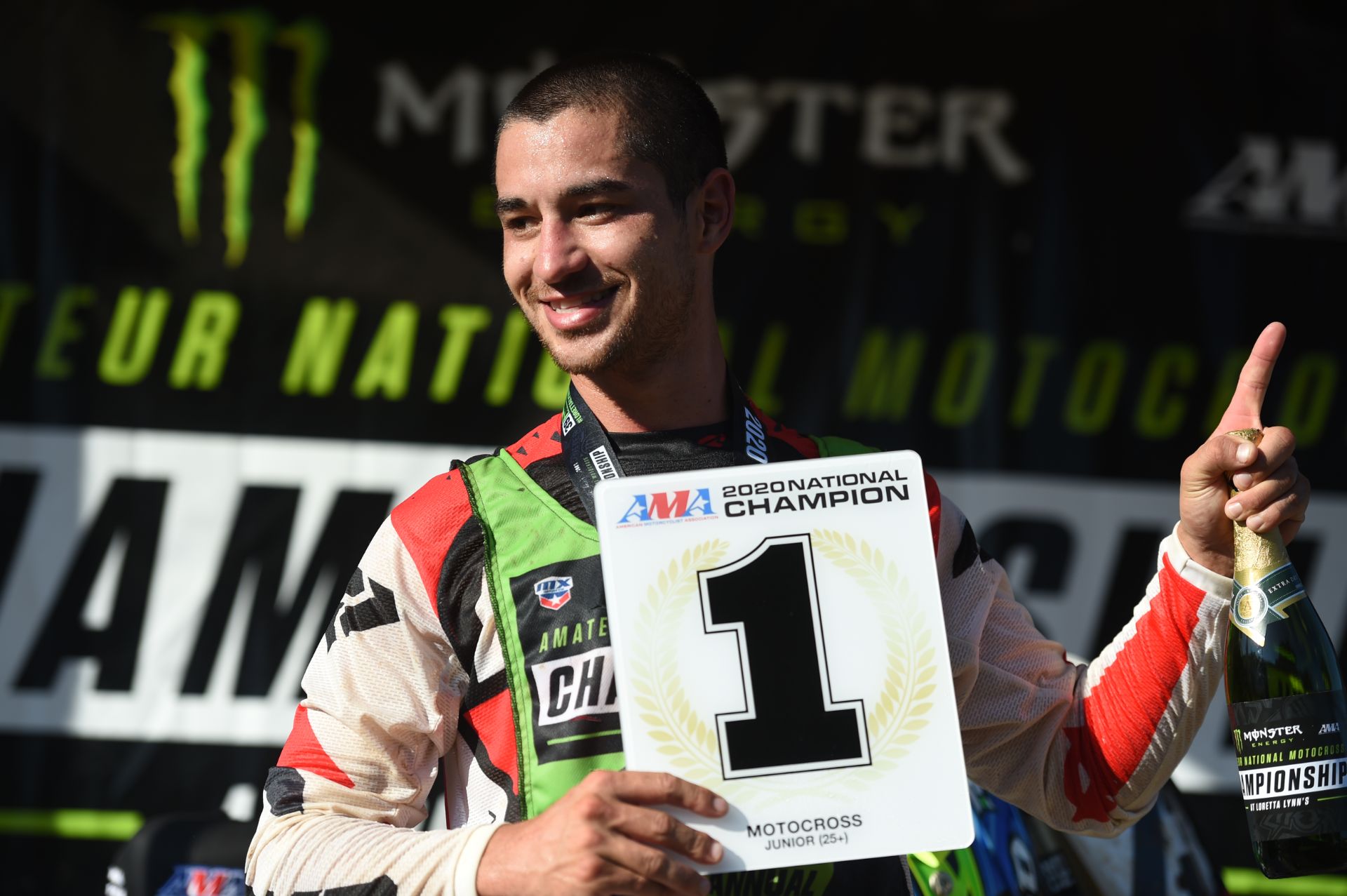 Yamaha’s bLU cRU riders enjoyed another successful week at this year’s running of the AMA Amateur National Motocross Championship at Loretta Lynn’s Ranch with 28-moto wins and eight national titles. Levi Kitchen and Matt Leblanc both had standout performances in Hurricane Mills, Tennessee, winning championships in both of their respective classes.

With a three-moto format to decide who was crowned champion, Kitchen impressed with a sweep of both the 250 B Limited and 450 B Limited classes. The Yamaha Rock River bLU cRU Amateur Motocross Team rider’s dominant performance also earned him the accolade of AMA Amateur Rider of the Year in addition to the two national titles.

“It was awesome,” Kitchen said. “Five out of six holeshots, six-for-six on moto wins, and both championships! I really couldn’t ask for anything more. It went perfectly. That’s what happens when you work hard. I got good starts and just put it all together. I’m so thankful to get the AMA Amateur Rider of the Year award and come away with two titles. I’m going to go home for a little bit, relax and hang out with some family, and we’ll see where it takes me.”

Monster Energy Star Yamaha Racing’s LeBlanc also took home the number-one plate in both of his championships. In the 450 B class, he rebounded from a disappointing third-place finish in the first moto to take victory by nearly four seconds in Moto 2 and entered into the final tied for the lead. Cool under pressure, he worked his way up front and built a comfortable gap on the competition to score his second-straight title in the class. Leblanc got off to a great start in the stacked 250 B class, taking the win by a healthy margin in the first moto and a solid second-place finish in Moto 2. With a four-point lead going into Saturday’s final, consistency proved to pay off as a fifth-place finish sealed the deal for his second title of the week.

“It was pretty good,” LeBlanc said. “I came into the 250 B class thinking that I was going to win, but there were a lot of heavy hitters there. You’ve got like five or six dudes that can run the same lap times the first half of the moto, so it just comes down to who can do it at the end. The first two motos, I did what I had to do so it just set me up for the last moto and I got it done with a 5th. In 450 B, I didn’t get a good gate pick the first moto but I still went 3-1-1. Not the best finishes, but I’m walking away with two championships. I’m going to move up to A class next year and then we’ll probably go pro after that.”

Yamaha Rock River bLU cRU Amateur Motocross Team’s Mason Gonzales put in a solid week. After finishing second in Open Pro Sport Moto 1, he fired back to stand on top of the podium in Thursday’s second moto and head into the final tied for the lead. He got the holeshot in the final moto but came short of the crown in the runner-up spot for second overall in the coveted class with the sport’s top 250 and 450 riders. In the 250 Pro Sport, he got off to a good start with the holeshot in the first two motos, but ultimately crossed the line second and third, respectively. In the final moto, he fought his way back from sixth at the start to take the final podium spot and finish third overall.

Leblanc’s teammate Nick Romano had a rollercoaster ride of a week. The Monster Energy Star Yamaha Racing rider was in the mix of the competitive 250 B class but unfortunately had his work cut out for him after coming together with another rider in the first moto resulting in a 12th-place finish. He kept pushing and managed a pair of third-place finishes to finish fifth overall. In Schoolboy 2, Romano finished fourth in the first moto, but unfortunately, a DNF in Moto 2 made for a difficult run for the title. He rebounded to finish third in the final moto for a fourth-overall finish.

Triangle Cycles bLU cRU Yamaha’s Logan Best finished second overall in both of his classes, crossing the line second in all three Mini Senior 1 Motos and scoring a 2-4-2 tally in the Mini Senior 2 class. Yamaha Rock River bLU cRU Amateur Motocross Team’s Canyon Richards also took home a pair of runner-up finishes in his classes, finishing second in his first two motos and winning his final moto in 65cc (10-11) Limited and a 2-4-1 tally in the 65cc (10-11). In the 65cc (7-9) class, Temecula Powersports Parts Unlimited Moose Yamaha’s Wyatt Thurman finished second overall after his come from behind win in the final moto (6-2-1). Kade Johnson finished third in his first 85cc (10-12) Moto. He fired back with a win in Moto 2, but a fifth-place in the final moto resulted in third overall.

In the 125 C class, Altus Motorsports’ Garrett Alumbaugh impressed with a perfect score, winning all three motos to take the number-one plate. Kris Keefer also had a good week enroute to the crown in the Senior (40+) class. He won his first two motos and secured the title with a second-place finish in Friday’s final moto. After finishing second in the first moto, Branden Scharer scored a pair of wins to take home the Junior (25+) championship. The young Grayson Porco rounds out this year’s Yamaha bLU cRU rider list of champions with a 3-2-2 tally in the 51cc (4-6) Shaft Dr. LTD.

Yamaha extended its lead in the riders’, manufacturers’ and teams’ standings of the 2021 FIM Superbike World Championship in the penultimate round at Circuito San Juan Villicum, Argentina, with Pata Yamaha with Brixx WorldSBK’s Toprak […]

Munich. The BMW Group is using innovative digital technologies to optimise its processes. A good example of this is Blockchain, a technology that enables tamper-proof data sharing, with potential applications throughout the entire automotive value chain. […]