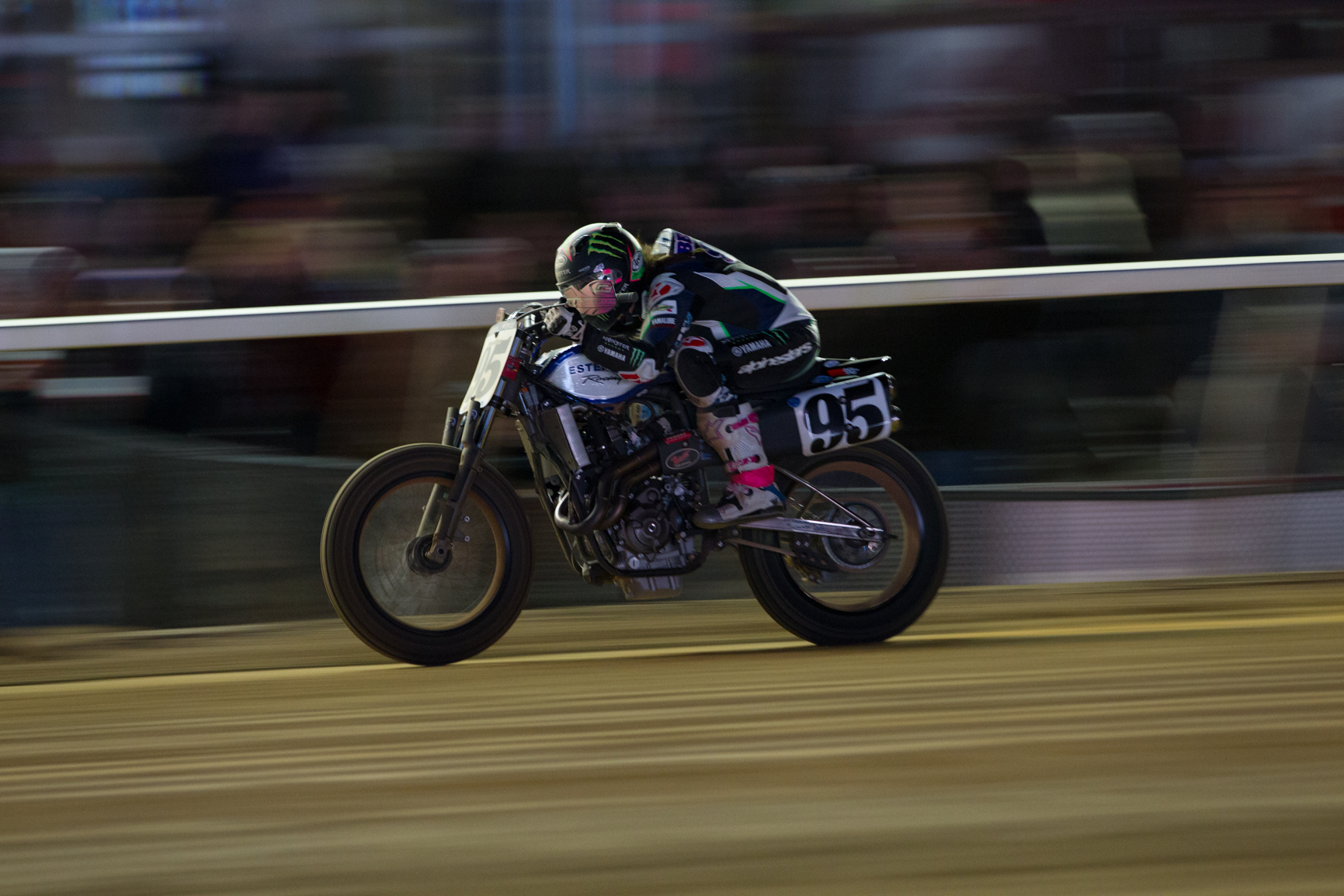 PHOENIX (November 12, 2018) – Estenson Racing is happy to announce that multi-time road race champion JD Beach will be joining the team’s core members – two-time Grand National Champion Jake Johnson and 2017 AFT Singles Champion Kolby Carlile – to provide a three-pronged threat in the AFT Twins class in 2019. This expansion will see Estenson Racing more than doubling its race effort in American Flat Track in just its third full season in the series.

Beach: The Experienced New Teammate
In addition to his two MotoAmerica Supersport titles, JD Beach has banked more wins in the series’ class than any other rider. Beach has additional road race accolades on his resume, both in the U.S. and internationally. In 2008, Beach was the first American to win the Red Bull MotoGP Rookies Cup and in 2010, he won an AMA Pro Supersport title, which was considered the premier U.S. championship for up-and-coming road racers.

Although 2019 marks the first time Beach will be racing full-time for American Flat Track, he has strong dirt track roots and has shown that even though his focus has been on road racing in his professional career, it has not dulled his flat track skills. In his first AFT Twins race since 2013, he scored a podium finish at the 2017 season finale at the Perris Half-Mile and then he backed it up with a second-place finish at the 2018 season opener DAYTONA TT.

Beach looks forward to joining the team in 2019 and riding the Estenson Racing Yamaha MT-07 for an entire season.

“I’m really excited,” Beach said. “This is going to be the first time that I’ve ever done a full season in dirt track, so to compete at every AFT round will be great, and to have a chance to ride for a team like Estenson Racing is great. It’s been a team that has grown a lot, and they have won races and a championship already, so it’s awesome to be a part of it.

“Racing the new Yamaha Twin in dirt track is going to be fun, but it’ll be a challenge, too. There are a lot of Indians out there now, and with (Bryan) Smith going back to Kawasaki for next year is going to make it interesting but fun, too. I think we’re going to have a really good bike. This will the first time that I’ll actually get to test the bike and stuff and get some time on it before I go racing, which will be nice. I think we’re going to be ready when the season starts, and it will be fun to see how I do when I can stay on the same bike throughout the year.”

In addition to a full season of flat track, Beach will still continue road racing, an announcement to come out at a later date.

Johnson: The Seasoned Veteran
Returning for his second season with the team, Jake Johnson brings a wealth of experience to the table. In addition to his two Grand National Championships, Johnson is part of the sport’s elite group to complete a dirt track Grand Slam, and he sits 16th on the all-time win list with 21 wins. Last season, the veteran scored win number 21 at the Buffalo Chip TT, not only marking his first win since 2016, but also the team’s first AFT Twins win. Johnson hopes to build on the late-season momentum he had this year and looks forward to another year with the team in 2019, as well as campaigning an Estenson Racing Yamaha MT-07 for the entire season.

“I’m excited to be back with Estenson Racing for 2019!” Johnson said. “We had our ups and downs last season, but we gained a lot of valuable information and started to build some momentum in the second half of the season. I’m grateful to be able to stay with Estenson Racing for another year and continue to progress. I’m also excited to be competing on Yamahas for the entire season. I jumped around between three brands of motorcycles last season, and I look forward to having 100% focus on the MT-07. It’s going to be a challenge, but I believe the bikes have great potential. I really look forward to off-season testing and heading into next season ready to fight.”

Carlile: The Talented Rookie
Joining the two veterans on the AFT Twins team is Estenson Racing’s youngest rider and its longest standing member Kolby Carlile. The “Flying Tomato” joined the team mid-season in 2017 and brought home the AFT Singles title in the team’s first season. In addition to his title, Carlile scored three wins on the Miles. Now, the former champ looks ahead to the next step in his career – campaigning a Twin in American Flat Track for a full season. The rookie is eager to make that next step with a team who’s support has already brought him a lot of success early on and get acquainted with the MT-07

“I’m beyond excited to step up to the (AFT) Twins class in 2019,” Carlile said. “There is no higher step you can take as far as a career in dirt track goes, so it will be good to see the top of the mountain and watch my progress over the next few years.

“I will be racing the Yamaha MT-07 full time starting now so I can feel at one with it when Daytona comes around. It will be great for me to be able to be on the same bike day in, and day out so that Brandan Bergen (his mechanic) and I can get it built exactly how I want it.

“I wanted to wait until I felt I was ready for this jump. Estenson Racing believes in my ability and is helping me to do what I need to be a competitive racer in the AFT Twins class. I have been able to accomplish more goals in racing than I would have ever imagined when I started racing 10 years ago. I have quite a few goals left, and they are on a Twin.”

Team Owner Tim Estenson couldn’t be happier with his 2019 AFT Twins lineup. The long-time flat track racing/motorcycle enthusiast feels he has the perfect mix between youth and experience, as well as a team with the cohesive, family environment he was looking for.

“I’m really happy to have what I see as an all-star lineup in the AFT Twins class, with a great blend of youth and experience,” Estenson said. “I’m also super-excited to have JD on board. Although flat track has been a part-time gig for his professional career, he’s shown that he is one of the top riders in the sport; and obviously, in road racing as well, as his many championships there have shown. I think his experience will also be a big help in the development of the Yamaha MT-07 and complement the other riders in our program that have been around longer.

“I’m also happy to welcome Jake back for another year. I felt that last season wasn’t the program I had hoped for him. He brings a lot of experience to the team and has had a lot of time on different machines, so I think a solid year on the Yamaha and more testing will pay dividends.

“I saw a lot of promise in Kolby straight away and was happy to commit to giving him the time and tools needed to advance to the premier class. He brought us home a championship in our first season, and I look forward to helping provide him with the right platform for more success in the future.”

The team’s expansion for 2019 is not on the Twins side alone. Stay tuned for our AFT Singles team announcement to come later today.

May 11, 2019 Michael Le Pard News Comments Off on Solid Start in Imola for Van Der Mark as Sickness Strikes Lowes

The Pata Yamaha WorldSBK and GRT Yamaha Supported WorldSBK riders made a solid rather than stellar start on the opening day of proceedings at Round 5 of the FIM Superbike World Championship in Imola. It […]

Match Point to Mahias in WorldSSP at Jerez

October 18, 2017 Michael Le Pard News Comments Off on Match Point to Mahias in WorldSSP at Jerez

GRT Yamaha Official WorldSSP Team’s Lucas Mahias arrives at the penultimate round of the 2017 FIM Supersport World Championship in Jerez this weekend with a chance of being crowned champion. The 28-year-old French rider leads […]