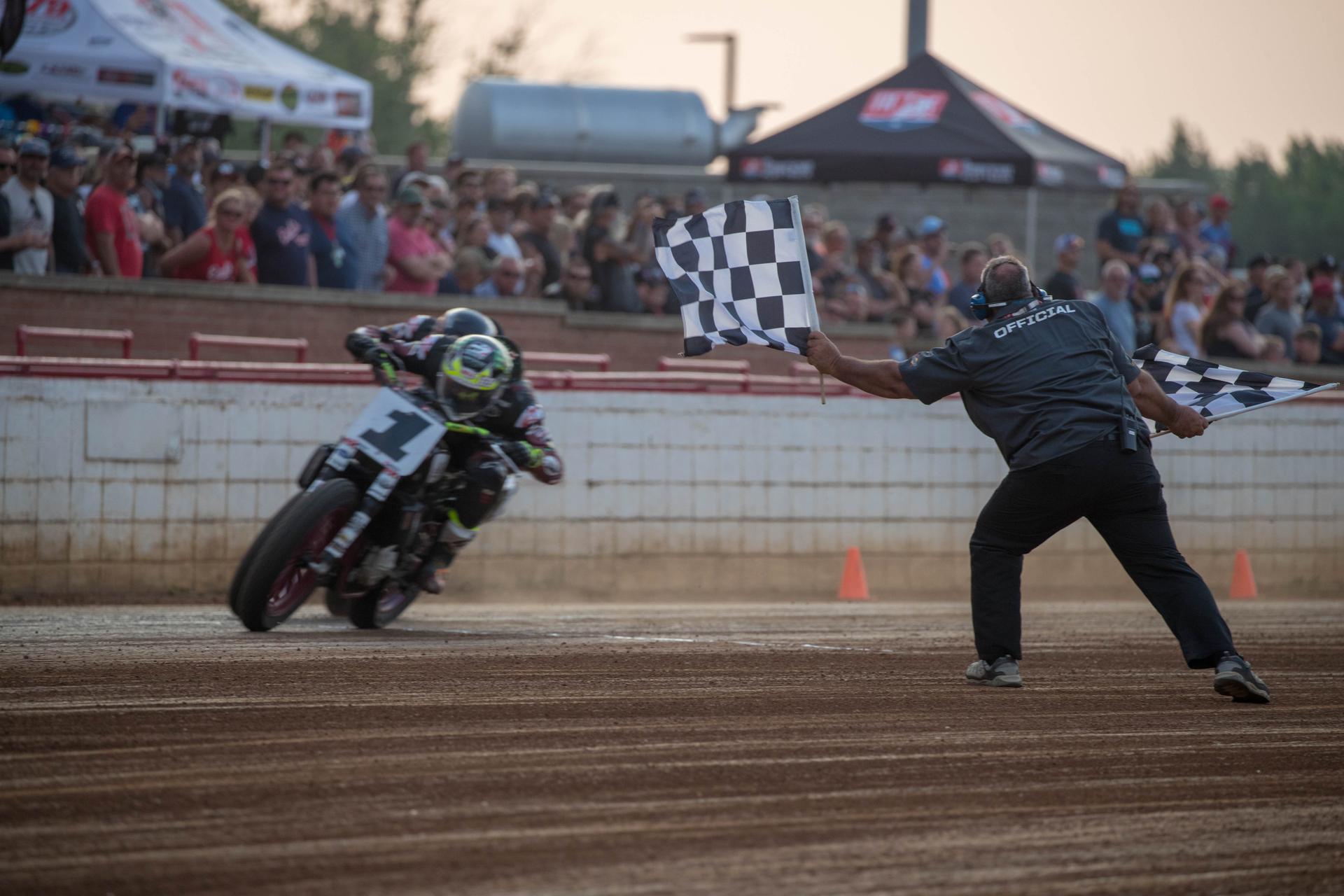 DAYTONA BEACH, Fla. (June 2, 2019) – It required two event postponements and an additional day’s delay on top of that, but American Flat Track finally got in its first Mile of the 2019 season with Sunday’s Indian Motorcycle of Lexington Red Mile in Lexington, Ky.

It was worth the wait.

Mees threatened to turn this year’s edition into a walkaway early in the Main, but Bauman dug deep and tracked the reigning champ down. He closed onto Mees’ rear wheel with ten laps remaining in the once-stopped 25-lap Main, at which point the two promptly went to work.

Bauman leveraged his incredible confidence with the high line to drive around the outside of Mees on multiple occasions, but Mees was always quick to respond with an inside dive or superior drive of his own.

He said, “I started to get a little worried about tires. When we had that red flag, it looked like we were buzzing the tires down pretty good, so I wanted to slow the pace down a little bit and try to ease it off in the corners and keep it inline. I knew if I did that (Briar) was going to catch me. But the Indian Motorcycle has worked so good all day… it’s been so good here the last three years.”

While he couldn’t defeat his rival on this day, Bauman did extend his perfect run of podium results in 2019. He said, “I can’t even put this into words. We’re leading the championship, but at the same time, I’m probably more excited than Jared is right now. This is actually my first Mile podium, and I was able to reel him in and make a race of it for the fans who stuck out the weather. I’m really excited.”

AFT Twins’ resident ‘Mile Master,’ Bryan Smith (No. 4 Crosley Brands/Howerton Motorsports Kawasaki Ninja 650), almost turned it into a three-way scrap on the final lap. Smith proved the time away spent working on his ‘19 package was time well invested as he finished third, just over a second off the victory.

Another 0.186 seconds back was the most impressive Stephen Vanderkuur (No. 21 AMSOIL/Hodder Racing Indian FTR750). Vanderkuur, who only had two prior premier class Main Event starts to his name and a best finish of 15th, tagged along with Smith and put himself in podium contention at the end. He ultimately finished fourth and proved himself capable of running with the best of the best.

Bauman continues to dominate the AFT Twins points standings at 122, but Mees now trails by only 19 points, while Brandon Robinson (No. 44 Kennedy Racing/Armbruster Racing Indian FTR750) retains the third position with a total of 95.

The three traded the positions between them over the race’s opening ten laps, but with four to go, Gauthier made a minor miscue that dropped him into the clutches of the deep pack that was in hot pursuit just behind.

With just Texter to worry about, Rush drafted past his opponent with two to go. He continued to hold down the lead to open the final lap, but at that point, it appeared as if Texter was merely biding her time to line up a last-gasp strike at the flag.

Rush foiled her plans with a string of perfect corner exits, preventing Texter from adding to her long list of career AFT Singles victories.

Runner-up Texter said, “I’m bummed. Honestly, I felt I had Mikey set up really good on that last lap, but I got a little spun up and Mikey got a killer drive. Congrats to him and his team.”

Title leader Jesse Janisch (No. 132 Roof Systems Dallas TX/Öhlins Yamaha YZ450F) finished 11th, tightening up the points race considerably. Janisch still leads at 119, but Rush is now right there at 116, while Gautier is just an additional five points back at 111.

Cory Texter (No. 65 G&G Racing/Holeshot Powersports Yamaha MT-07) continued his unbeaten start to the 2019 AFT Production Twins championship with his third victory in as many tries this season.

Texter was certainly forced to work harder this time out, however, as he found himself in a back-and-forth duel with 2017 AFT Singles champ and the winner of last year’s AFT Singles race at the Red Mile, Kolby Carlile (No. 136 Estenson Racing Yamaha MT-07).

Texter threatened to check out from the race’s opening corner, but Carlile built his momentum to the point that he actually reeled Texter back in and overtook him around the outside at mid-distance of the 15-lap Main.

From that point on, Texter and Carlile contested the lead while working out their last-lap strategies. Ultimately, Texter’s proved superior as he railed together four ideal corners to stretch open up just enough of an advantage to claim the checkered flag relatively unchallenged.

“It feels great,” Texter said. “I’m glad the fans stuck it out and came back out today. We really appreciate their support. It turned out to be a good race. Earlier on today I was struggling so bad, and we went back to a setup I was familiar with. I just tried to trust my instincts more and not overthink things.”

For Carlile, the runner-up result was hugely encouraging considering it was his return to competition following surgery after injuring his knee at the Arizona Super TT.

Ben Lowe (No. 20 Roof Systems/Bruce Lowe Excavating Kawasaki Ninja 650) was the only other rider even in the picture on the final lap. Lowe came home in third and positioned himself close enough to pounce had Texter and Carlile slowed each other down even the slightest bit in the end.

Be sure to catch the feature broadcast of the Indian Motorcycle of Lexington Red Mile on NBCSNwith flag-to-flag coverage of the Main Events, enhanced by exclusive features and cutting-edge aerial drone and onboard footage. The broadcast will debut on Saturday, June 8, at 1:30 p.m. ET/10:30 a.m. PT and will re-air on Tuesday, June 18, at 4:00 p.m. ET/1:00 p.m. PT.

March 2, 2018 Michael Le Pard News Comments Off on Tech3 Duo Kicks Off Final Preparations Ahead of the 2018 Season Strongly

Johann Zarco and Hafizh Syahrin commenced the last pre-season test under the floodlights of the Losail International Circuit in style. The Monster Yamaha Tech3 pair picked up impressively where they left off some days ago […]