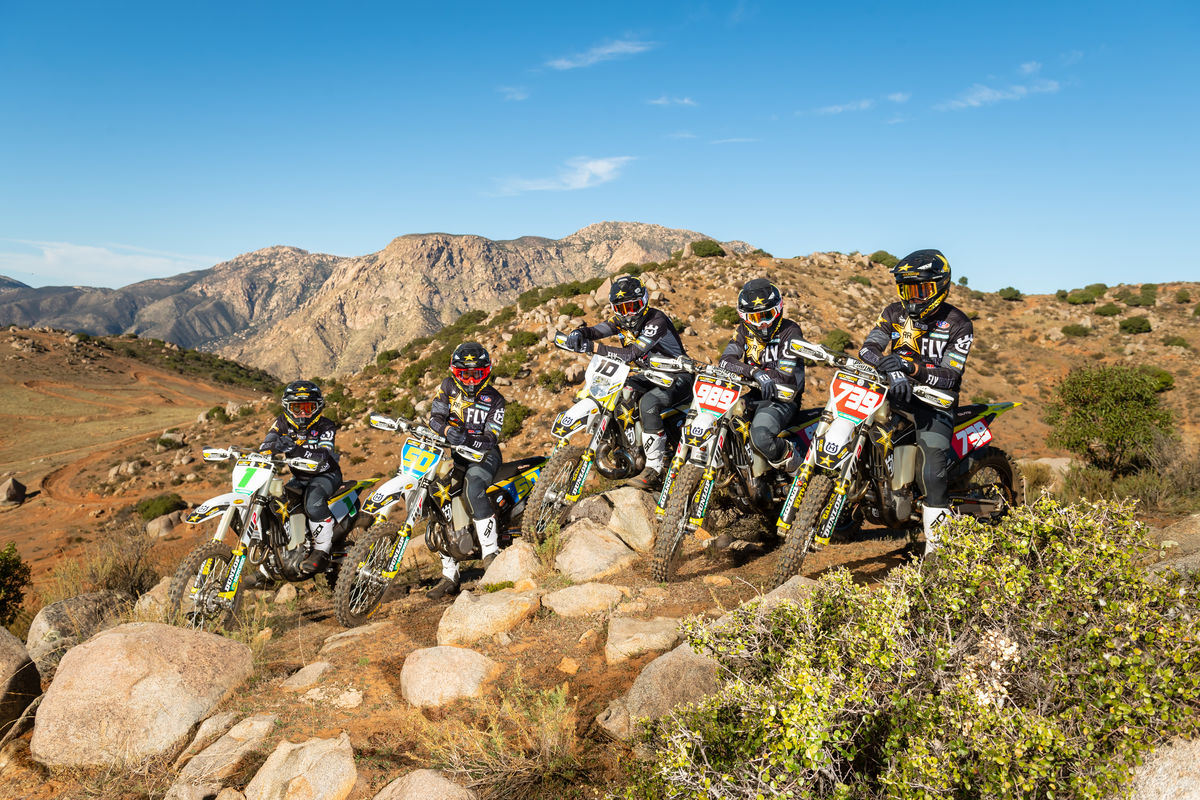 Rockstar Energy Husqvarna Factory Racing has announced its 2021 off-road team lineup, which includes five of the nation’s top riders in their respective disciplines. With seasoned veteran Colton Haaker headlining the team’s Enduro effort for the sixth year, Rockstar Energy Husqvarna Factory Racing also welcomes back Thad DuVall, Trevor Bollinger and Craig DeLong to contest the east coast championships, while Austin Walton is set to represent the west in his second season of premier class racing with the team.
Haaker, one of the most decorated off-road racers in the U.S., will face a hungry field of premier class competition this season as the four-time AMA EnduroCross Champion looks to defend his title once again in 2021 aboard the FX 350. Additionally, as a three-time FIM SuperEnduro World Champion, Haaker will compete in select rounds of the AMA National Extreme Offroad Championship aboard the TE 300i this season.
Thad Duvall heads into the 2021 AMA Grand National Cross Country (GNCC) Series healthy and strong as he returns to the team aboard the FX 350. DuVall missed most of the 2020 championship due to a knee injury but he eased his way back at the end of the season to prepare for an XC1 Open Pro title fight in 2021. DuVall will also compete in the U.S. Sprint Enduro Series this season.
Trevor Bollinger also returns to the team in 2021, racing aboard the FX 450 in the GNCC and AMA National Enduro Championship. Coming off a pair of knee injuries in 2020, Bollinger has been putting in the work to be healthy and ready to go at the start of the season.
Craig DeLong, who clinched the GNCC XC2 250 Pro Championship as well as the National Enduro NE Pro2 title in 2020, will be mixing things up this season in terms of competition. Returning to defend his XC2 title aboard the FC 250, DeLong will make the jump into the AMA National Enduro Championship’s NE Pro1 division where he will line up on the FX 350.
Following a solid debut with the team in 2020, Austin Walton will return this season racing aboard the FX 450 in the World Off-Road Championship Series (WORCS) and the AMA National Grand Prix Championship. With a WORCS overall victory under his belt last season, Walton looks to take his winning experience into the new year as he contests his first-ever title in the premier class.
Tim Weigand, Team Manager: “I am excited for the 2021 season and how the team is structured. Colton and Craig are eager and ready to defend their 2020 championships. It will be great to have Thad back heathy and consistently running up front. Trevor has had some setbacks but is more determined than ever to come back stronger. Austin has a year under his belt now and understands what it takes to run up front so I have no doubts we will see him on the podium often.”
The Rockstar Energy Husqvarna Factory Racing Team will kick off its 2021 off-road race schedule this weekend in Delano, California for Round 1 of the AMA National Grand Prix Championship. For more information on Husqvarna Motorcycles and its athletes, visit www.husqvarna-motorcycles.com.
About Michael Le Pard 5304 Articles
"Mr. Totalmotorcycle". Owner and Founder of Total Motorcycle. Supporting over Motorcyclists and Motorcycling for 21 great years. Total Motorcycle is my pride and joy and being able to reach out 330 million people has been incredible but I could not have done it without the support of my visitors, readers and members, thank you so much! You are making a difference to millions of riders worldwide. Thank you.
Website Facebook Instagram Twitter YouTube LinkedIn

In the first quarter of 2019, the Piaggio Group reported an improvement in performance from the year-earlier period, growth in all the main earnings indicators, a strong increase in Ebit and net profit, higher capital […]