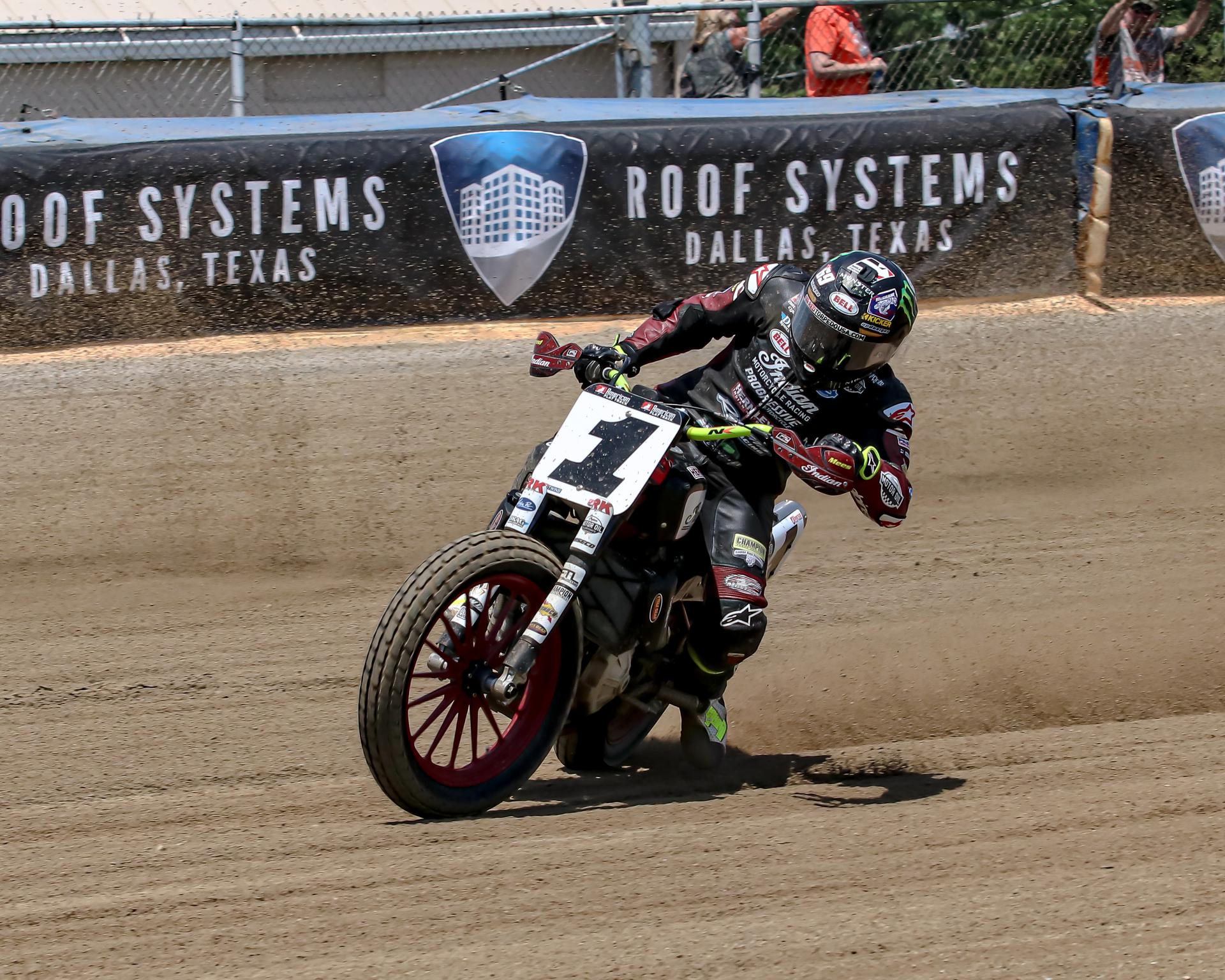 DAYTONA BEACH, Fla. (July 9, 2019) – An epic battle for the 2019 American Flat Track Championship is taking shape as the series approaches its halfway point at this weekend’s New York Short Track in Weedsport, N.Y., on Saturday, July 13.

A clutch performance last time out at the Lima Half-Mile by multi-time defending AFT Twins presented by Vance & Hines king Jared Mees (No. 1 Indian Motorcycle/Progressive Insurance FTR750) saw him instantly transform a daunting 34-point deficit into a significantly more manageable 13-point disadvantage. Perhaps even more crucially, his win also tilted momentum back in his favor heading into Weedsport Speedway and its ⅜-mile, D-shaped oval, where he reigned supreme a year ago.

Mees’ primary title rivals, AFT Twins points leader Briar Bauman (No. 14 Indian Motorcycle/Progressive Insurance FTR750) and third-ranked Brandon Robinson (No. 44 Kennedy Racing/Armbruster Racing Indian FTR750) will be looking to rebound this weekend. Bauman saw his season-long podium streak come to an end at Lima due to an untimely mechanical issue, while Robinson’s recent woes continued as he failed to make the Main at Lima after already cashing in his provisional start. Fortunately for Bauman and Robinson, they are both established Short Track standouts; they each boast a pair of ST victories on their career records, including Robison’s win earlier this year in Atlanta.

The next three riders in the ‘19 championship standings all stand as legitimate threats to win this weekend as well. Fourth-ranked Bronson Bauman (No. 37 Indian Motorcycle/Progressive Insurance FTR750) claimed his maiden win at the inaugural Laconia Short Track less than a month back. Fifth-ranked Henry Wiles (No. 17 Bandit Industries/DPC Racing/Wilco Racing Indian FTR750) needs just one more Short Track victory to eclipse the mark of the legendary Chris Carr (nine wins) and stand alone as AFT’s all-time ST master. While sixth-ranked Jeffrey Carver Jr.(No. 23 Roof-Systems of Dallas/Indian of Metro Milwaukee FTR750) is coming off his best ride of the season and salivating at the prospect of completing the career Grand Slam by adding a ST win to his previously-attained Mile, Half-Mile and TT victories.

Shayna Texter (No. 52 Red Bull KTM Factory Racing SX-F 450) was hugely impressive in her Lima HM win, but Short Track has never been her strongest discipline. If that trend continues, the spotlight could return to the top Roof Systems AFT Singles title contenders.

Points leader Mikey Rush (No. 15 RMR Honda/Red Riders Rewards Honda CRF450R) has proven consistently quick regardless of the venue, and he stood atop the podium at the Laconia Short Track. Second-ranked Dalton Gauthier (No. 122 D&D Cycles/Gobert Smash Husqvarna FC450) has notched up multiple ST wins in his career, including earlier this season in Atlanta, while reigning champ Dan Bromley (No. 1 Red Bull KTM Factory Racing 450 SX-F) stepped his game up with a runner-up showing at Lima and is aiming to secure his first win of the season post haste.

One rider far removed from title contention who could add some serious spice to the proceedings is Tanner Dean (No. 38 Godzilla Honda Honda CRF450R). Dean sits just 16th in the Roof Systems AFT Singles championship order with an eighth-place at the Red Mile standing as his only top ten of the season. However, he also has a track record of coming out of nowhere to prove nearly unbeatable on any given Saturday night. Last season, Dean had no top tens through ten rounds before promptly winning at Weedsport Speedway. The year before that, he scored his maiden victory during the second half of the 2017 season at the Calistoga Half-Mile with no prior career top tens to his name.

In addition to the AFT Twins and Roof Systems AFT Singles action, the New York Short Track will feature the Astro Invitational, pitting former pros and vintage flat track competitors against one another on Bultaco Astros to benefit the Rookies of ‘79 charity to help injured racers.

The New York Short Track festivities get underway in earnest at the track on Friday, July 12, with the Kick Off Party & Bike Night Friday from 6:00 p.m. to 9:00 p.m. ET, featuring live music, food, local craft beer and wine specials and autograph sessions with a number of AFT’s leading riders.

The DownBeat Percussion Drumline will perform at the Kick Off Party, while fans will be given the opportunity to walk the track, win various prizes, and play games. Bikes, including the Astro machines, will be on display, and AFT merchandise will be available for purchase.