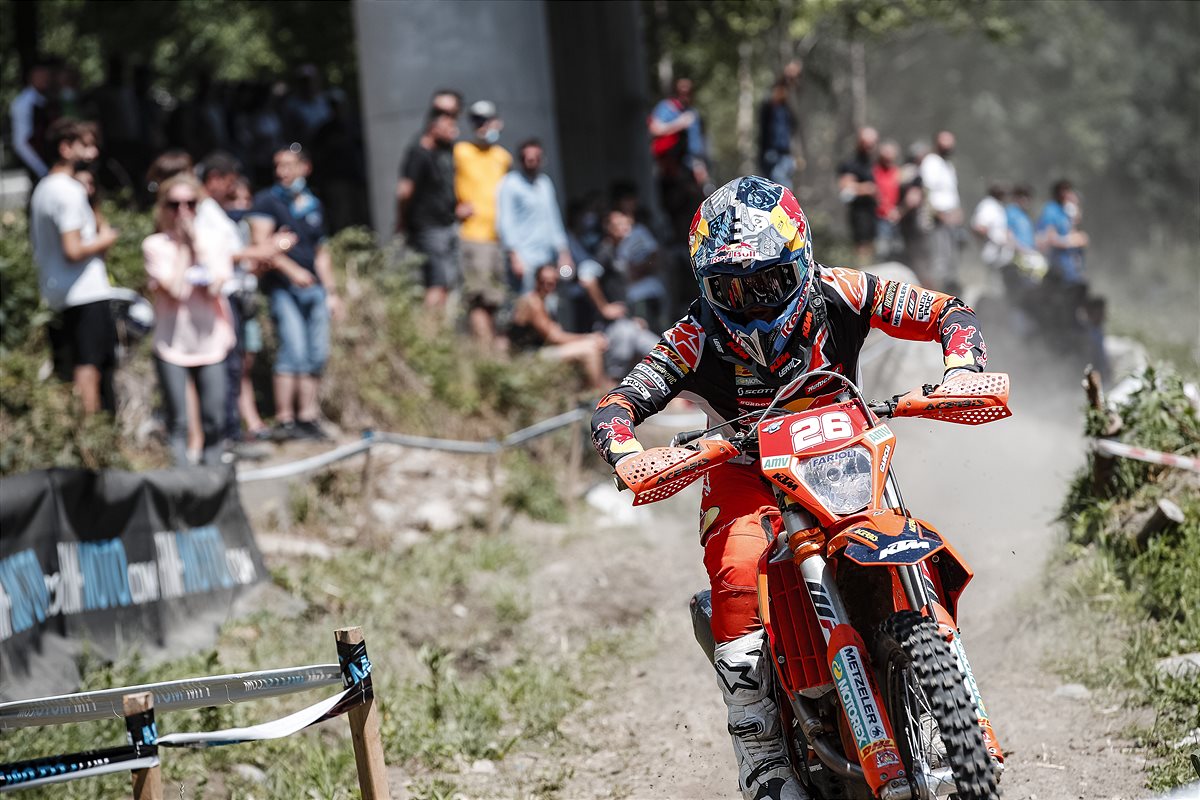 Just one week on from the tough opening event of the 2021 FIM Enduro World Championship, riders were back in action at an equally challenging round two, held in Edolo, Italy. Following Friday evening’s short Super Test, competitors faced two demanding days of competition, covering four laps of a 30-kilometer route each day, and including four enduro, cross, and extreme tests each lap. With the track becoming increasingly cut up on Sunday, the race delivered a huge test, both physically and technically, for all.

Maintaining the momentum that took him to a double Enduro2 class podium at round one in Portugal, Josep Garcia immediately got to work in Italy, challenging for the podium positions. A couple of mistakes cost him some time early on Saturday, but the Spaniard was able to regroup and put in a number of impressive test results, which helped him climb back up to the runner-up position at the end of the day.

With the tests becoming a lot rougher for Sunday’s racing, Garcia kept his head down and delivered a strong, consistent performance that saw the KTM 350 EXC-F rider ultimately place third in E2, just over 14 seconds from second place, after an hour of racing against the clock. Following two rounds of competition, Josep now lies third in the Enduro2 category and fourth overall in EnduroGP.

Josep Garcia: “Day one didn’t start so well for me, I had two crashes on the enduro test and from those mistakes I lost some time to the leaders and had to really push for the rest of the day, to make that lost time back up again. After that first lap, I was able to find a good rhythm and didn’t make too many more errors, but my pace still wasn’t quite where I wanted it to be. Day two was similar, I made a couple of mistakes, which cost me some time, especially on the enduro test. The cross tests and the extreme tests are going well, I’m not quite there at the top, but the times are ok. It’s the enduro test where I seem to be finding it tough to match the others. Overall, the first two rounds of the championship have been positive but not exactly how I expected them to go. I know what areas I need to work on though, and with almost three weeks until the next race, I will try and concentrate on that and come back stronger in Estonia.”

Making a wildcard appearance in the Enduro World Championship, Manuel Lettenbichler enjoyed a strong first day of competition in Edolo, posting several top-five results in the technically demanding extreme tests. The German hard enduro star put in a superb performance to complete the day as seventh fastest in the Enduro2 class, and inside the top 20 in EnduroGP, claiming 17th. Unfortunately, and despite starting off strongly again on Sunday, Lettenbichler was unable to complete the day after a technical issue forced him to retire. Mani now looks ahead to round three of the FIM Hard Enduro World Championship on July 10.

Manuel Lettenbichler: “It’s been really cool to race here in Italy in front of the Italian fans – it definitely feels good to see the crowds lining the track again. I struggled a little with my suspension set-up on day one – it’s the first time I’ve raced the 450 in conditions like this, so I was trying to find a good set-up. Obviously, I’m disappointed not to have finished the event after dropping out on day two, but that’s racing and on the whole I enjoyed it and had a really good time trying something different.”

The 2021 FIM Enduro World Championship continues with round three – the GP of Estonia – on July 16-18.

Championship Standings (After Round 2)

The FIM Superbike World Championship was at the Misano World Circuit last weekend for round three of 2021, where Yamaha returned to the top step for the first time this season courtesy of Pata Yamaha […]