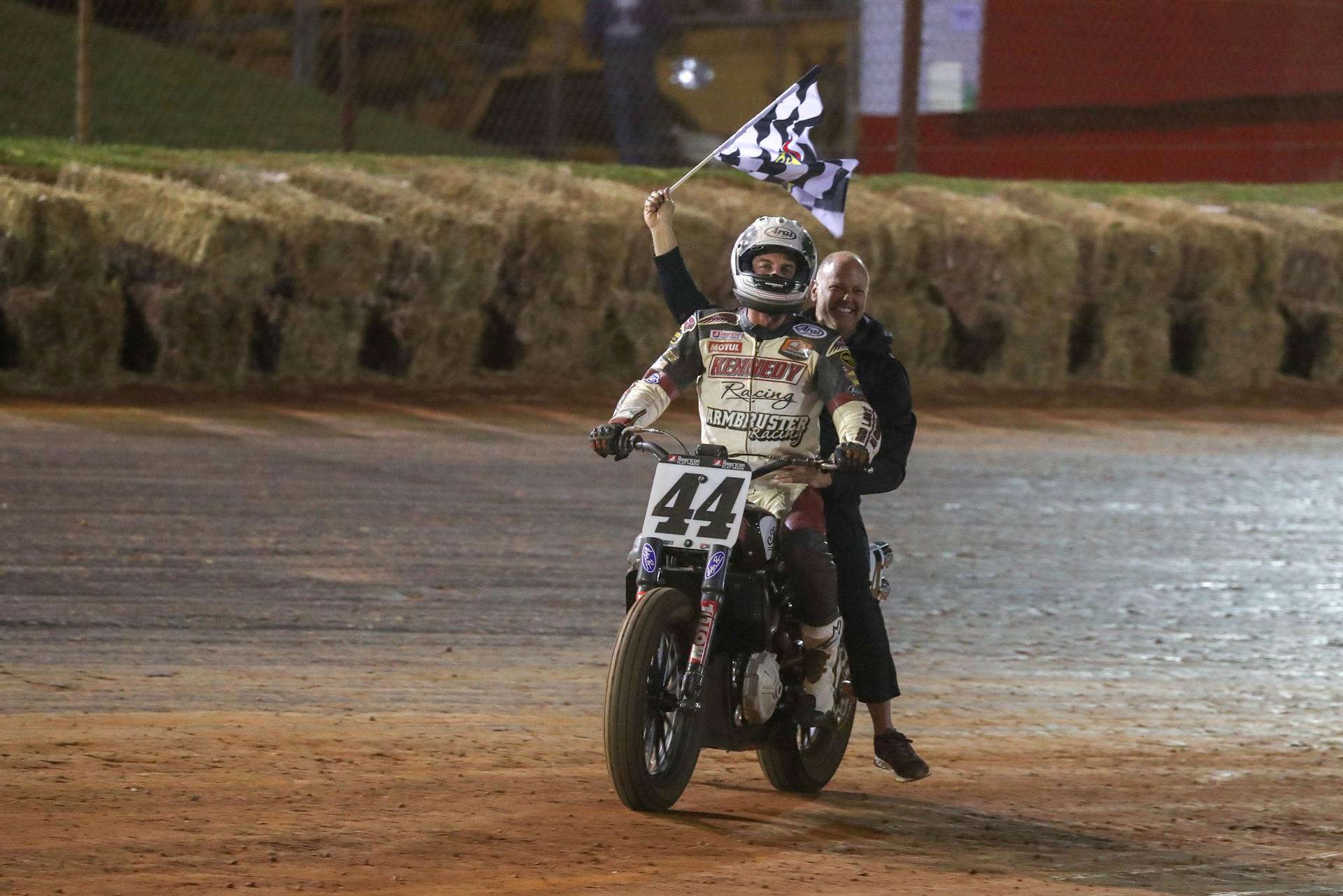 Prior to Robinson’s heroics, Mees appeared set to issue a stark reminder of that dominance when he broke free early and worked up a gap to separate him from the remainder of the field. However, Robinson slowly reeled Mees in throughout the Main, finally arriving on the champ’s rear wheel with just over five laps remaining.

On lap 22 of 25, Robinson made the race’s decisive maneuver, pulling off a skillful outside overtake to steal away the position. Mees had no response, as Robinson immediately dropped him en route to a 0.621-second margin of victory.

The victory marks Robinson’s first AFT Twins triumph since he won the Lima Half Mile midway through the 2016 season. He said, “Timing was everything. Jared is one of the smartest, toughest competitors on the circuit. I knew if I showed my cards too early, he could make a countermove and try to get me back. I just waited. He had a little mishap, and I was able to roll around the outside of him. I just put my head down and set sail those last couple laps and tried to be as smooth as possible and everything just played out perfectly. I’m stoked right now — this is awesome!”

Heading into the Main Event, DAYTONA TT winner Briar Bauman (No. 14 Indian Motorcycle/Progressive Insurance FTR750) appeared capable of carrying that season-opening momentum like a freight train. He ranked near the top of the charts all day and won his semi with relative ease. However, a difficult start in the Main threw him into a frenetic fight for position.

At the end of the evening, he emerged on the podium with a hard-earned third after running as low as eighth early in the race. However, Bauman was never in contention for the win and finished nearly three seconds back of Robinson.

Returning to the scene of his last Roof Systems AFT Singles presented by Russ Brown Motorcycle Attorneys victory before being forced to serve a suspension for violating the sanctioning body’s substance abuse policy for the better part of the 2017 and 2018 seasons, Gauthier registered a towering victory in Saturday night’s 15-lap Main Event.

Gauthier leapt out to the lead early and was never seriously challenged, upping his advantage to over a second before easing off slightly to secure the checkered flag.

If the “Comeback Kid’s” runner-up result in the season-opening DAYTONA TT didn’t serve as warning enough to the AFT Singles field for what they were up against in his return, they understand now.

After finally taking that final step — the top step on the podium to be clear — Gauthier said, “It’s a crazy feeling — I was out for two seasons. I won here in 2017, and thought I could do some damage today, honestly. I was fast qualifier, won the heat race, won the semi — just like 2017. And then I got the holeshot, led every lap, and won the Main. It’s a pretty awesome feeling. I can’t thank (tuner) Rob Mclendon enough for everything he’s done for me.”

If anyone had any hope of beating Gauthier on this night, it was Morgen Mischler (No. 69 Waters Autobody Racing/D&D Powersports KTM 450 SX-F). That is until he was swamped leaving the line and found himself buried in the pack as they stormed into Turn 1.

Mischler was in astonishing form from there, making quick work of some of the best flat trackers on the planet to slash his way up to second. However, running down Gauthier was simply too big of a task.

The last rider Mischler made his way past on his way to second was reigning AFT Singles champion Dan Bromley (No. 1 Red Bull KTM Factory Racing 450 SX-F). Bromley just continued to do what he does — collecting yet another podium result to put toward his title defense. After earning last year’s crown on the strength of 13 podiums in 18 races, Bromley is now two for two in 2019.

Be sure to tune into the feature telecast of the DAYTONA TT presented by Russ Brown Motorcycle Attorneys tomorrow at 4:00 p.m. ET/1:00 p.m. PT on NBCSN.

The first ever FIM World Superbike race in Argentina proved a challenging one for the Pata Yamaha Official WorldSBK Team’s Alex Lowes and Michael van der Mark today. Lowes was disappointed with seventh place at […]