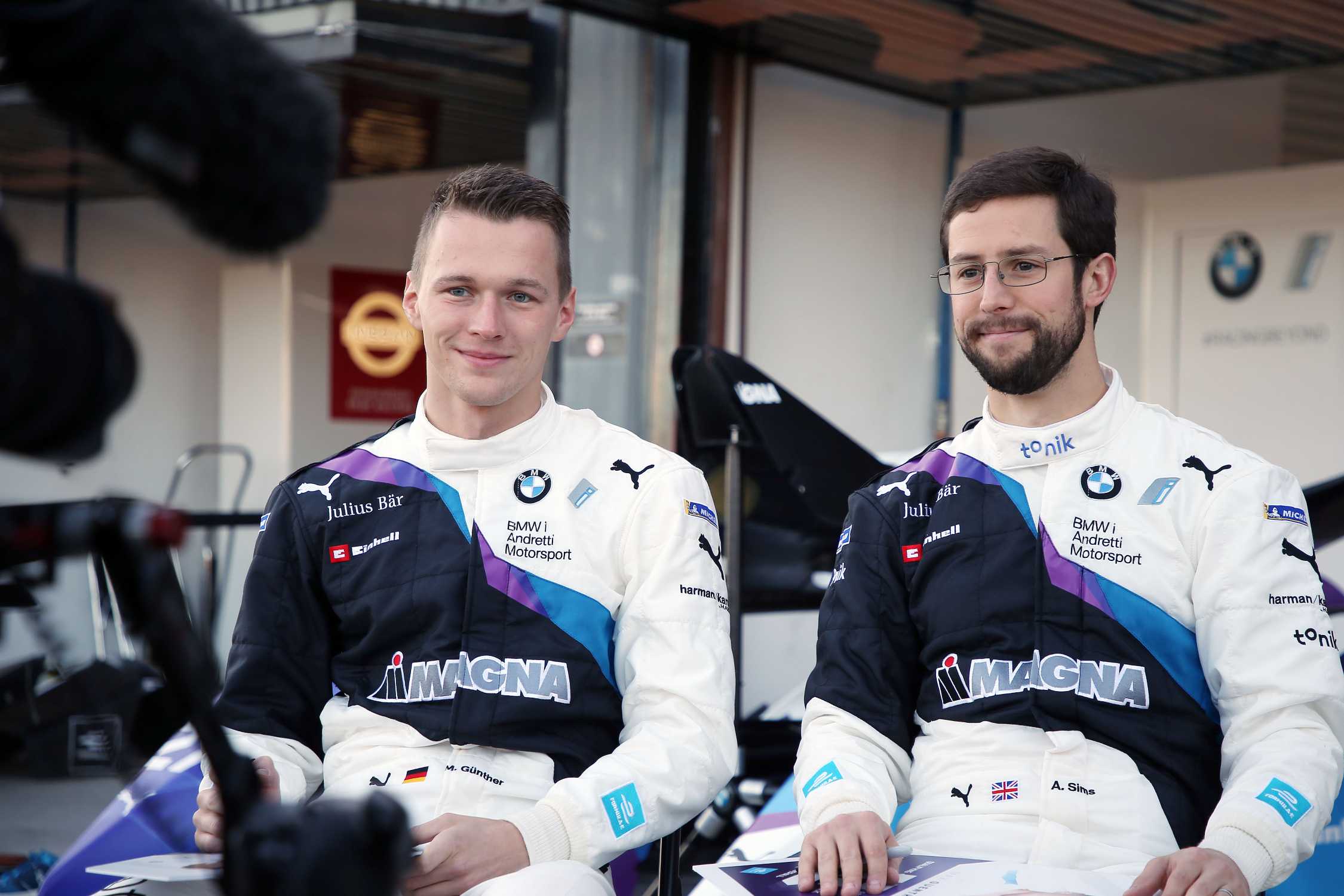 Munich. While Season 6 of the ABB FIA Formula E Championship has been parked up since the Marrakesh E-Prix (MAR) at the end of February, the virtual season of the “ABB Formula E Race at Home Challenge” has only just begun, with victory for Maximilian Günther (GER). Like their fellow Formula E Drivers, he and Alexander Sims (GBR) are passing the race-free time with weekly eSports events. Despite this, everyone remains hopeful that they will be able to resume and complete the real season at some time in the foreseeable future. Season 6 had started well, with two pole positions and a win for Sims, while Günther had secured one victory and a second place. This has put them in third and fourth place respectively in the Drivers’ Championship, with BMW i Andretti Motorsport currently second in the Team standings. In a double interview, Günther and Sims discuss the start of the virtual Formula E season, their record in the real races held so far, the strengths of the team and car, and the prospects of a return to the racetrack.

Maximilian, Alexander, you are both back out on the track – albeit only virtually for the moment. One race in, what is your impression of the “ABB Formula E Race at Home Challenge”?

Maximilian Günther: “Firstly, it is unusual for our races to be virtual ones. However, we are all competitive people and currently have no other way of competing against each other on the racetrack. As such, the Race at Home Challenge is a great opportunity for us – and, in my opinion, some of the graphics are astonishingly realistic.”

Alexander Sims: “Sim racing is completely new territory for me. As such, I have gone into the races with relatively low expectations. However, it is great fun to dip into the virtual world and get a little of that competitive feeling, which is otherwise missing at the moment. Besides that, I get the feeling that Maximilian is damned quick.” (laughs)

You said that after the test round. What made it so clear from the onset?

Sims: “I get to see him very often in the BMW Motorsport simulator as part of our preparations for every single real Formula E race, and I can tell that he is far faster in the simulator than I am. Fortunately, we are at the same level on the real racetrack, but Maximilian clearly has far more experience than me in the simulator – partly because he has done simulator work in other teams in the past. He also started sim racing earlier than I did. All this is plain to see from his fantastic results at the moment.”

Maximilian, what do you feel makes you so good at sim racing?

Günther: “I have always been good at adapting quickly to new circumstances. That obviously helps hugely when, as I did, you only started sim racing a few weeks ago. You could see in the test round and the opening race that all the Formula E drivers initially took some time to suss out the limit of the simulation. I think we will all improve from race to race in that regard. As such, I believe the races will also be closer.”

What expectations do you have ahead of the next race on the Formula E Test Track this Saturday, with which the public is not yet familiar?

Günther: “Actually, I have never driven there before either, but I do know the layout. It looks fast. I will stick with my approach: to get the maximum out of every race I compete in. If that is a win, as it was most recently, that is excellent. However, that does not automatically mean I now expect to win every race.”

Sims: “I am not sure whether I might by chance have driven on the track with my son – but I may well be mistaken. (Laughs) As I don’t yet know anything about the circuit, I do not have any definite expectations. It went very well for me in Hong Kong – I would like to back that up now.”

Links to the live streams of round two of the “ABB Formula E Race at Home Challenge” (Saturday, as of 16:30 CEST):

Alexander, you only started using your race simulator shortly before the start of the Race at Home Challenge. Why so late?

Sims: “Because I am also leading the normal family life of a father. (Laughs) That is obviously fantastic for me personally, but does not leave me so much time for training in the simulator as one or two of my fellow drivers may have.”

How realistic is virtual Formula E compared to the BMW Motorsport simulator?

Sims: “You can hardly compare them. With the game, I think the priority is to have fun driving in the simulator – which you really do. For me as a driver, the graphics also give you some of that real Formula E feeling. In the BMW Motorsport simulator, however, it is all about recreating the reality of the driving experience and driver environment, right down to the smallest detail, in order to acquire real knowledge for actual race outings. That is a completely different spec of simulator. It is an advanced one-off, developed by BMW Motorsport themselves, while the other is produced for the general public.”

Günther: “They are indeed two very different animals. As realistic as the simulation in the Race at Home Challenge may be from the cockpit perspective, the BMW Motorsport simulator in Munich is far more sophisticated in many areas.”

Generally speaking, how good does it feel to be back in the Formula E environment and driving the BMW iFE.20 again – albeit only virtually?

Günther: “It feels good. None of us know when and how we will be able to resume real racing. In a situation like this, it is fun to at least return to a little Formula E normality on the simulator.”

Sims: “It is just nice to be involved, to do battle with familiar faces on the track, to feel a little of that adrenalin, and to exchange a few words every so often on webcam and the microphone. Otherwise, you definitely miss that interaction during the break from racing.”

When the real Formula E season was suspended after the Marrakesh E-Prix, you were third and fourth in the Drivers’ Championship. What is behind your strong start to the season?

Sims: “To be honest, it could have been even better. The opening weekend in Diriyah was fantastic for me, with two pole positions and the win on the Saturday. That was partly because the BMW iFE.20 was fantastic, and partly because I was more experienced coming into my second season, and was able to use that experience to my advantage. After that, the car was always strong, but we definitely missed out on some possible points in Santiago and Marrakesh.”

Günther: “Although I was new to the team, things were already going well by the tests, at which I set the fastest time. The team and I were immediately on the same wavelength. In particular, the communication with my engineers has been superb from the word go – something that you cannot take for granted when you are new to a team. Generally speaking, I have the impression that there is an excellent atmosphere at BMW i Andretti Motorsport, which, together with hard work, has contributed to the success.”

The BMW iFE.20 has made a good impression at all the circuits so far. What makes the car so special?

Günther: “So far, we have always had a good car in qualifying, which has allowed us to start from well up the grid. This is key to getting good results in Formula E. In the races, we have a car with very good energy efficiency, which we are able to take full advantage of through clever strategic decisions. That was apparent in my victory in Santiago, as well as in Marrakesh and Diriyah, where I thought I had claimed my maiden podium before I lost it as a result of a penalty.”

Sims: “I agree with Maximilian. The BMW iFE.20 gives us a good overall package, consisting of strong qualifying performance and good efficiency in the race. Maybe we do not have the best car in terms of raw speed, compared to our rivals at Techeetah and Jaguar, but our overall package means we are on a par with them. The BMW iFE.20 gives us a nice feeling of being able to compete for the top positions in every race.”

In your opinion, where has BMW i Andretti Motorsport improved compared to Season 5?

Sims: “I think one advantage is that there is a lot of continuity in the personnel, which has allowed the team as a whole to learn a lot from the experience it gained in Season 5. A lot of our success is based on teamwork. Thanks to our engineers, I believe we have now reached a top level – particularly in terms of the software – which really helps us to make the right decisions in the races. Our experience also allows us to understand the car better, which means we have a far better success rate when it comes to finding the right set-up for the respective circuits. That is absolutely vital in Formula E, as you have so little time on the race day itself that you are basically no longer able to correct any mistakes you may have made during the preparations.”

Races without spectators or on permanent racetracks: Formula E is considering many scenarios, in order to complete Season 6. What do you make of it all?

Günther: “Firstly: I think it is fantastic to drive in front of as many fans as possible at the racetrack. That is what it is ultimately all about – to travel to the fans in the various cities and to put on a great show for them. Unfortunately, Formula E races as we know and love them are unrealistic at the moment. As such, I support the idea of both races behind closed doors and on permanent racetracks. That is not ideal for any of us, but seems to be the only chance of going racing again in the foreseeable future.”

Sims: “As the alternative to racing without spectators or on permanent racetracks seems to be not to race at all anymore, I am sure that any racing driver will be in favour of giving that a go. In the current situation, it is vital to be able to guarantee a safe way of doing things. Permanent racetracks can also help in that regard. Let’s just hope that this is only a temporary solution and that we can gradually return to the normal Formula E races we all love – in big cities and in front of thousands of spectators.”

MIR FIGHTS TO 5TH IN PHILLIP ISLAND AS RINS 9TH