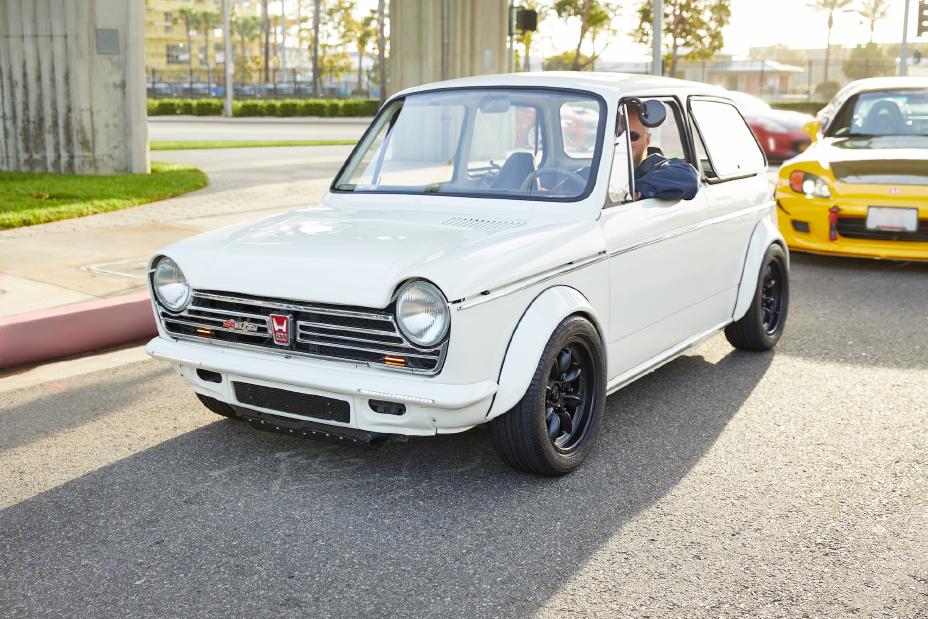 Honda today announced that a 1972 Honda N600 owned by Stephen Mines has won the first-ever Honda Super Tuner Legends Series, which joined the Hot Wheels™ Legends Tour in 2019 as the exclusive tuner component of the program. Customized over a five-year period, the Honda N600 is powered by a Honda VFR 800cc V4 motorcycle engine in a rear wheel drive configuration, sporting a 12,000 RPM redline and a surprisingly deep and growly engine sound.

“When I arrived at the Hot Wheels™ Legends Tour, I was truly impressed by the amount of work from the other Honda tuners. I’m thrilled, and humbled, that my N600 not only stood out, but was selected as the winner of the first-ever Honda Super Tuner Legends Series,” said Stephen Mines, owner of the winning N600. “As a longtime Honda fan, and owner of more than a few Hondas, it will be an incredible honor to see my car at Honda’s booth at SEMA.”

The other three finalists for the 2019 Honda Super Tuner Legends Series included a:

Honda N600
After a decade of growth that led to Honda becoming the top-selling motorcycle manufacturer in America and the world, Honda began automobile sales in U.S. in 1970 with the Honda N600, with a starting price of $1,300. At just 122 inches in length, the N600 was small enough to fit between the front and rear wheels of some full-size American passenger cars of the time.

The N600 had an all-alloy engine with a 9,000 rpm redline that could propel the N600 to speeds of up to 81 miles per hour. A simple, yet skillfully designed vehicle, the N600 was nimble and fuel-efficient, characteristics it shares with today’s Hondas, helping pave the way for the quality and reliability for which Honda vehicles have become known.

Honda Tuner Vehicles
Honda vehicles are favorites of car enthusiasts and “tuners” – owners who customize their vehicles with third-party parts to personalize the appearance and performance. For many years, Honda has celebrated this relationship at the annual SEMA Show in Las Vegas, and at other exhibitions and rallies, honoring those who make Honda vehicles an expression of their unique personality. This commitment includes the creation of Honda Factory Performance accessories that offer vehicle owners the ability to personalize their builds, while enhancing appearance, performance and functionality.

Honda Super Tuner Legends Series
The first-ever Honda Super Tuner Legends Series kicked off in El Segundo, Calif., in May 2019, as an extension of the second annual Hot Wheels™ Legends Tour, a national search for a life-size custom car worthy of being immortalized as a Hot Wheels™ toy car. Local Honda enthusiasts entered their custom-tuned Hondas in the hopes of being selected as one of four finalists competing for the “Honda Super Tuner” title and the opportunity to have their vehicle displayed at the SEMA Show – the industry’s premier automotive specialty products trade event – in Las Vegas from November 5-8, 2019.

The Honda Super Tuner Legends Series made select stops along the Legends Tour: El Segundo, Calif. on May 18, Seattle on Aug. 24, Denver on Sept. 14, and Santa Clarita, Calif. on Oct. 19.

For More Information
Consumer information is available at automobiles.honda.com. To join the Honda community on Facebook, visit facebook.com/honda. Additional media information including detailed pricing features and high-resolution photography of all 2019 Honda models is available at hondanews.com.

About Honda
Honda marked its 60th anniversary in America in June 2019, and 40 years of production in America in Sept. 2019. Honda established its first U.S. business operation in Los Angeles in 1959. Today, Honda employs more than 31,000 associates in the development, manufacturing, sales and servicing of Honda and Acura automobiles, Honda power equipment and powersports products, the HondaJet advanced light jet and GE Honda HF120 turbofan engines.

Honda offers a full line of reliable, fuel-efficient and fun-to-drive vehicles with advanced safety technologies sold through over 1,000 independent U.S. Honda dealers. The Honda lineup includes the Fit, Civic, Insight, Accord and Clarity series passenger cars, along with the HR-V, CR-V, Passport and Pilot sport utility vehicles, the Ridgeline pickup and the Odyssey minivan.

Honda has been producing automobiles in America for more than 35 years and currently operates 19 major manufacturing facilities in North America. In 2018, more than 90 percent of all Honda brand vehicles sold in the U.S. were made in North America, using domestic and globally sourced parts.

About Mattel
Mattel (NASDAQ: MAT) is a leading global children’s entertainment company that specializes in design and production of quality toys and consumer products. We create innovative products and experiences that inspire, entertain and develop children through play. We engage consumers through our portfolio of iconic franchises, including Barbie®, Hot Wheels®, American Girl®, Fisher-Price®, Thomas & Friends® and MEGA®, as well as other popular brands that we own or license in partnership with global entertainment companies. Our offerings include film and television content, gaming, music and live events. We operate in 40 locations and sell products in more than 150 countries in collaboration with the world’s leading retail and technology companies. Since its founding in 1945, Mattel is proud to be a trusted partner in exploring the wonder of childhood and empowering kids to reach their full potential. Visit us online at www.mattel.com.

About Michael Le Pard 7450 Articles
"Mr. Totalmotorcycle". Owner and Founder of Total Motorcycle. Supporting over Motorcyclists and Motorcycling for 23 great years. Total Motorcycle is my pride and joy and being able to reach out 375 million people has been incredible but I could not have done it without the support of my visitors, readers and members, thank you so much! You are making a difference to millions of riders worldwide. Thank you.
Website Facebook Instagram Twitter YouTube LinkedIn

ALEX RINS RISES TO THE TOP ON DAY 1 IN SEPANG

November 2, 2018 Michael Le Pard News Comments Off on ALEX RINS RISES TO THE TOP ON DAY 1 IN SEPANG