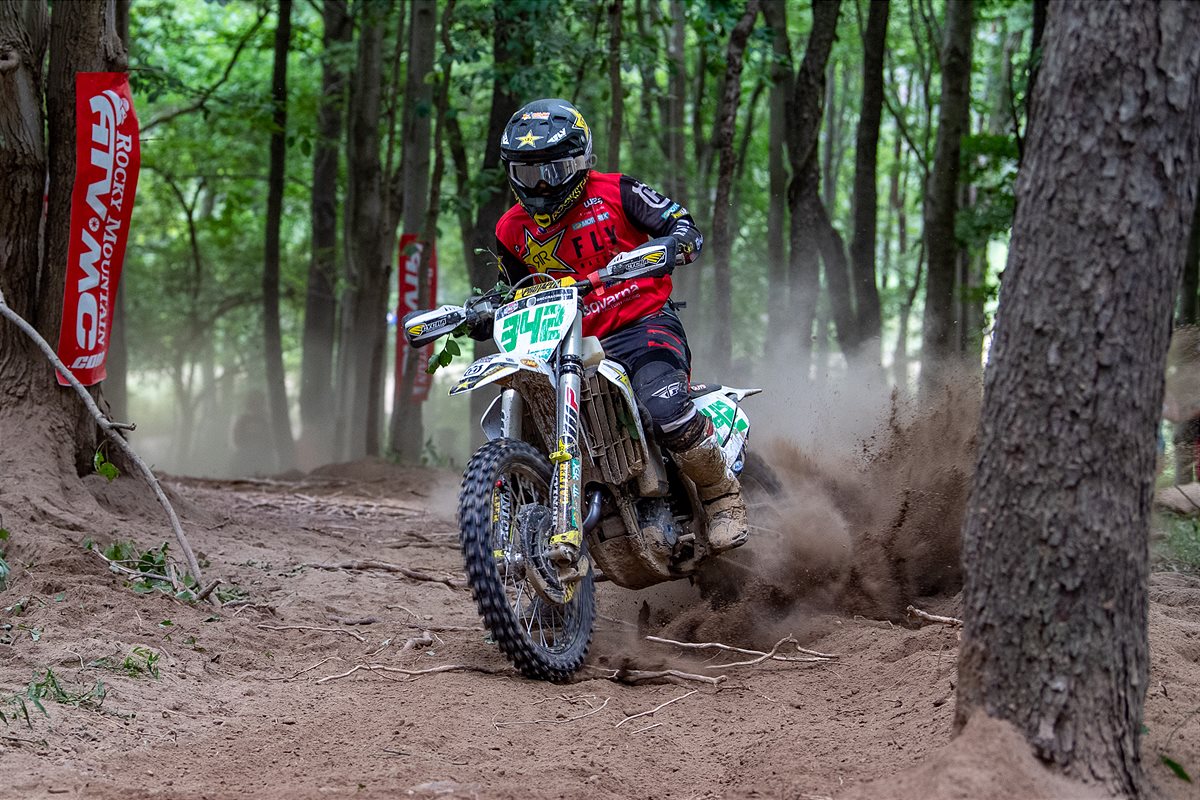 Rockstar Energy Husqvarna Factory Racing Team’s Craig DeLong continues to lead the way in the XC2 250 Pro championship standings following another second-place podium finish at Round 8 of the Grand National Cross Country (GNCC) Series in Maidsville, West Virginia.
DeLong, who remains the only XC2 rider to finish on the podium at all eight rounds thus far, got off to a mid-pack start and he fought through the dust to reach second-place by lap three. He put on a mid-race charge to catch the leader and he made his move into the lead on lap four thanks to an off-lap pit strategy. From there, it was a game of cat and mouse as DeLong dropped back into second before making another big charge late in the race. After reeling him in on the final lap, DeLong was looking to set up another pass until a big crash sent him to the ground about halfway through the lap. Fortunately, he was able to re-mount quick enough to salvage second-place on the day and he heads into the summer break with a nine-point lead in the class.
“I actually ran Johnny [Girroir] down and got around him on lap four but I just made too many mistakes and he got back around me,” DeLong said. “I ran him back down on the last lap and got up to his rear tire but I had a big crash and hurt my shoulder pretty good. Overall, it was a good points day and I’m happy to be healthy and in one piece.”
XC1 OPEN PRO
Coming off a big victory at the recent AMA Supercross Championship finale, motocross star Zach Osborne made an off-road appearance on Sunday at the High Voltage GNCC. Osborne didn’t get the most favorable start as he rounded the opening lap in 10th. He battled in 10th for the first two hours before passing his way into eighth on the white flag lap. Osborne dug deep to remain on the lead lap and it paid off as he picked up another spot on the final lap to ultimately finish seventh in the highly-competitive XC1 Open Pro class.
“I want to thank the entire Rockstar Energy Husqvarna Factory Racing Team for giving me the opportunity to come out here and do some racing,” Osborne said. “It wasn’t exactly the result any of us wanted but I will be back for more and I will be better.”
Next Event: Round 9 – The Mountaineer GNCC – September 13, 2020
High Voltage GNCC Results
XC1 Open Pro Class Results
1. Kailub Russell (KTM)
2. Josh Toth (KTM)
3. Josh Strang (KAW)
…
7. Zach Osborne – Rockstar Energy Factory Racing Team
XC2 250 Pro Class Results
1. Jonathan Girroir (KTM)
2. Craig DeLong – Rockstar Energy Factory Racing Team
3. Mike Witkowski (YAM)
XC2 250 Pro Championship Standings
1. Craig DeLong, Rockstar Energy Factory Racing Team – 203 points
2. Jonathan Girroir – 194 points
3. Mike Witkowski – 191 points
About Michael Le Pard 7928 Articles
"Mr. Totalmotorcycle". Owner and Founder of Total Motorcycle. Supporting over Motorcyclists and Motorcycling for 23 great years. Total Motorcycle is my pride and joy and being able to reach out 375 million people has been incredible but I could not have done it without the support of my visitors, readers and members, thank you so much! You are making a difference to millions of riders worldwide. Thank you.
Website Facebook Instagram Twitter YouTube LinkedIn

After a successful winter period, Monster Energy Yamaha Factory MXGP’s Romain Febvre and Jeremy Seewer, and Monster Energy Wilvo Yamaha MXGP’s Arnaud Tonus and Gautier Paulin are set for the opening round of the MXGP […]

Team Suzuki Press Office – August 18. The Bennetts Suzuki team is in Lincolnshire for this weekend’s Party in the Park and round eight of the MCE British Superbike Championship at Cadwell Park. After a […]

AMA National Hare & Hound – Round 3 Murphy, ID Another strong showing in the desert for the Beta Race Team. Each rider on the team earned a podium in their class once again. Zane […]