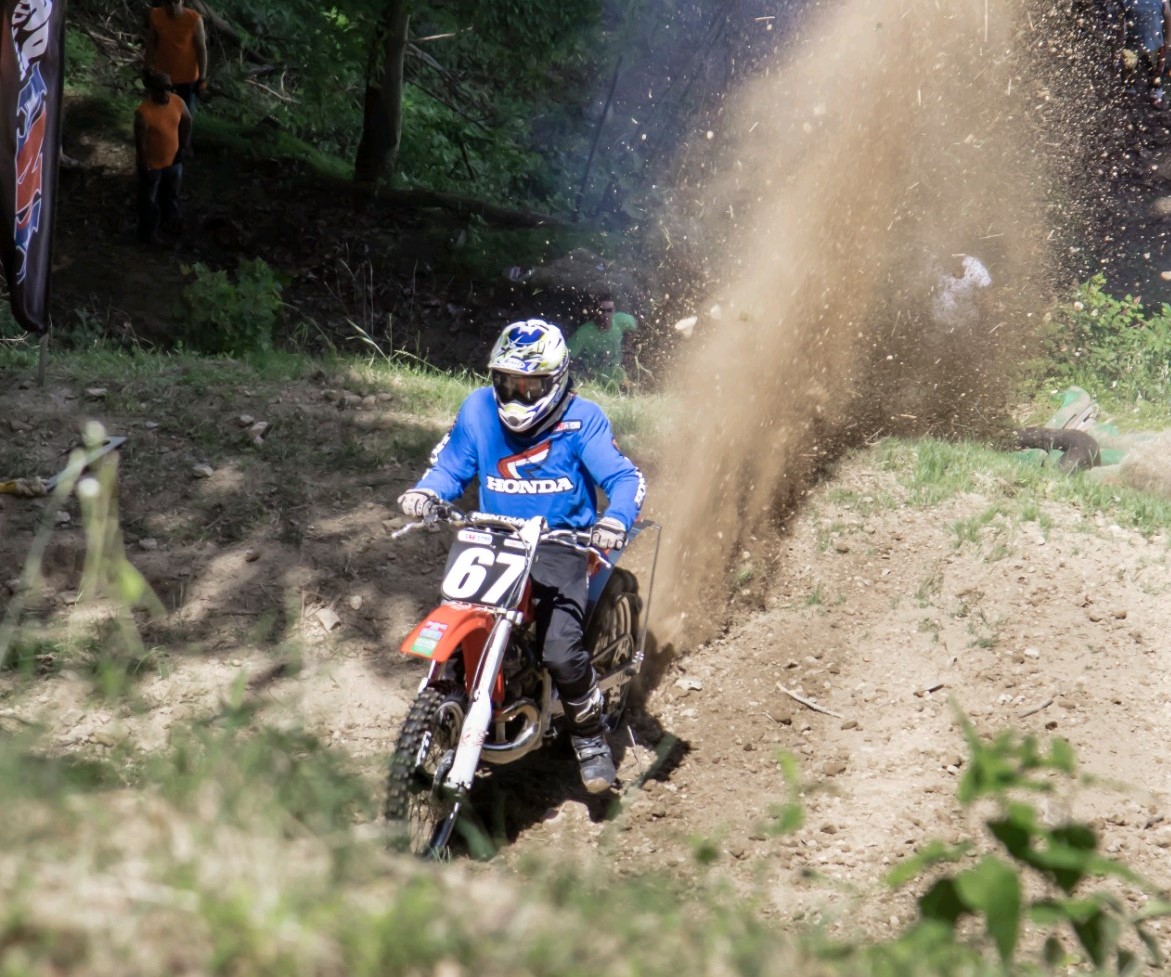 The first round of the 450 class kicked off at noon and it was obvious from the start that it was going to be a day of finesse and technicality as riders were clocking times in the double digits on the 500 ft. hill. Just four riders in, Logan Cipala set a fast time of 11.934 sec that seemed untouchable.

The last rider of the round, defending champion John Koester, came in just short of Cipala’s time with 12.040 sec.

Even though he had already clinched the fast time, even after his competitors all ran second rounds looking to out-run him, Cipala took a second trip up the hill as a test of his own limits. Astonishingly, he clocked a fast time of 11.756 sec, beating his own fast time of the day.

Round one of the Xtreme class started off a little rocky, until Sallstrom left the starting line and stopped the clock only 9.388 seconds later, beating the fastest 450 cc time by over two seconds.

The round ended with Sallstrom on top with is first win of the season at 9.388 sec, Libhart finishing second and Koester in third with 9.923 sec.

The Unlimited Class began with Sallstrom who started the class off strong with a time of 11.662 sec. Fourth-rider Koester snapped what looked like the fastest hole shot of the day, but his 800 cc Honda on 100% nitro got away from him at the 275 foot mark. Cipala, who made history with a stellar performance in the last round, again delivered and set a new fast time of 10.606 sec.

The last rider of the round, Trey Hagstrom, whose aggressive riding style hasn’t been seen on the series since 7 Time AMA National Champion Dave Watson, took off but never made it through the timing lights with a clutch problem, but after a second running of all riders, delivered a time of 10.647 sec., earning him his first AMA Pro Hillclimb podium position.

A tradition during Laconia Motorcycle Week, it was standing room only for Round 4 of the AMA Pro Hillclimb Series at Gunstock Mountain Resort.

The Bike Week ambiance of the Gunstock Hillclimb always delivers unique racing, crowds and cameo competitors. In the area for the American Flat Track Laconia Short Track event, professional flat track racer Ryan Wells made his Hillclimb debut – finishing tenth place in the Unlimited Class. In addition, Devin Sweitzer, a hard-charging veteran of the sport, made the All Star Challenge for the first time in his career and took home his best finishes in both the Xtreme and Unlimited classes.

The first few riders in the 450 Class turned in sub-10 sec times, impressing crowds until rookie rider Matt Walker clocked a run of 7.730 sec. to gain the fast time of the day. Not to be bested was veteran John Flyin Koester who subsequently stopped the clock at 7.434 sec.

It wasn’t until Logan Cipala mounted his machine that Koester’s time would be bested – 7.329 sec. for Cipala.

As the 450 class ended, and even though Cipala had clinched the win, he took his second attempt at the hill. He delivered a fan-pleasing run to beat his original time: 7.083 sec.

The podium shaped up with Cipala on top with his third win for the season, Jay Sallstrom in P2 with a time of 7.396 sec. and Koester in third finishing in 7.434 sec. Cipala has a pretty firm grip on the championship points at our halfway mark of the season – ten points ahead Koester.

In the Xtreme class Jack Mason, determined to make up some championship points lost due to mechanical issues in an early round, clocked a formidable 7.247 sec. run. Deryk Beadoin, 2018 AMA Rising Star winner, made his first appearance for the season and set the new fast time of 7.197 sec.

Mason’s second run set a new standard as he shattered the seven second mark with a time of 6.769 sec.

Sallstrom, whose first run delivered no eligible time, made his second count with a staggering run of 6.123 sec, besting Mason by over half a second.

The round ended with Sallstrom’s second win of the season with Mason and Koester rounding out the top three.

For the Unlimited class, Koester, who looked to deliver a stronger performance after two P3 finishes, stopped the clock at an incredible time of 6.680 sec. The time looked unbeatable as the hill started to deteriorate for the next several riders.

Phil Libhart, finding a ridable line around the loose stuff, just nearly bested Koester by 0.022 seconds, clocking a time of 6.658.

After a second run, Koester’s hunger for a win paid off with an untouchable time of 6.540 seconds. The remaining competitors attempted to top this run, but to no avail.

At the end of the round it was Koester, Libhard and Cipala on top of the box. After impressive performances in the class, Cipala and Koester are tied as leaders in the points standings.

The AMA Pro Hillclimb Series will be back for the second half of its season for Round 5 at Spring Creek MX Park in Millville, M.N. on September 15, 2019.

About AMA Pro Racing:
AMA Pro Racing is the premier professional motorcycle racing organization in North America, operating a full schedule of events and championships for a variety of motorcycle disciplines.

Following the success of the 2017 bLU cRU Masterclass, Yamaha Motor Europe is pleased to announce that 15-year-old Jörgen-Matthias Talviku has been carefully selected as the winner of the 2017 YZ125 bLU cRU Cup. As […]

Varese, December 16th 2019 – MV Agusta will be recognised as one of Lombardy’s Design Excellences during a ceremony to be held in Milan at Palazzo Pirelli on December 17th, 2019.  The award’s jury was […]

With the start of the 2019 Bennetts British Superbike Championship just around the corner at Silverstone on 19-21 April, Honda is pleased to welcome Bikers Care Approved as the latest sponsor to join the team. […]