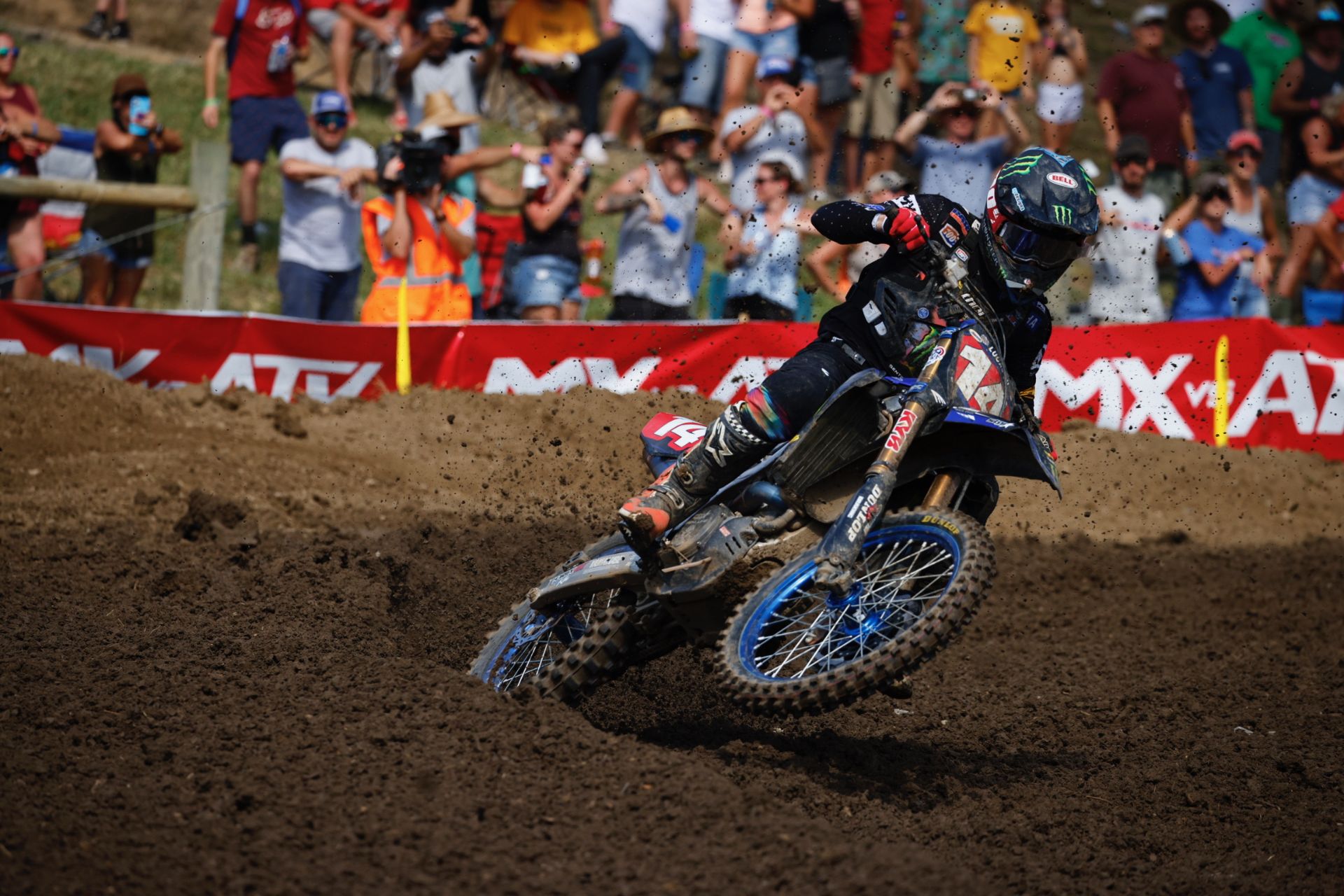 Monster Energy Star Yamaha Racing’s Dylan Ferrandis returned to the podium with a runner-up finish at yesterday’s Ironman National in Crawfordsville, Indiana. The Frenchman’s 1-2 result helped strengthen his position in the Lucas Oil Pro Motocross 450MX Championship, giving him a 50-point lead with two rounds remaining. Still not feeling 100% after his big crash at Unadilla, teammate Aaron Plessinger toughed it out in the challenging conditions and finished 13th overall despite withdrawing from Moto 2.

Ferrandis set the pace straight away, topping both qualifying sessions to earn the fastest qualifier honors in the premier class. He got a good launch off of the gate and took the number-one spot before the start of Lap 2. Although he was passed shortly after, he reclaimed the lead at the end of the lap. He tried to build a gap, but it was a heated three-rider battle up front. He held up to the pressure, and as the clock was winding down, he started to pull away, ultimately crossing the line with a four-second lead for his sixth moto win of the season.

In Moto 2, Ferrandis grabbed the holeshot, but he was shuffled to third early in the race. The Frenchman put his head down and once again made the pass before the start of Lap 6. From there, he managed a smart race in the challenging conditions to keep his podium streak rolling with a second-place finish for second overall.

Plessinger didn’t get the start he was hoping for in the first moto and found himself 14th after the first lap. He quickly went to work and advanced to seventh four laps into the moto and then up sixth with four laps to go, where he ultimately finished. The Ohio Native had a better start in Moto 2 in sixth. On that opening lap, he was shuffled to seventh, but he fought back to reclaim the position on the following lap. As the race wore on, he started to lose some ground and was ninth on Lap 6. He tried to keep pushing at what he considers his home race, but unfortunately, the punishing conditions had him withdrawing from the race after the halfway mark.

The Monster Energy Star Yamaha Racing team heads back west to Pala, California, for the penultimate round of the Lucas Oil Pro Motocross Championship on September 4 at Fox Raceway.

“Today was another great day for the team. On a very hot day, Dylan was able to gain another 11 points and opened up his lead to 50 points which is amazing. Aaron gave it another go and had a great first moto, but unfortunately, his body is just not there yet and he was not able to finish the second moto. We will regroup once again and be ready for Pala.”

“Today was a hard day, and I didn’t have the power to push deep. It was just gnarly physically, so to get that first moto win was awesome. Then in the second moto, I said it’s time to get the holeshot, and I did, but Eli (Tomac) was on it today, so congrats to him, he deserved this win. Second overall was a good result for today and good for the championship. The bike was awesome all day; we didn’t touch anything, which was great.”

“It was another rough one for me. I felt good most of the day, and the bike was working awesome. The track wasn’t the best, and I was a little disappointed when it wasn’t too deep. This place usually ruts up really well with multiple lines to pass, but this time it was like a highway with sawdust on it. I finished Moto 1 in sixth, so that was better than last weekend, but I was still hurting going out for the second one, and my body just wasn’t ready for it, I guess. The plan is to recover this week and hopefully be back at Pala next weekend.”

Team Suzuki Press Office – August 12. The Austrian Grand Prix awaits Team Suzuki Ecstar this weekend, August 14-16th, for the fourth instalment of the Championship in the top class, the first of a double-header […]

TOP-5 FOR DECOTIS AND SUZUKI AT HOUSTON SX

April 2, 2019 Michael Le Pard News Comments Off on TOP-5 FOR DECOTIS AND SUZUKI AT HOUSTON SX

Rockstar Energy Husqvarna Factory Racing’s Colton Haaker raced his way to a podium finish at Sunday’s RevLimiter Extreme Enduro, which also served as Round 2 of the 2021 AMA West Extreme Championship in Bridgeport, Texas. […]