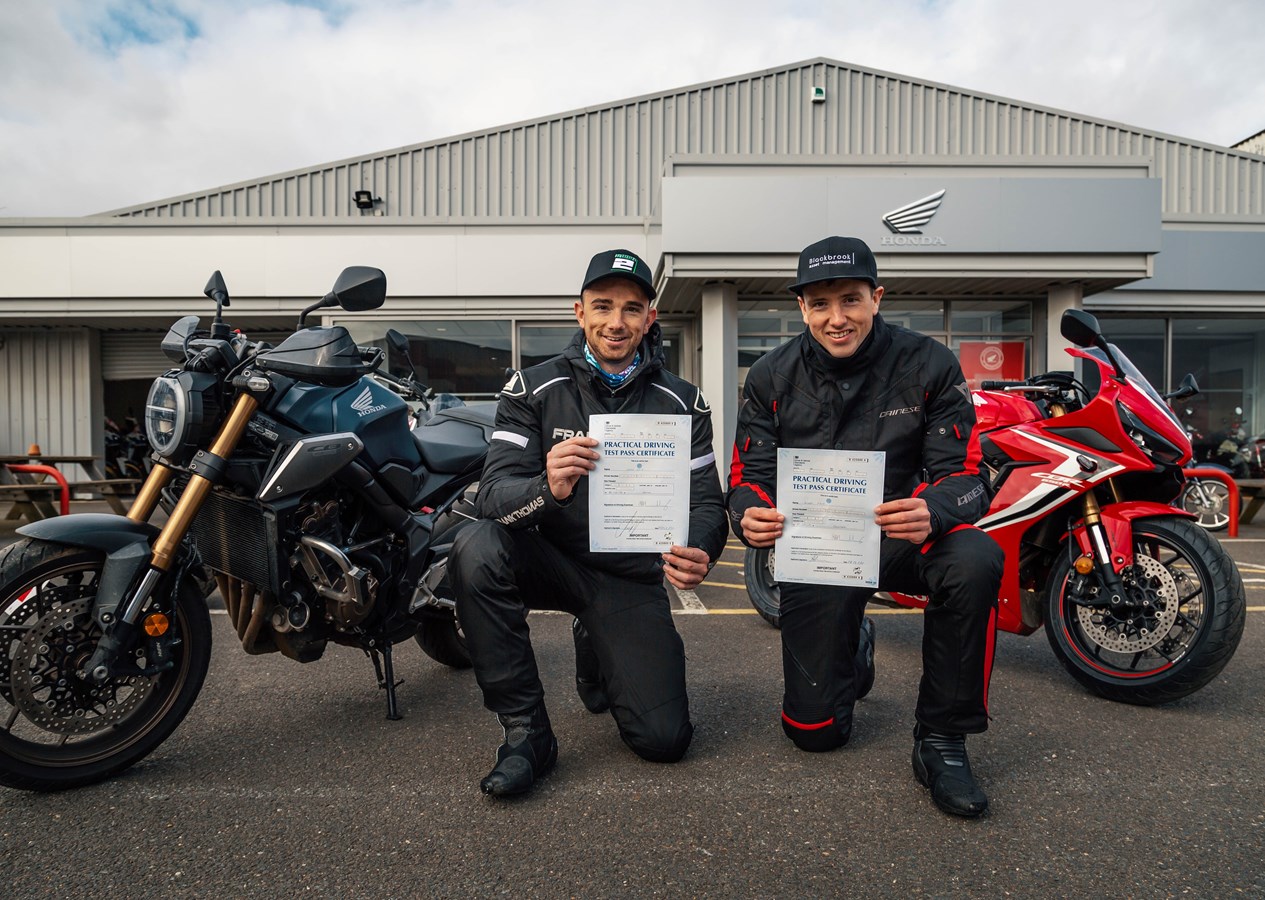 Honda’s brotherly duo Andrew and Glenn Irwin, swapped circuits for the roads during the off-season to successfully pass their motorcycle tests, using a Honda CB650R and CBR650R.

Embarking on a fast-track course, the brothers had an extensive few days of training before both passing the module one and module two assessments, thanks to Grantham Honda and Alpha Training/Honda School of Motorcycling and can now remove their L-plates as Spring arrives.

Andrew Irwin:
Passing the road bike test is something I’ve always wanted to do, and the older I got the more I wanted to do it, and with Glenn doing the TT I thought it would be nice to be able to get out and watch from different places around the course. As well as getting from A-B without relying on lifts! The test procedure was different to what I thought it was going to be, but the training, and the guys at Grantham Honda and Alpha Training were great and it was a relief to pass! There’s a bit of pressure when you’re a Superbike rider and haven’t got your bike licence, so to do it and possibly fail there’s even more pressure! But it was good to pass and get it done, I’m looking forward to getting out and riding now. Thanks to Honda UK for putting us through the tests!

Glenn Irwin:
I can’t thank the guys at Alpha Training enough for the week’s training, we had a great time and it was good to finally get the test done – it’s something I had always wanted to do, but something I never got round to doing. Ade our instructor was excellent and helped us so much and showed us some of the bad traits we’ve picked up from racing. Thanks to his training the test was almost a little easier than the lessons in some respects as he was hard on us in training, to make sure everything was just right and it worked as myself and Andrew passed and also the two other lads in the group with us. I always have sponsors asking me to go for a ride and now rather than saying no, I can finally say yes and start to explore the roads where we live and enjoy riding in a different way. A big thanks to everyone at Honda UK, Grantham Honda and Alpha Training – we had a great week!

The Honda pairing will now be able to ride the all-new CBR1000RR-R Fireblade SP on the road, as well as competing in the British Superbike Championship, and Glenn at the North West 200 and the Isle of Man TT races.

Isle of Man newcomer Glenn has used the experience as an extension to his TT training helping to learning the course, as well as being able to travel easily to and from the paddock during the races.

The brothers will be back in action in the British Superbike Championship next month, as Round 1 takes place at Silverstone on 10/11/12 April.

The Honda School of Motorcycling offers a full range of courses from Compulsory Bike Training through to full licence courses, so no matter where you are in your riding career, it has a course that is right for you.

The tailored training courses cater to riders of all abilities and are delivered by approved Honda instructors. All Honda School of Motorcycling courses include insurance, bike hire and protective clothing at no extra cost.

Over 50 Honda School of Motorcycling branches are located nationwide.

Sweltering weather conditions greeted the World Superbike contenders today at the Misano World Circuit, where the seventh round of the championship is being held and where the two Aruba.it Racing – Ducati riders, Álvaro Bautista […]