After a tough start to the Imola WorldSBK round, the Red Bull Honda World Superbike Team are confident that there are improvements to be had over the rest of the race weekend as Jake Gagne and Jason O’Halloran continue their familiarisation at the technical Autodromo Enzo e Dino Ferrari.

In his first ever outing at the challenging Imola circuit, Gagne was able to improve his lap time throughout the first two sessions of the day, but a crash at turn 12 at the start of Free Practice 3 meant that the American rider was unable to further improve his position in the final session. Gagne finished the day in P17 overall with a personal best lap time of 1’49.024, 2.3 seconds off the benchmark time of the day.

Stll recovering from broken ribs sustained in the Aragon round last month, Leon Camier bravely went out on track in Free Practice 1 and 2 to assess his physical condition on his return to track action and although able to set a competitive time over a single lap, his current physical condition meant completing the full race distance of 23 laps of the Imola circuit wasn’t feasible. As a result, it was decided to withdraw Camier from the remainder of the race weekend with his place filled by reserve rider Jason O’Halloran. The Australian rider got up to speed quickly in FP3 on the WorldSBK-spec CBR1000RR Fireblade SP2 and he ended the day in 21st position overall with a best lap time of 1’50.259.

Today’s result means that both Gagne and O’Halloran will take place in the Superpole 1 Qualifying session tomorrow at 1030 local time (GMT +2) with the top two riders from that session graduating to Superpole 2. Race 1 will start at 1300 local time.

I was looking forward to riding today to see how I would feel on the bike as my recovery has gone quite well to this point. In the first session I was cautious to start with and although I was still in a lot of pain, I was still able to find a way to set a decent lap time although it was clear that I was still feeling the effects of my injury. However ,I thought I’d give it another go in Free Practice 2 with the purpose of seeing how I went over a longer run and it quickly become apparent after doing eight laps in a row that completing a race distance here at Imola this weekend just wasn’t possible. It was a tough decision to withdraw from the weekend but definitely the right one to make and I’ll now focus on trying to be ready for my home race at Donington in a couple of weeks time.

Imola is a really fun circuit with lots of different types of corners and elevation changes – its unlike any track I’ve ever ridden before. We made some good progress in the first two sessions of the day and changed some settings on the bike and each time I felt better when I headed out. I was looking forward to improving again in FP3 but unfortunately on my first flying lap I had a crash which was a shame as the bike felt really good and I’m sure I could’ve made another step. The good news is I didn’t hurt myself in the crash and I’m looking forward to getting back out there in FP4 and Superpole and hoping I can challenge for some points in Race 1. 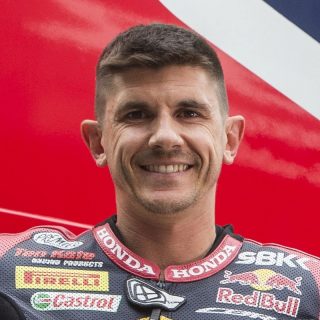 It was definitely a challenging way to enter a world championship weekend starting off in Free Practice 3 at a circuit I’ve never ridden a Superbike at and with a new team, but thankfully the team has been great and my initial feeling with the WorldSBK-spec Fireblade was really good. We stuck to using the one set of tyres for the whole session and didn’t make any setting changes – the bike was still set up for Leon – just so I could get used to everything, but I was able to steadily improve throughout the session and set my fastest lap on my very last lap. I can now sleep on what I learned today and tomorrow we can set the bike up more for me, so I’m confident we’ll be able to improve things tomorrow. My goal is just to keep progressing every time I get out on the bike.

The day started with Leon and Jake both riding, for Leon we knew it would be really tough for him as it’s only been a month since his crash at Aragon but he was quite brave to ride in the first two sessions, but in the end doing a race distance here at Imola isn’t possible for Leon, so we decided to not risk anything and instead look ahead to Donington which is his home race. Leon’s place was taken by Jason for FP3 and he had a good solid start, using only one set of tyres for the whole session and could set a respectable lap time so he’s doing a good job for us. Jake had a really good start to the day at a track he’s never ridden before, he continued to drop his lap time in the first two sessions but unfortunately had a crash at the start of FP3 which stopped his momentum. We have a few things to try for tomorrow for both riders; we’ll just keep pushing and I am confident we can do better tomorrow after a difficult first day.

242
Friday 11 May 2018, 16:39 UTC
About Michael Le Pard 3850 Articles
"Mr. Totalmotorcycle". Owner and Founder of Total Motorcycle. Supporting over Motorcyclists and Motorcycling for 21 great years. Total Motorcycle is my pride and joy and being able to reach out 330 million people has been incredible but I could not have done it without the support of my visitors, readers and members, thank you so much! You are making a difference to millions of riders worldwide. Thank you.
Website Facebook Instagram Twitter YouTube LinkedIn

With the 2019 FIM Cross-Country Rallies World Championship kicking off in the United Arab Emirates from March 30 to April 4, Rockstar Energy Husqvarna Factory Racing’s Andrew Short is all-set to take on the five-stage […]