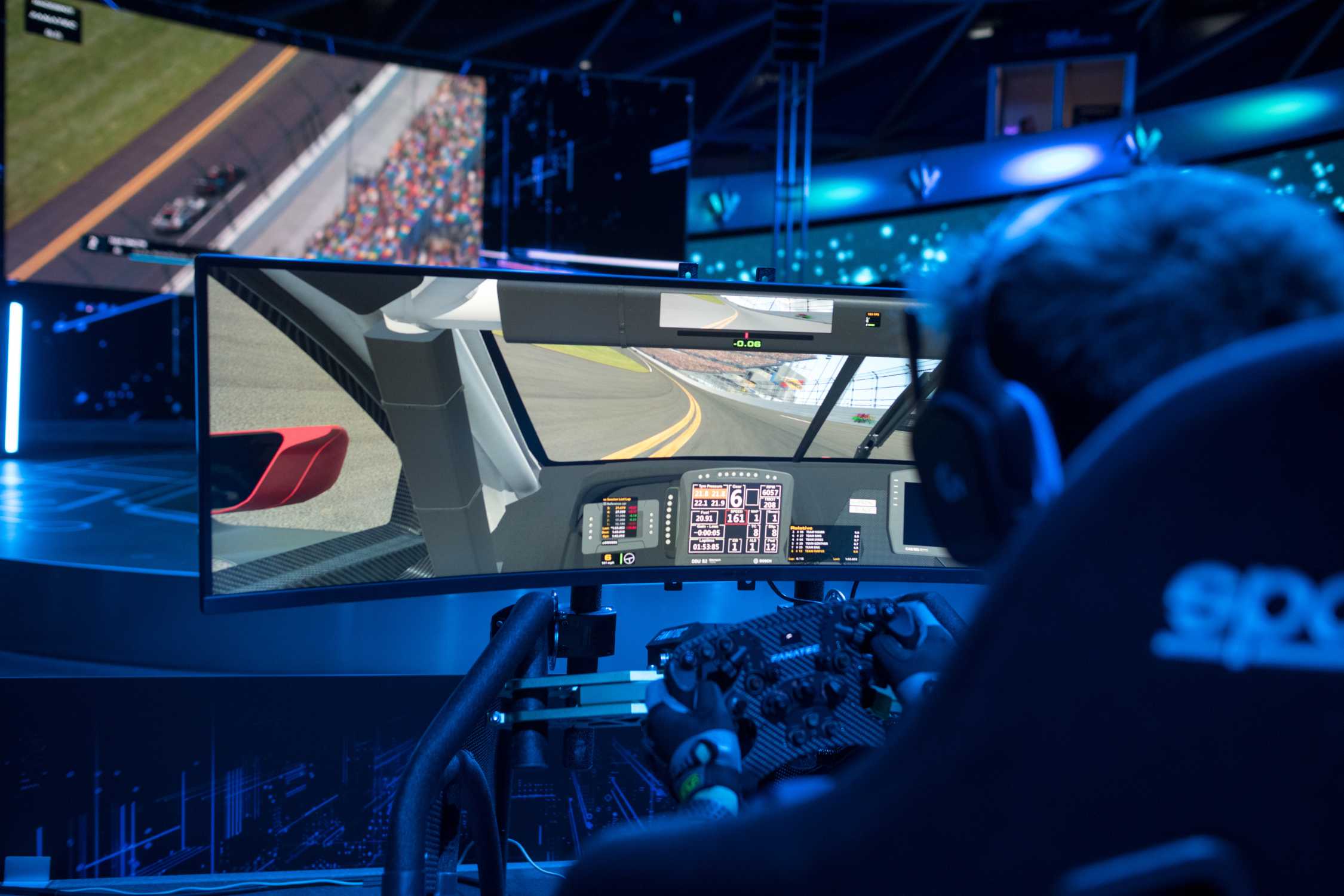 Munich. Just as a real racing driver needs a customised cockpit to be successful, the right hardware is also required in sim racing if you want to compete at the highest level. The range on offer is huge – from simple basic equipment, which any amateur gamer can pick up, to high-end solutions. BMW drivers Philipp Eng (AUT) and Christian Krognes (NOR), and sim racers Laurin Heinrich and Alexander Voß (both GER) give an overview of what is on offer and reveal that the most expensive equipment does not necessarily guarantee the fastest lap times.

Sim rig, force feedback, direct drive and widescreen are meaningful terms to those heavily involved in sim racing. They are just some of the hardware components that can be used in virtual races at the highest level of the discipline. Essentially, a high-end kit consists of a solid and stable metal frame, in which the racing seat is integrated – the so-called sim rig. As a rule, a rig like this also includes a screen – preferably a high-resolution one. A steering wheel with appropriate engine and a set of pedals are also obligatory.

This kind of equipment is currently allowing the likes of BMW works driver Philipp Eng to regularly take to the track in virtual BMW race cars, like the BMW M8 GTE in the IMSA iRacing Pro Series and the BMW Z4 GT3 in the Digital Nürburgring Endurance Series powered by VCO with great success. Just a few weeks ago he won the iRacing 24h Nürburgring powered by VCO – the biggest success of his sim racing career so far.

That career began at the age of 17, when he modified a racing simulator on his desk at home. “I shifted the schoolbooks to one side, clamped my steering wheel to the desk, fixed the pedals to the floor – and I was ready,” Eng recalled. Nowadays, his requirements are a little more sophisticated. “In my opinion, a stable rig that does not wobble is important. I also attach great importance to ensuring that the seat position is as close as possible to what it would be in a real race car,” said Eng. “However, the most important thing for me is a good steering wheel motor. In a static simulator, the steering wheel is the only connection I have with the track. Only through the force feedback am I able to feel how the car moves – not through my whole body, as I can in reality. Another thing that helps is the so-called direct drive, with which the virtual steering column leads directly into the engine, just like in a real race car. That results in the steering wheel reacting far more directly.”

Voß: “It is worth spending more than half your budget on a good rig and good pedals”.

Top sim racers Laurin Heinrich and Alexander Voß from the BS+COMPETITION team, who won the virtual 24-hour race on the Nordschleife alongside Eng, are real experts when it comes to equipment. On the topic of hardware, Voß said: “In my opinion, it is worth spending more than half your budget on a good rig and good pedals if you are looking to get top equipment.” His direct drive steering wheel is homemade, as that technology was not for sale when he received it seven years ago. Heinrich went a slightly different way in this regard. “I don’t have a homemade steering wheel. Instead, I recently bought a new direct drive model. I use a DTM-style steering wheel, because I am most comfortable with that.”

Like Eng, both sim racers have a 49-inch widescreen monitor with 144 hertz. “A monitor with a fast reaction time is extremely valuable, as it gives you a very realistic feeling of speed and is easier on your eyes,” Heinrich explained. Eng added: “The image transmission rate is hugely important for me to immediately see on the screen the movements that I can feel on the steering wheel without any delay.” Eng does not feel that the system often seen on the sim racing scene, with three screens to allow a larger field of vision, particularly laterally, is necessarily essential. “After all, I don’t look through the side window in a real race car.”

What equipment do you need, to be able to compete with the best?

The big question regarding hardware for sim racing is: What equipment do I need, to be able to compete with the best? Do I really need to fork out a five-figure sum for the race simulator and all the accessories?

One man currently showing that this is not necessarily the case is Walkenhorst Motorsport driver Christian Krognes. He has only been heavily involved in sim racing for a few weeks and drives a BMW Z4 GT3 in the DNLS powered by VCO. Although his equipment is more of a throwback to what Eng was using when he started out aged 17, Krognes is setting impressive lap times on the virtual Nordschleife and challenging at the front of the field. “I basically sit at a normal table, on a normal chair. During the day, I work from home as usual. Then, in the evening, I fasten my steering wheel in place and drive for a few hours,” Krognes explained. His pedals are attached to a box under the table and there is no sign of a metal sim rig holding the whole construction together. That does cause the odd issue. “If I brake too hard, I sometimes slide backwards on my stool,” said Krognes. He is now considering making himself a simple rig.

At what point does high-end equipment make sense?

How is it possible for Krognes, despite his relatively basic equipment, to keep pace in such a strong racing series as the DNLS powered by VCO? “More expensive does not necessarily mean faster,” said Eng. “There are also a lot of professional sim racers who do not have such high-quality equipment, but still show me how it is done.” Voß agreed: “You are not automatically half a second faster, just because you have invested several thousands of euros in a good simulator. You have to get used to everything – even very basic equipment. Familiarity plays a very big role. Only when it comes to squeezing out the final few tenths of a second do I think that it is easier with good equipment. In my opinion, you can perform more consistently with good pedals and a good steering wheel, in particular. It is more intuitive.” Krognes backed him up: “I don’t think I would be significantly faster with top-quality equipment, but I would probably be more consistent. A triple stint in an endurance race can be pretty uncomfortable on a normal chair.”

The good news for amateur racers is that you can get hold of hardware to be competitive in sim racing, with a manageable budget. Only if you are spending many hours a day at the wheel, or need to find the final few tenths of a second at the very highest level, does it make sense to invest in high-end equipment. Eng, Heinrich and Voß will be doing just that when back in action at the virtual Nürburgring this Sunday. This time, however, they will not be on the Nordschleife but the Grand Prix Circuit. At the wheel of the BMW M8 GTE, they will take on some of the best sim racers in the world in the BMW SIM 120 Cup. Voß and Heinrich will form one team, while Eng will drive alongside fellow BMW works driver Bruno Spengler (CAN)

Danilo Petrucci will start from the third row of the grid in the Grand Prix of Emilia Romagna and the Rimini Riviera scheduled tomorrow at Misano World Circuit “Marco Simoncelli”.After having finished Friday’s free practice […]

Yamaha Motor Europe is delighted to confirm that the special ‘Piro’ Replica R1, created in honour of the late Fabrizio Pirovano for the FIM Superbike World Championship’s return to Estoril, 27 years after his 10th […]