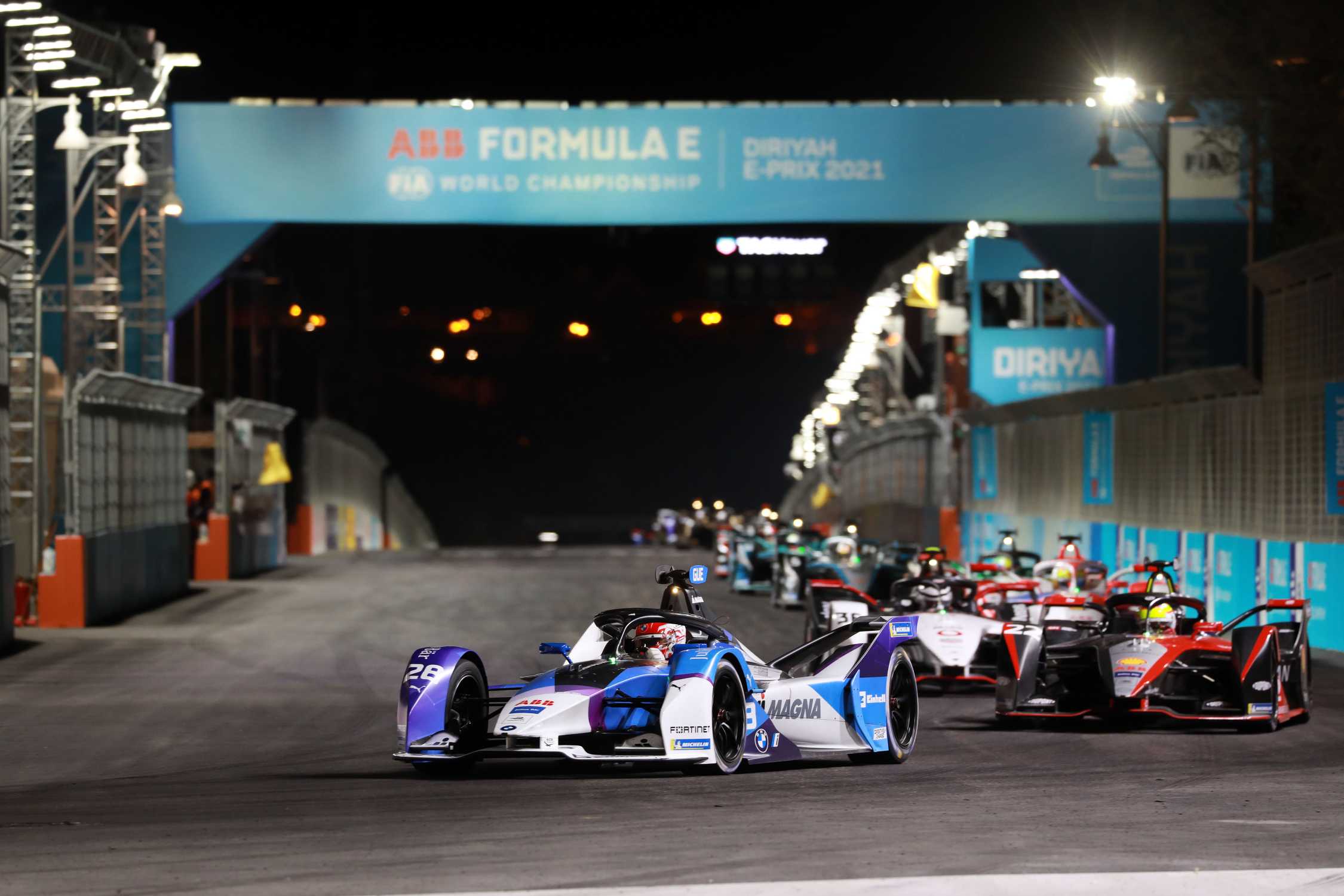 Diriyah. BMW i Andretti Motorsport drivers Maximilian Günther (GER) and Jake Dennis (GBR) have missed out on the points in the opening race of Season 7 in the ABB FIA Formula E World Championship in Diriyah (KSA). Günther reached sixth position in the first night race in the history of Formula E and was in with a good chance of mounting an attack on the podium but was forced to retire after sliding into crash barriers around ten minutes before the finish. Dennis gave a solid performance on his Formula E debut, crossing the line in twelfth place. The second race of the season will take place on Saturday.

Günther began the race from ninth on the grid, moving up two places at the start. He then concentrated on driving efficiently, conserving his two ATTACK MODES for the closing stage of the race. After a yellow-flag period saw the BMW i8 Roadster Safety Car at the head of the field, he pushed on and attempted to pull away from the cars behind, only to slide into crash barriers when he lost the racing line. His BMW iFE.21 was too badly damaged to continue the race. Dennis started his first Formula E race from 14th place, gave a consistent performance and managed largely to steer clear of the tough midfield battles. He crossed the finish line in twelfth position. Victory went to Nyck de Vries (NED, Mercedes).

Reactions to race 1 in Diriyah:

“Obviously, that was not the race we hoped for. It’s a disappointing start to the season. Maximilian sat in a pretty comfortable sixth position but then lost the car. The left side is damaged but the guys will look at it now and get it fixed for tomorrow. Jake learned a lot today. He had a conservative start, but especially in the second half of the race he showed strong pace. He will sleep on everything he experienced today and will come back stronger tomorrow. So will the whole team. We will analyse what happened today, improve certain things and come back fighting in tomorrow’s event.”

“I had a good start into the race. I gained two positions immediately. For the majority of the race I was in P6 taking care of energy management so I was in a really good position for the final laps of the race to score good points. Then I unfortunately touched the wall in turn 2, crashed into the barriers and damaged the car. I’m really sorry about that for the team. Anyway, all in all I am pretty satisfied with our race pace. Now we have to move on and concentrate on tomorrow.”

“There was a lot to learn in my first Formula E race, but all in all it wasn’t too bad. I kept out of trouble and made up a few positions. For me it basically was a day of learning. Tomorrow will hopefully be better. I’ll start in qualifying group two, which will be another challenge for me.”

May 20, 2020 Michael Le Pard News Comments Off on Sim racing vs Real Motor Racing the BMW Engineer Becomes the Student

Munich. During his time as a racing driver, Jeroen den Boer (NED) used to drive BMW Motorsport GT3 cars. As head engineer, he now looks after the race outings of the BMW M6 GT3 and […]

Munich. Within a challenging market environment, the BMW Group has started the financial year 2019 in line with expectations in operational terms. Contrary to the prevailing trend in the sector, the Group’s attractive and significantly younger […]