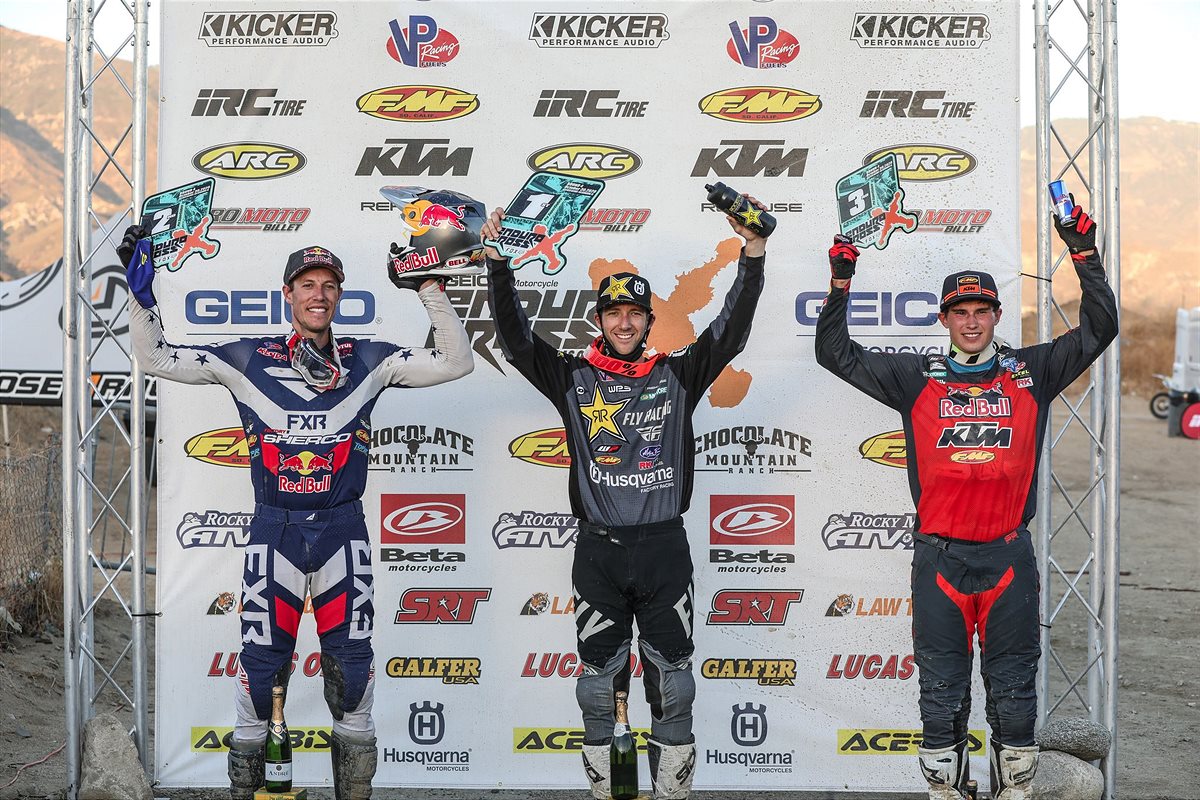 Rockstar Energy Husqvarna Factory Racing’s Colton Haaker extended his points lead in the 2020 AMA EnduroCross Championship with a clutch victory on Friday at Round 4 of the condensed six-race series at Glen Helen Raceway. Following a bit of bad luck at last night’s previous round, the three-time AMA EnduroCross Champion bounced back with vengeance to conclude another solid double-header weekend with 3-1-1 finishes and his third overall-win in the first four rounds.
In race one, Haaker got off to a second-place start aboard his Husqvarna FX350 and he worked his way into the lead by lap four. He led the way for two laps before making a bobble exiting the rocks, which ultimately cost him the lead with two laps to go. With second-place nearly locked up on the final lap, Haaker made another mistake on the K rail and dropped to third, where he secured a podium finish in the first race of the night.
In race two, Haaker got off to a decent start from the second row but he got stuck in a pileup in the rock section early on and was forced to start out nearly dead last on the opening lap. He quickly made passes and overtook the lead on lap two, where he focused on pulling away from the rest of the field. A small bobble from Haaker allowed the second-place rider to catch up but the points leader was able to power through the remainder of the race to claim victory by 1.4 seconds.
In race three, Haaker powered his way to a second-place start and he quickly moved into the lead on the opening lap. He set the early pace out front before engaging in a head-to-head battle with Cody Webb, where they diced back-and-forth for the top position. Haaker reclaimed the lead by the next lap and he held strong to carry it through the checkers to finish 3.2 seconds ahead of Webb in the final race of the night.
“Each of my three wins has come with its own set of challenges and tonight was no different,” Haaker said. “I had a mistake in the first moto that cost me the win and put me behind the eight ball but I managed to turn it around in the next two races. I’ve been dealing with a back injury since Round 2 that has gotten progressively worse with each round due to a lack of a break in the schedule, but we’re getting through it and making the most of the moments that count. Two more to go and I’m excited to close this thing out with a stamp on the season!”
Haaker and the rest of the field will take one-week off from racing before returning to Glen Helen Raceway on Friday, November 6 for the penultimate round of the 2020 AMA EnduroCross Series at Glen Helen Raceway.
Super Pro Class Results – Round 4
1. Colton Haaker, 3-1-1, Rockstar Energy Husqvarna Factory Racing
2. Cody Webb, 2-2-2, Sherco
3. Trystan Hart, 1-3-3, KTM
…
7. Noah Kepple, 8-10-7, Husqvarna
Super Pro Class Championship Standings
1. Colton Haaker, 97 points
2. Trystan Hart, 85 points
3. Cody Webb, 84 points
…
6. Noah Kepple, 57 points
About Michael Le Pard 7738 Articles
"Mr. Totalmotorcycle". Owner and Founder of Total Motorcycle. Supporting over Motorcyclists and Motorcycling for 23 great years. Total Motorcycle is my pride and joy and being able to reach out 375 million people has been incredible but I could not have done it without the support of my visitors, readers and members, thank you so much! You are making a difference to millions of riders worldwide. Thank you.
Website Facebook Instagram Twitter YouTube LinkedIn

Getting his participation in round four of the FIM Cross-Country Rallies World Championship off to the best possible start, Adrien Van Beveren has posted the fastest time in the opening Prologue at Argentina’s Desafio […]