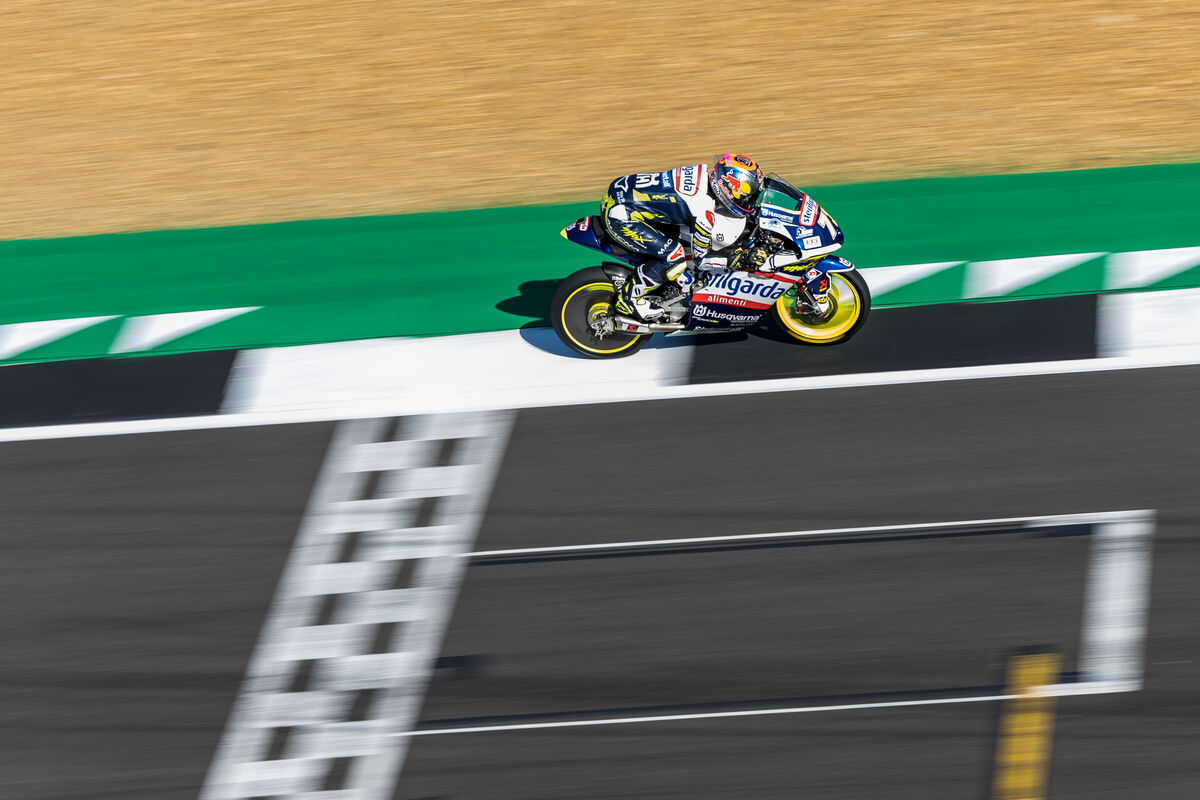 Silverstone, quick, long, flat and with a mix of flowing and elongated corners, benefitted from surprisingly good and stable British climate for the twelfth fixture of an intense Grand Prix season.
Ayumu Sasaki was buoyant to get back into action after his success the previous month but his eagerness was matched by teammate John McPhee who carried sizeable hopes for his home Grand Prix. The pair were among the fastest during Free Practice and carried the momentum into Q2 where they were able to take 8th and 9th positions on the start grid for the 17-lap race Sunday morning.
The FR 250 GP motorcycles were in the heart of a terrific, intense and large squabble for the podium that numbered up to 21 riders. The race was hectic with Sasaki and McPhee swapping positions within the top ten repeatedly and with nobody able to breakaway or create an advantage. With three laps to go Sasaki lost control going into Village corner and crashed. McPhee reached as high as third but in the dash to the finish line – when less than one second separated the first eight racers – he was bumped to 7th spot; equalling the Scot’s second-best result of the season.
Sasaki still maintains his total of 113 points and has slipped to 6th in the standings. He trails 1st place in the Moto3 championship table by 69 points. McPhee has pushed up to 16th. The Sterilgarda Max Racing Team are 4th in the Team’s rankings.
More speed awaits Husqvarna Motorcycles at the Red Bull Ring in two weeks. The CryptoDATA Motorrad Grand Prix von Österreich takes the world championship to Spielberg in the depths of Austria.
John McPhee: “The bike was working great but we geared it for a slightly faster race and for a higher speed compared to the pace we found. We were all tightly bunched and it was a bit frustrating. I felt really good but Moto3 is like that! I tried to make it to 3rd on the last lap but someone rode into the side of me and I lost some places. We had a sniff of the podium but it wasn’t to be. The positives are that we had the speed and on a track where the slipstream wasn’t so crucial I think we might have been able to pull away.”
Results – 2022 Moto3 World Championship, Round 12
1. Dennis Foggia (Honda) +37:30.120, 2. Jaume Masia (KTM) +0.252, 3. Deniz Öncü (KTM) +0.297, 7. John McPhee (Husqvarna) +0.932, DNF. Ayumu Sasaki (Husqvarna)
Moto3 world championship standings
1. Sergio Garcia (GASGAS) 182pts, 2. Izan Guevara (GASGAS) 179, 3. Dennis Foggia (Honda) 140. 6. Ayumu Sasaki (Husqvarna) 113, 16. John McPhee (Husqvarna) 33
About Michael Le Pard 8218 Articles
"Mr. Totalmotorcycle". Owner and Founder of Total Motorcycle. Supporting over Motorcyclists and Motorcycling for 23 great years. Total Motorcycle is my pride and joy and being able to reach out 375 million people has been incredible but I could not have done it without the support of my visitors, readers and members, thank you so much! You are making a difference to millions of riders worldwide. Thank you.
Website Facebook Instagram Twitter YouTube LinkedIn

Specialty Features And Packages: Can-Am Off-Road Has It All For The Adventurous

September 12, 2018 Michael Le Pard News Comments Off on Specialty Features And Packages: Can-Am Off-Road Has It All For The Adventurous

Richmond Hill, ON. True to its motorsport heritage and passion for performance on the track, BMW Canada is bringing the iconic BMW M Festival to the continent for the first time ever from July 13th […]