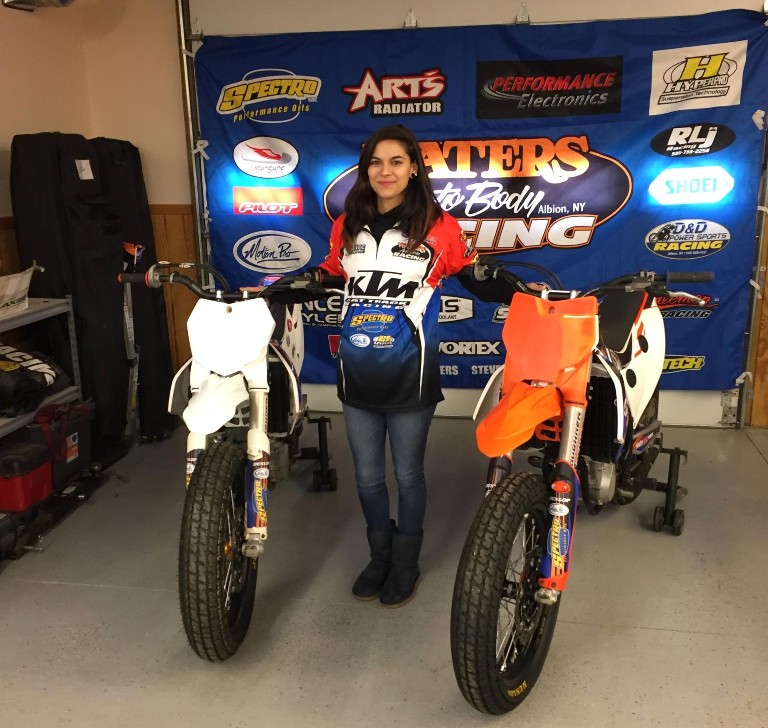 ALBION, NEW YORK (January 30, 2018) – Waters Autobody Racing has announced its team for the 2018 American Flat Track season, and it’s not only chock full of youth, enthusiasm and skill, it’s co-ed, as well.

AFT Singles competitor Wyatt Anderson, who podiumed three times in 2017 and ended up seventh overall in the title chase, will move to the AFT Twins presented by Vance & Hines class in 2018. Sandriana Shipman, an up and coming racer who’s shown plenty of promise and potential, will ride the team’s KTMs in the AFT Singles division.

“This is all very exciting for us,” said team principal Dave Waters. “We were impressed with Wyatt’s results at the end of the 2017 season. We went to Daytona with no expectations and [Wyatt] fell just shy of the win. The experience and maturity he gained throughout the 2017 season showed our team how badly he wanted to [win], so we purchased a pair of Yamaha FZ-07s to add to the fleet. Rhonda and I discussed the restrictions and the gradual phase out of the over-850cc engines and decided the time was now.”

Wyatt Anderson will move from Singles to Twins in 2018, again for Waters Autobody Racing.

“I couldn’t be happier to join forces with Waters Autobody Racing again in 2018,” said 21-year-old Anderson. “When they gave me the opportunity to ride for them at Daytona [in 2017] it led to the greatest season of my professional career. I’m excited to ride the AFT Twins class in 2018, and I have a couple of options in the Yamaha FZ-07 and KTM Super Duke. The drastic differences in the two bikes ensures that we will have a suitable bike for all 18 rounds of the 2018 American Flat Track season.”

Shipman, who’s 23, is a young competitor the Waters are plenty excited to have aboard.

“We see some great things in Sandriana,” Dave Waters said. “She didn’t have a lot of support last year, but she showed a bunch of skill and determination, especially when she borrowed Sammy [Halbert’s] back-up bike and made the Main at Calistoga. We like giving up-and-coming riders a shot. And with Wyatt moving to AFT Twins, and our KTM 450s just sitting there, we felt this would be a great opportunity to give Sandriana a shot.”

“I really wanted to help Sandriana out when I saw the dedication and drive she showed after last year’s season,” said Rhonda Waters. “It reminded me of when I was younger and trying to race every weekend, and all the people who rallied behind me to make it happen. It is my time to pay it forward. It’s exciting for us!”

Shipman has been a regular fixture at New York-area club races since her father Ron decided to take her to an indoor race at the Thunderdome in Middleton, NY. From that day she’s been hooked on dirt track, and has typically ridden whatever machinery has been at her disposal. With the help of friends P.J. and Keith Jacobsen, she threw together a vintage bike and raced her way to a vintage national championship in 2016. And last year she scored her first National points after making the AFT Singles main at Calistoga.

“I’m extremely grateful to have the opportunity to show what I can do on a well-established team like Waters Autobody Racing,” says Shipman. “I owe a huge thanks to my friends, family and supporters who’ve helped me get to this point in my career, and I’m going to continue working hard to make them proud.”

Dave and Rhonda Waters would like to thank and recognize their past and present sponsors, including D&D Power Sports, RLJ Racing, Newman Racing, Spectro Oils, Evans Coolant, Motion Pro, Performance Electronics, Wiseco Pistons, Saddleman, K&N Filters, Vortex, RX Excel, Full Spectrum Batteries, Web Cams, Steve Fortunato and Robin Mooney. Waters Autobody and their riders are looking to secure support to make all 18 AFT rounds in 2018, and to accomplish that they’re looking for partners and are happy to speak anyone with a product or service to promote.

About Michael Le Pard 7493 Articles
"Mr. Totalmotorcycle". Owner and Founder of Total Motorcycle. Supporting over Motorcyclists and Motorcycling for 23 great years. Total Motorcycle is my pride and joy and being able to reach out 375 million people has been incredible but I could not have done it without the support of my visitors, readers and members, thank you so much! You are making a difference to millions of riders worldwide. Thank you.
Website Facebook Instagram Twitter YouTube LinkedIn

The Monster Energy Yamaha Factory MXGP and MX2 teams are preparing for the final two rounds of the 2021 FIM Motocross World Championship. The season will end with a doubleheader in Mantova, Italy, with the […]