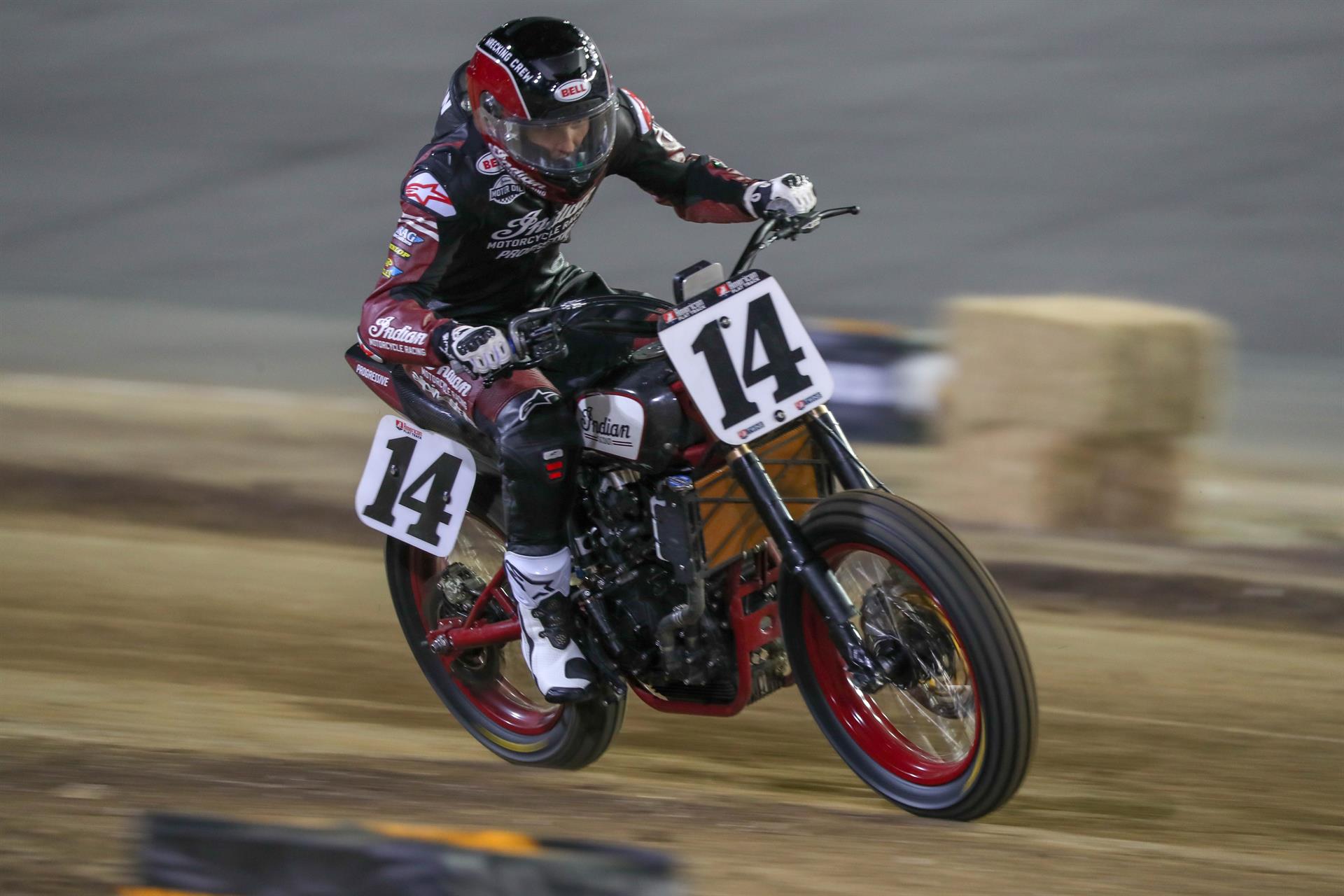 Bauman went handlebar-to-handlebar with brother Bronson Bauman (No. 37 Indian Motorcycle/Progressive Insurance FTR750) on the opening lap of the 25-lap Main Event under the lights at Daytona International Speedway to secure the lead. Once established, Bauman systematically stretched out an imposing advantage at the front.

TT legend Henry Wiles (No. 17 Bandit Industries/DPC Racing/Wilco Racing Indian FTR750) was desperate to give chase but found himself trapped behind Bauman’s brother and teammate as the leader made his escape.

Wiles finally made his way through near half distance, but at that point it didn’t make a difference. Bauman continued to race off into the distance, further opening the gap before finally cruising past the legendary tri-oval’s start/finish stripe for the final time with a 5.149-second margin of victory.

“To hop out there in the front — it’s all about trying to put in a gap in the beginning,” Bauman said. “I’ve been training hard this offseason. I tried to throw down as much as I could and get a little bit of a gap and maintain the rest of the race.”

Even before Thursday’s win, the ascending Bauman’s profile was rapidly on the rise. And now as the newest member of Indian’s Wrecking Crew, he’s well positioned to take the next step forward and make a run at the 2019 AFT Twins Championship — as evidenced by his stunning form in the season opener.

Besides handing him the (very) early title advantage, Bauman’s triumph also brings the DAYTONA TT win streak of reigning Grand National Champion Jared Mees (No. 1 Indian Motorcycle/Progressive Insurance FTR750) to a halt at two. Those prior victories served as springboards for dominant title runs in ‘17 and ‘18, but Mees’ ‘19 opener packed at least a half-season’s worth of drama into a single night. Mees crashed twice in the Semi and then retired with a mechanical issue in the Main while running fifth.

Meanwhile, Jarod Vanderkooi (No. 20 Harley-Davidson Factory Flat Track Team XG750R Rev X) registered perhaps the hero ride of the evening. After being forced to use a Provisional Start just to make the Main, Vanderkooi battled his way up from the back of the pack to an eventual fourth.

Janisch pushed hard on the race’s opening lap to corral the field behind him and then took full advantage of his superior speed with an open track in front of him. He ultimately wheelied past the checkered flag with a comfortable 2.577 seconds to spare.

“To start off Daytona with a victory… it’s amazing,” Janisch said. “Last year, we left here with a second, and that was a great way to start off the season. Just putting in all the work over the course of the winter and leaving here with a win is amazing. The Roof Systems team has really made a home for me. We’ve really built a great program.”

Janisch was followed to the line by Dalton Gauthier (No. 122 D&D Cycles/FlatTrack.com KTM 450 SX-F), who registered a remarkable ride to complete his “Road to Recovery” where he started it — on the podium.

Gauthier was victorious in the first AFT Singles DAYTONA TT Main Event back in 2017 and was stacking wins on top of that one before being suspended for violating the sanctioning body’s substance abuse policy. After sitting out the majority of the past two seasons, Gauthier only learned he would be eligible to compete again days ago. He made the most of his second chance.

And in an always merciless DAYTONA TT in which numerous AFT Singles title hopefuls don’t even make the Main Event due to the ocean deep field teeming with big name wild cards hailing from multiple nations and racing disciplines, defending class champ Dan Bromley (No. 1 Red Bull KTM Factory Racing 450 SX-F) just did what he does.

After earning last year’s crown on the strength of 13 podiums in 18 races, Bromley is now one for one in 2019 to open his title defense with a third-place result.

Be sure to tune into the feature broadcast of the DAYTONA TT on NBCSN with flag-to-flag coverage of both Main Events enhanced by in-depth coverage of the many dramatic storylines through exclusive athlete features and interviews. and onboard footage. It will debut on Sunday, March 24, at 4:00 p.m. ET/1:00 p.m. PT and will re-air on Thursday, March 28, at 12:00 p.m. ET/9:00 a.m. PT.

May 13, 2019 Michael Le Pard News Comments Off on MAIDEN MXGP CLASS PODIUM FOR PAULS JONASS AT MXGP OF LOMBARDIA

Japanese motorcycle customizing specialist #customworkszon presented a fascinating #custom model commissioned by #bmwmotorrad. The centerpiece of the machine is the prototype of a completely new boxer engine. CUSTOM WORKS ZON was founded by Yuichi Yoshizawa and Yoshikazu Ueda in the […]