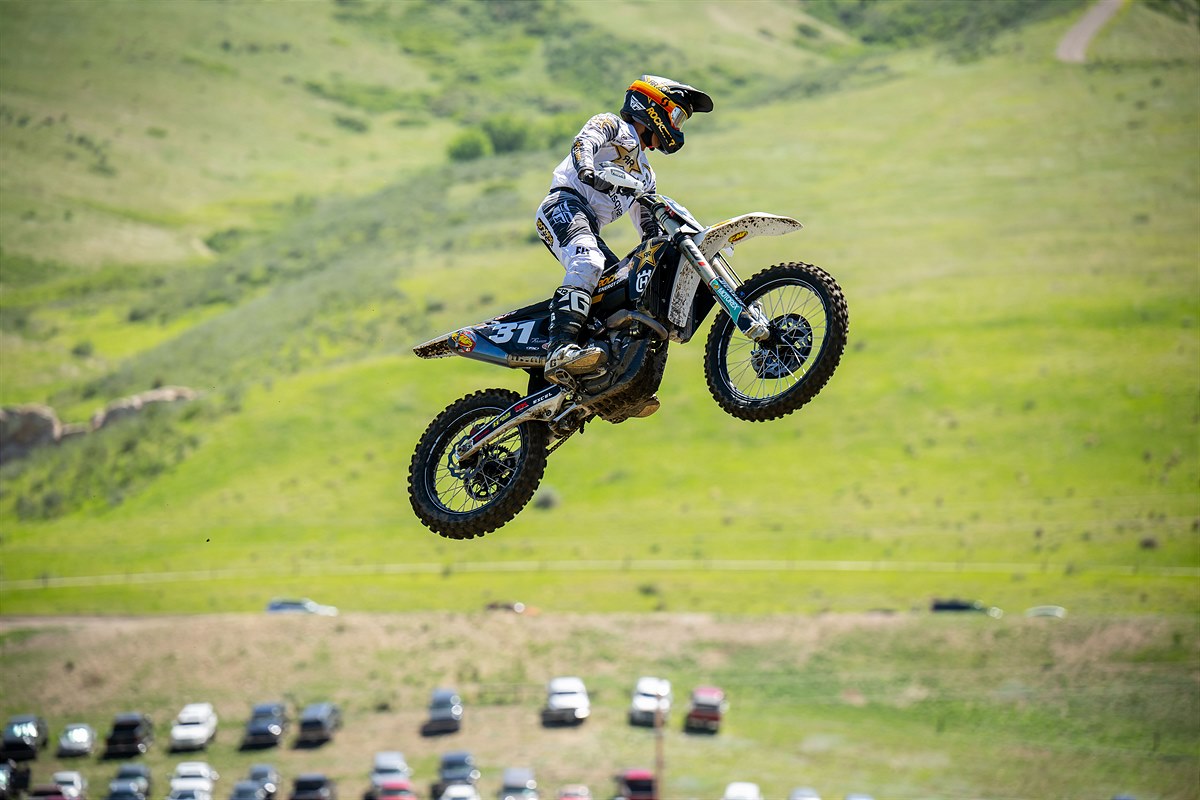 Rockstar Energy Husqvarna Factory Racing’s Stilez Robertson secured a career-best finish in the AMA Pro Motocross Championship on Saturday, racing to sixth overall in the 250MX class with 6-7 moto finishes at the Thunder Valley National. In the 450MX class, fill-in rider Shane McElrath claimed a season-best eighth overall with 12-5 scores at Round 3.
Robertson had a great start in the first moto, charging his way into third on the opening lap. He battled up front in fifth before getting passed halfway into the race. Putting up a good fight late in the race, Robertson attempted to break into the top-five but ultimately finished sixth. In Moto 2, he found himself just inside the top-10 off the start and he climbed into seventh early on. Racing steadily to the finish, Robertson rounded out the day with a solid seventh, giving him sixth overall on the day.
“Today was pretty good,” Robertson said. “I went 6-7 in the motos, so it was the best day ever in outdoors for me. Six motos down and 18 to go, so let’s keep it going! I’m having fun and the team is killing it, so I’m looking forward to the rest.”
Fill-in rider Shane McElrath had a season-best performance at Round 3, finishing the day off strong with fifth in Moto 2. McElrath had a 12th place start in the first moto and he battled just outside the top-10 all race to lock in a 12th place finish. In Moto 2, he charged off the line to put himself into sixth early on and he battled up to fifth by the sixth lap. From there, he kept a strong pace into the final moments to secure a season-best finish of fifth in the second moto.
“Much better today and a much better week all-around,” McElrath said. “We had a couple good riding days this week – actually my best ones yet – and we made really good progress on the bike. I think I’m just growing confidence every time I’m on the bike. It took me a while to get going today, so I need to work on that, but we’re taking big steps and I’m happy.”
Team rider Jalek Swoll grabbed an eighth-place start in Moto 1 and he fought his way up to seventh heading into the midway point of the race. While running eight, Swoll experienced a big crash with a few laps to go and wasn’t able to continue racing for the rest of the day.
Next Event (Round 4): June 18 – High Point National – Mt. Morris, Pennsylvania
Round 3 Results: Thunder Valley National
450MX Results
1. Ken Roczen (HON) 2-1
2. Eli Tomac (KAW) 1-3
3. Chase Sexton (HON) 4-2
…
8. Shane McElrath – Rockstar Energy Husqvarna Factory Racing, 12-5
250MX Results
1. Jett Lawrence (HON)
2. Hunter Lawrence (HON)
3. Levi Kitchen (YAM)
…
6. Stilez Robertson – Rockstar Energy Husqvarna Factory Racing, 6-7
41. Jalek Swoll – Rockstar Energy Husqvarna Factory Racing, 36-DNS
450MX Rider Point Standings
1. Chase Sexton – 134 points
2. Ken Roczen – 129 points
3. Eli Tomac – 120 points
…
10. Shane McElrath – Rockstar Energy Husqvarna Factory Racing, 65 points
250MX Rider Point Standings
1. Jett Lawrence – 139 points
2. Hunter Lawrence – 127 points
3. Jo Shimoda – 101 points
…
8. Stilez Robertson – Rockstar Energy Husqvarna Factory Racing, 74 points
16. RJ Hampshire – Rockstar Energy Husqvarna Factory Racing, 37 points
About Michael Le Pard 7922 Articles
"Mr. Totalmotorcycle". Owner and Founder of Total Motorcycle. Supporting over Motorcyclists and Motorcycling for 23 great years. Total Motorcycle is my pride and joy and being able to reach out 375 million people has been incredible but I could not have done it without the support of my visitors, readers and members, thank you so much! You are making a difference to millions of riders worldwide. Thank you.
Website Facebook Instagram Twitter YouTube LinkedIn

Only two days after the extraordinary success of Pecco Bagnaia taken at his home Grand Prix at Misano last Sunday, the Ducati Lenovo Team returned to action at the same track yesterday and today for […]