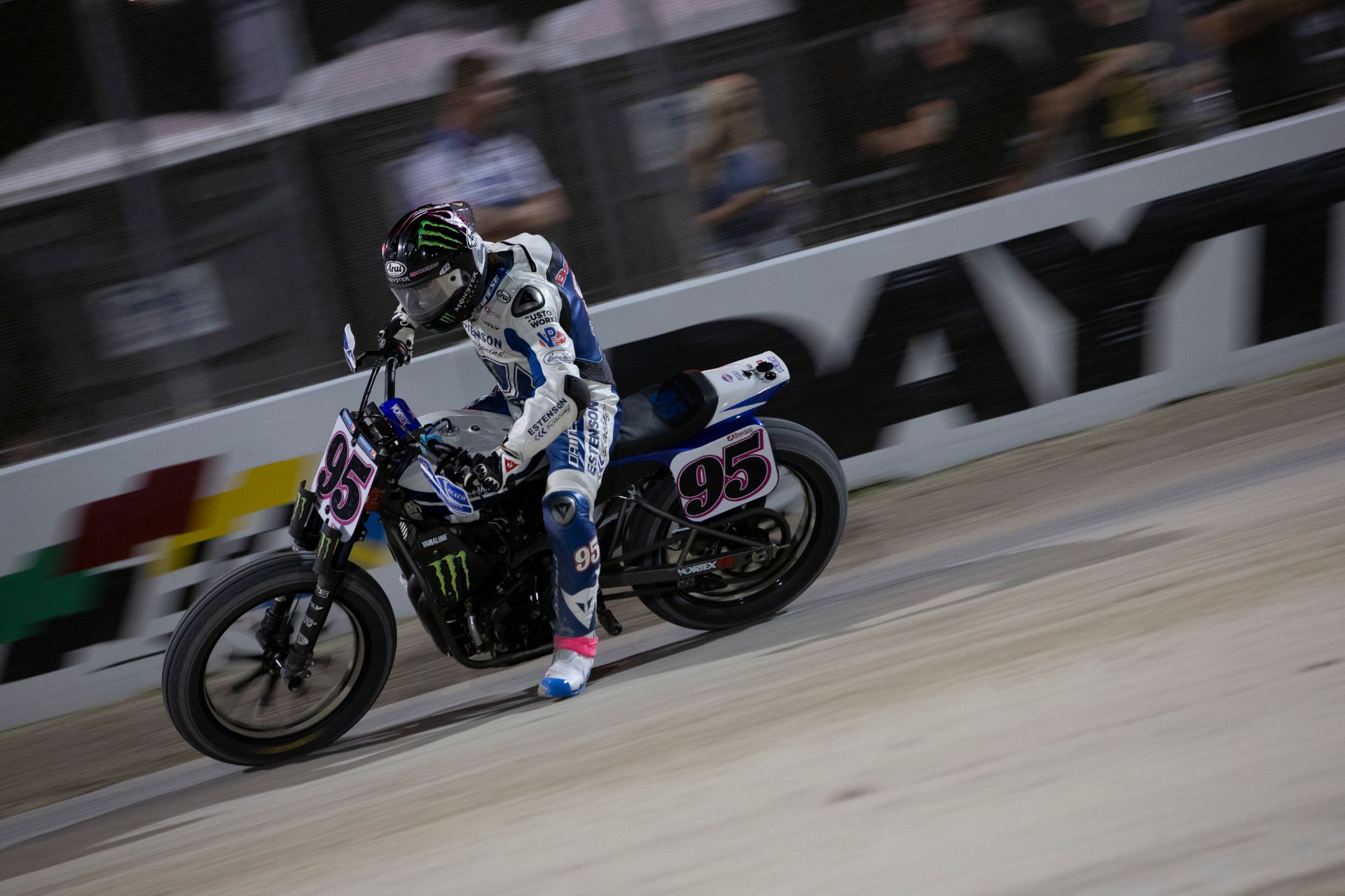 Estenson Racing put the final touches on a championship-winning Progressive American Flat Track season on a Saturday night finale dominated by rain delays at the Daytona International Speedway. With the Semis canceled and Main Events shortened, Mikey Rush led the way for the team, finishing in fourth in the abbreviated AFT Singles main. New class champ Dallas Daniels ended his dominant season with an uncharacteristic ninth, while AFT SuperTwins pilot JD Beach rounded out his year with a run to 12th.

Rush started the Main on Row 2 after qualifying in eighth position and having no Semi in which to improve his starting slot. Despite that disadvantage, he quickly picked up a handful of positions running up top to move into fifth. Fourth position didn’t come quite as easy on the single-line battlefield, but once through, Rush immediately shook free and closed in on the three-rider scrap for the win. With just a four-minute Main in which to work, he simply ran out of time in his attempt to join that fight despite clocking the race’s fastest lap. Still, Saturday’s fourth-place finish allowed Rush to lock down a fourth-place ranking in the final AFT Singles championship order.

Daniels was even unluckier than his Estenson Racing teammate with the cancellation of the Semis. That left him on Row 4 in a shortened Main Event on a track that provided few passing opportunities. He still managed to work up to ninth after qualifying 13th, ending his successful AFT Singles title campaign with one final top ten. Ultimately, the otherwise frustrating evening left Daniels’ reflective of his eight-win season and looking ahead to a stronger showing in Daytona in 2021.

Beach had hoped to build on his Friday eighth. The early returns were promising in that regard, as he posted the fifth-fastest time in the opening practice session. However, the changing conditions and subsequent delays worked against him. Starting on Row 4 in the Main, Beach got away in 16th. He charged forward from there, climbing his way up to 12th by the time he took the checkered flag. That finish paid seven additional points to a season in which he scored four top 10s and ended the year ranked 14th in the AFT SuperTwins standings.

“It was definitely a crazy day – much different from normal with no Semis and very minimal track time. I wish it had been more of a normal schedule, but I’m glad we were able to get some kind of race in with how bad the weather was. The Singles guys kind of shot themselves in the foot with bad qualifying and having to use that as their grid positions for the Main. They both rode hard and charged through the field. They did the best they could.

“JD’s day started off well. He showed some promise, but the qualifying thing didn’t work out so well for him either. He had to start from the back, which wasn’t ideal here – it was a hard track to pass on, but he rode hard and looked good on the bike. We’ve got a lot of work to do and plan to come back next year stronger.”

“It was crazy we actually got the race in with all the bad weather. I had to start from the outside of the second row, which wasn’t a terrible spot – at least it wasn’t all the way in the back. I made the most of it. I got a decent jump and made some passes early on the outside, but I couldn’t stay up there for long when the moisture went away. I dove to the bottom and worked on fourth for a while and ended up getting by. I started tracking the leaders down, but they shortened our race to four minutes which made it hard to get it done. I ran out of time, basically. It would have been nice to get on the podium, but I’m happy to get another top-five. Big thanks to Estenson Racing for giving me the opportunity this year. I have really enjoyed myself.”

“For whatever reason, we struggled in qualifying. I was having some trouble with some grip and some front-end pushing. We made changes and were feeling good for the Semi, but then the rain hit. We sat here forever and ever, and then they said we were going to skip the Semi and go straight to the Main Event. I qualified 13th, so that gave me the first choice for the fourth row, which is a terrible spot to be in because it ended up being a one-line groove. I went up on the outside and made the best of it and ended up ninth.

“It wasn’t our worst finish of the year, but we just kind of struggled a little bit. But if we’re going to struggle, now is the time to do it after we already wrapped up the championship. We had an amazing year, and Daytona is an awesome place to wrap it up. But it’s also kind of a crapshoot — anything can happen here at the Daytona Short Track and they proved that this weekend. I hope we come back here to start the 2021 season. I’m looking forward to defending the championship next year.”

“The day was definitely hard. We started off good but just kind of struggled with how the track changed. We were getting ready to go racing and then it rained. Then it stopped and they worked on the track and it rained again. It just dragged on and on. It wasn’t the night we had hoped for, and we didn’t finish the year the way we would have liked, but we’ll try again next season.”

Round 4 of the AMA U.S. Hard Enduro Series brought on some challenging conditions in Little Hocking, Ohio over the weekend and Rockstar Energy Husqvarna Factory Racing’s Colton Haaker rose to the occasion, securing a […]

MILWAUKEE (Nov. 1, 2021) – From toy drives to charity rides, Harley-Davidson motorcycle riders have a strong history with giving back to their communities. In honor of this commitment to community during the holiday season, Harley-Davidson […]