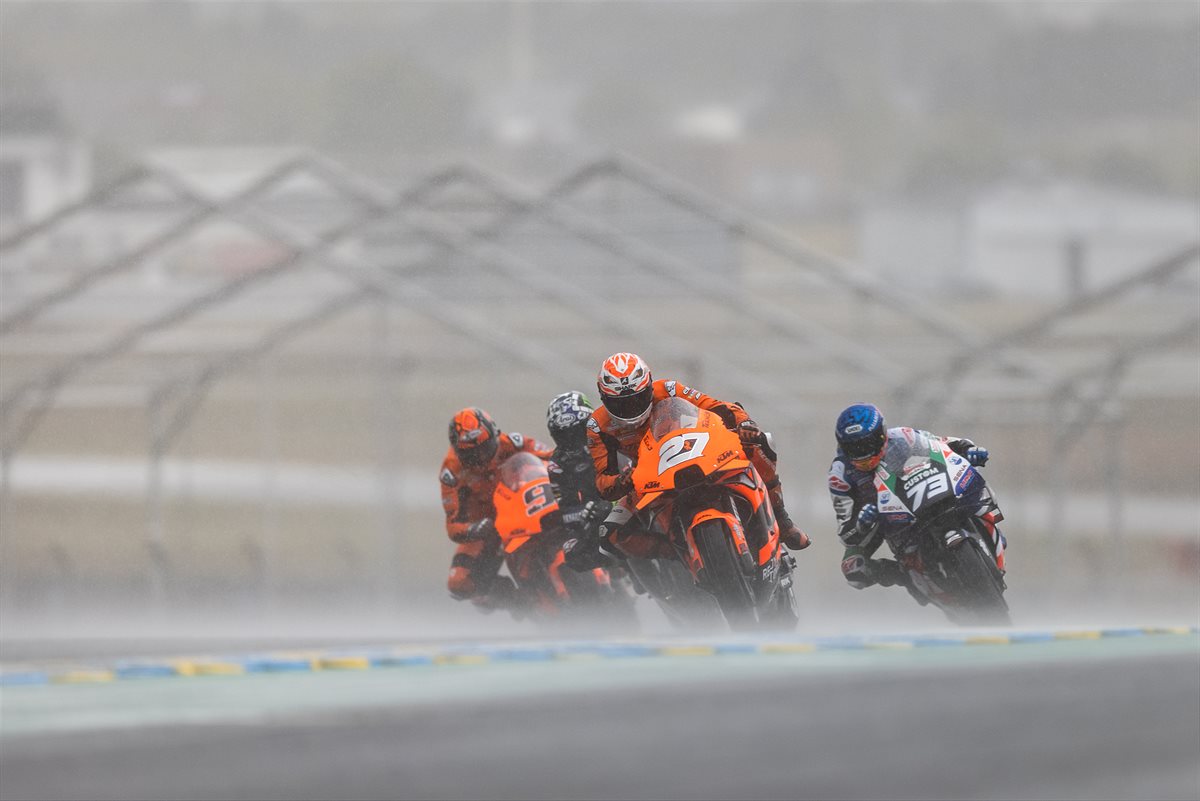 – Best result of 2021 MotoGP so far for Iker Lecuona in 9th
– Red Bull KTM Factory Racing’s Brad Binder takes 13th as Miguel Oliveira falls out
The unstable weather conditions that had been such a forceful presence across the fifth round of 2021 MotoGP struck on Sunday and created busy, tricky and bizarre scenes for the 27-lap race at Le Mans.
The Shark Grand Prix de France initially began on dry asphalt but looming clouds meant the first allotted ‘flag-to-flag’ sprint in almost four years was declared and teams had to prepare the spare bikes with wet settings.
After just four laps of the race the heavens opened for a short, sustained period, and the MotoGP field filtered into the pitlane. Miguel Oliveira had been the highest runner in the field but then lost the front end of his bike into Turn 3 and retired. Danilo Petrucci – who qualified last on the grid – had made his way into the top ten and then rode superbly as the track dried to reach the top five. It was a confidence-boosting performance by the Italian who had triumphed at Le Mans in 2020.

Behind Petrucci, Iker Lecuona battled hard and his determination, shown by his last corner lunge to steal 9th position from Maverick Viñales, was rewarded with his biggest points-haul of the campaign so far. Brad Binder, one of three KTM riders experiencing the non-stop flag-to-flag format for the first time, guided his RC16 to 13th.

Both Red Bull KTM Factory Racing and Tech3 KTM Factory Racing will be hoping for a more consistent climate for the Gran Premio Oakley D’Italia around the splendid, fast and spectacular setting of Mugello in two weeks time.
Danilo Petrucci: “I’m very, very happy about this race! I made a small mistake while swapping the bikes as I didn’t put in the first gear, which made me lose some positions. Then it was really easy to make mistakes, when we rejoined the race with wet tires. Anyway, a top five is always very good. We are starting to get more used to the bike. For sure, I wanted to be on the podium but for this I have to be perfect and a bit faster. We surely need to improve our Qualifying but I’m happy.”
Iker Lecuona: “Honestly, I’m really happy. I felt very strong all weekend in wet and dry conditions, I felt fast and finished closed to the top ten in each session. On the first laps, I overtook many riders, then the rain came and I went to the pitlane.Unfortunately, I didn’t bring enough heat into the tyres when I went out again, I made a mistake, went to the gravel, but picked up the bike again fast. I was only P17, but started to focus again and finally, I could overtake a rider in the last corner of the last lap. I’m very happy and want to thank my team, because they helped me a lot. I’m sorry for the mistake but I learned a lot and finished again in the top ten.”
Brad Binder: “A crazy race today. I had some problems at the start and ended up last into Turn 1. I managed to get past a few guys but then a few laps into the race we saw really dark clouds and some rain spots. It then really started pouring as we went through Turn 3. It was hard to get back to the pitlane because there was no grip at all. It was pretty dangerous. Starting again on wet tires the grip was the worst we’ve had in the wet all weekend. It was my first flag-to-flag. A difficult race, a difficult weekend. I was glad to finish but not the position we wanted.”
Miguel Oliveira: “A shame for the whole team not to finish the race today. We were strong and had the capability to get close to the podium. Now we will move on and think about the next Grand Prix.”
Mike Leitner, Red Bull KTM Race Manager: “A very turbulent race and difficult to find the right time for the guys to come in and change bikes. It was hectic and a big mix. Danilo went out in a good position and worked his way through the top ten. Miguel’s crash at Turn 3 was unexpected but these races can produce surprises and we cannot be too down for him because he’d had a good weekend. Well done to Tech3 KTM Factory Racing for getting both riders in the top ten and Danilo making our second highest finish of the season. I’m so happy for him and the crew. Iker did well also to fight up until the last corner. We couldn’t ask for more. Brad scored points for 13th but we’d normally like to see him in a different position: we know we have to work with him for the wet conditions. With so many changing circumstances it was a demanding weekend so I want to say thank you to both teams and all the staff for the big effort here in France.”
Results MotoGP Shark Grand Prix de France 2021
1. Jack Miller (AUS), Ducati 47:025.473
2. Johann Zarco (FRA), Ducati +3.970
3. Fabio Quartararo (FRA) Yamaha +14.468
4. Francesco Bagnaia (ITA) Ducati +16.172
5. Danilo Petrucci (ITA), Tech3 KTM Factory Racing +21.430
9. Iker Lecuona (ESP), Tech3 KTM Factory Racing +40.432
13. Brad Binder (RSA), Red Bull KTM Factory Racing +59.377
DNF. Miguel Oliveira (POR), Red Bull KTM Factory Racing
About Michael Le Pard 5838 Articles
"Mr. Totalmotorcycle". Owner and Founder of Total Motorcycle. Supporting over Motorcyclists and Motorcycling for 21 great years. Total Motorcycle is my pride and joy and being able to reach out 330 million people has been incredible but I could not have done it without the support of my visitors, readers and members, thank you so much! You are making a difference to millions of riders worldwide. Thank you.
Website Facebook Instagram Twitter YouTube LinkedIn