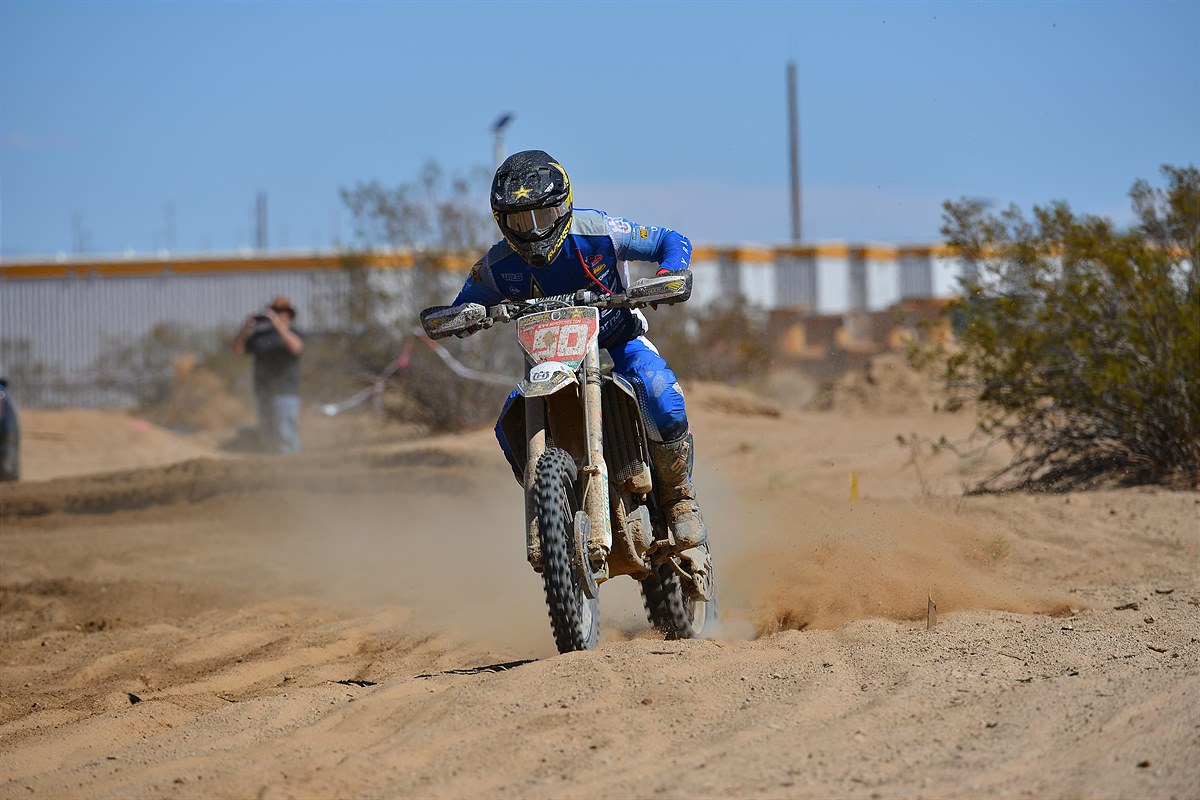 Rockstar Energy Husqvarna Factory Racing’s Austin Walton has shown his skill and consistency by capturing a top-five finish at the first seven rounds of the AMA National Grand Prix Championship but had a tough break, scoring 18th in the Pro class, at this weekend’s race in Ridgecrest, California. Fellow Husqvarna Motorcycles-mounted Justin Hoeft had a tremendous performance, clinching his second podium result of the season, after he took the runner-up spot at Round 8.
Walton got off to a strong start, moving into the runner-up spot within a few turns. Coming through scoring at the end of the first lap, he was just three seconds behind the leader. By the second lap, he was gifted the lead when his competitor crashed. Walton continued to swiftly navigate the desert aboard his FX 450 up until Lap 5 when his fuel line got punctured. He made a return trip to the pits to secure more gas, but was unaware at the time that the fuel line was damaged. He refueled and returned to the course, only to run out of gas once again. Unwilling to give up, he pushed the bike back to the pit area, refueled again and fought his way to the finish line, ultimately scoring 18th in the Pro class, which was enough to salvage three points in the championship race and he continues to sit third in the standings.
“I got a decent start and ended up working my way into second place on the first couple of turns,” Walton said. I rode there for a lap or two before getting around Trevor [Stewart] due to him crashing and then kept a pretty good lead. I felt really good on the bike, the suspension was working good and my body felt good but then we had some unfortunate stuff happen where the fuel line ended up getting punctured, but at the time I didn’t know it. It was a good effort just to make it to the finish line. We didn’t finish where we’d like to, but it was a freak deal. Just one of those days. Bummer day, but we gave it our best effort. We know we have the speed, so we’ll get it next time.”
Next Round (9): Blythe, California – October 30, 2022
Pro Results – Round 8
1. Dante Oliveira (KTM)
2. Justin Hoeft (HQV)
3. Ryan Surratt (HON)
…
18. Austin Walton – Rockstar Energy Husqvarna Factory Racing
Pro Championship Standings
1. Dante Oliveira – 210 points
2. Cole Martinez – 172 points
3. Austin Walton – Rockstar Energy Husqvarna Factory Racing, 146 points
About Michael Le Pard 8449 Articles
"Mr. Totalmotorcycle". Owner and Founder of Total Motorcycle. Supporting over Motorcyclists and Motorcycling for 23 great years. Total Motorcycle is my pride and joy and being able to reach out 375 million people has been incredible but I could not have done it without the support of my visitors, readers and members, thank you so much! You are making a difference to millions of riders worldwide. Thank you.
Website Facebook Instagram Twitter YouTube LinkedIn

Honda Racing Corporation wishes to announce that Livio Suppo has decided to move on from his role as Repsol Honda’s Team Principal and leave the Company. Livio Suppo joined HRC in 2010, as Communications and […]

Team Suzuki Press Office – October 2. Gino Rea has won the opening race of the weekend at Donington Park, leading from lights to flag to deliver a wet weather masterclass. Rea started the 10th […]