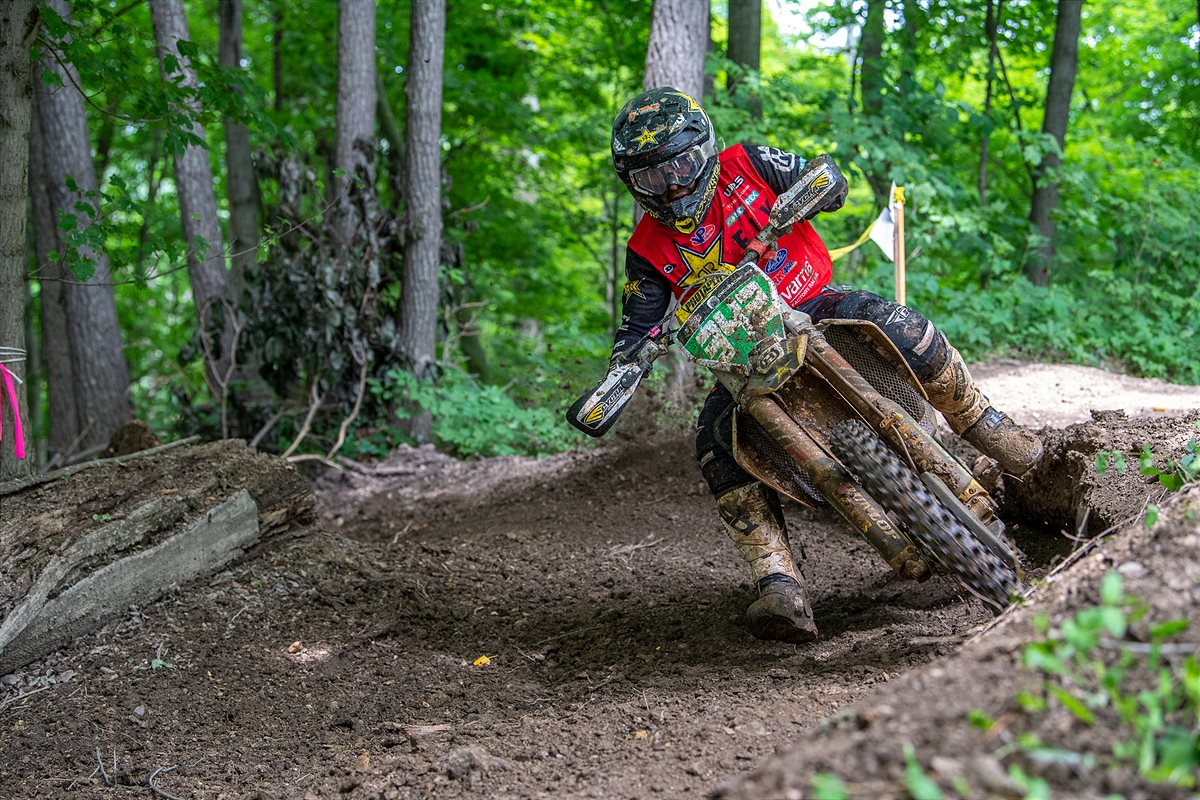 Rockstar Energy Husqvarna Factory Racing Team’s Craig DeLong earned a big win on Sunday at the John Penton GNCC in Millfield, Ohio, where he now holds the lead in the XC2 250 Pro Championship after seven rounds of racing.
DeLong didn’t get off to the best start in the XC2 Class but he quickly charged his way into the lead on the opening lap. He slowly broke away from the field with each lap that passed and by the halfway point, he held a minute-and-a-half lead over the second-place rider. DeLong continued to charge in the final laps to post a victory of almost three-minutes in the class, while also earning an impressive top-five finish in the overall running.
“I felt really good today,” DeLong said. “Everything seemed to really be clicking and I hit my marks and was flowing really good. I had a blast riding out there and it was fun to lead the whole race from the first lap to the finish.”
Next Event: Round 8 – Hoosier GNCC – July 12, 2020
John Penton GNCC Results
XC2 250 Pro Class Results
1. Craig DeLong – Rockstar Energy Factory Racing Team
2. Cody Barnes (BET)
3. Jonathan Girroir (KTM)
XC2 250 Pro Championship Standings
1. Craig DeLong – Rockstar Energy Factory Racing Team, 178 points
2. Mike Witkowski – 170 points
3. Jonathan Girroir – 164 points
About Michael Le Pard 4435 Articles
"Mr. Totalmotorcycle". Owner and Founder of Total Motorcycle. Supporting over Motorcyclists and Motorcycling for 21 great years. Total Motorcycle is my pride and joy and being able to reach out 330 million people has been incredible but I could not have done it without the support of my visitors, readers and members, thank you so much! You are making a difference to millions of riders worldwide. Thank you.
Website Facebook Instagram Twitter YouTube LinkedIn

MXGP Back in Belgium

August 4, 2017 Michael Le Pard News Comments Off on MXGP Back in Belgium

DAYTONA BEACH, Fla. (August 24, 2018) – Nine-time AMA Grand National Champion Scott Parker, who notched an amazing 94 wins in his stellar career, has been named Grand Marshal of the 100th running of the […]