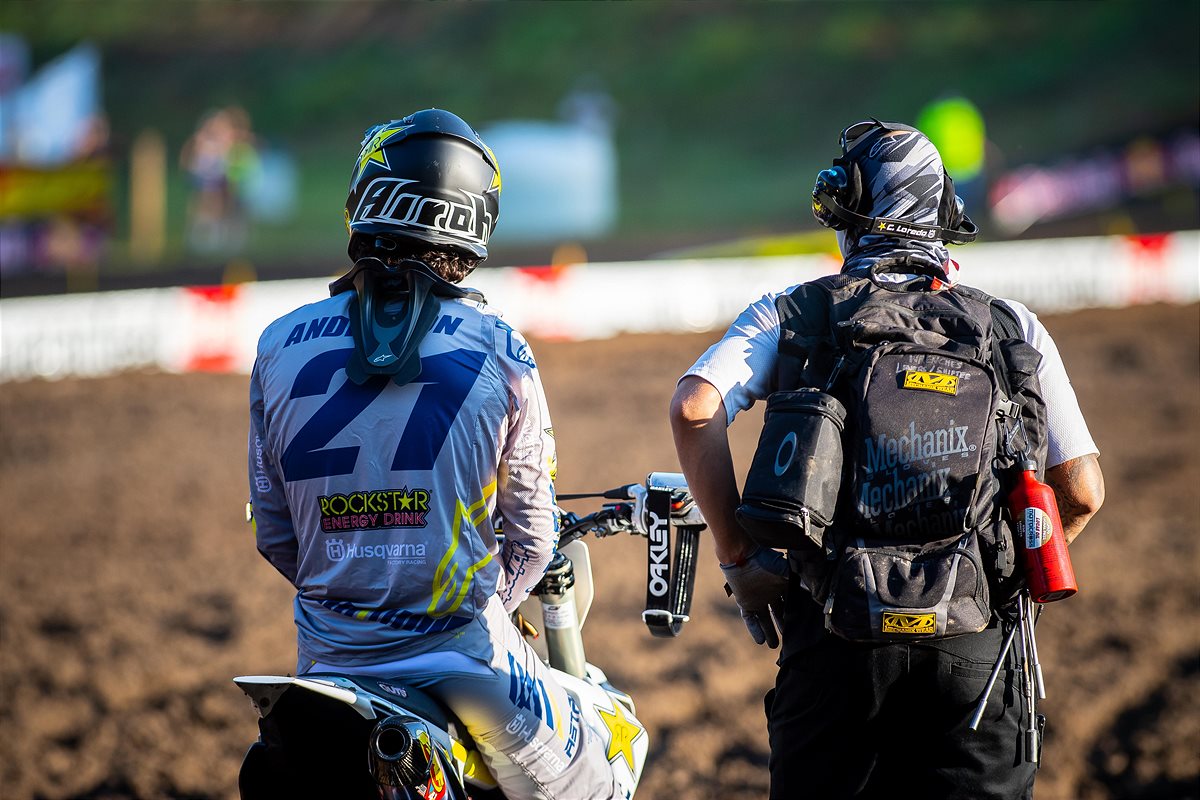 Rockstar Energy Husqvarna Factory Racing Team’s Jason Anderson successfully underwent surgery on Thursday morning to remove hardware that was originally used to repair a broken arm that he sustained during a 2019 practice crash.
The unplanned surgery comes after Anderson aggravated the area last Saturday in an abrupt landing during Moto 1 of the Ironman National, where he ultimately made the decision to end the day early due to extreme discomfort in his arm. After further evaluation by the Alpinestars Mobile Medical Unit, the X-ray results discovered that a plate and screws in his forearm had backed off the bone and surgery was immediately scheduled. The Round 1 first-moto winner is expected to miss at least the next few rounds of the AMA Pro Motocross Championship as he mends the new repair.
Rockstar Energy Husqvarna Factory Racing’s Stephen Westfall: “Jason is a tough rider so when his hand and arm started to lose feeling during the first moto at Ironman, he made the smart decision to pull off and get it looked at. It’s unfortunate that he will be out for the next few rounds but we will evaluate his healing progress and determine if he’s able to return to the Pro Motocross Championship this year.”
The 2020 Pro Motocross Championship makes its way to Buchanan, Michigan this weekend for the first-ever double-header at RedBud MX on September 4 and 7.
About Michael Le Pard 5048 Articles
"Mr. Totalmotorcycle". Owner and Founder of Total Motorcycle. Supporting over Motorcyclists and Motorcycling for 21 great years. Total Motorcycle is my pride and joy and being able to reach out 330 million people has been incredible but I could not have done it without the support of my visitors, readers and members, thank you so much! You are making a difference to millions of riders worldwide. Thank you.
Website Facebook Instagram Twitter YouTube LinkedIn

The Pata Yamaha WorldSBK Official Team with Rizla aims to make further improvements to its performance at the fifth round of the FIM Superbike World Championship at MotorLand Aragón this weekend. In previous years, the […]

Yamaha Sweep the EMX250 Podium as Benistant Extends his Championship Lead    Hutten Metaal Yamaha Official EMX250’s Thibault Benistant continued his impressive form at the fifth round of the EMX250 Championship in Mantova, Italy, with […]