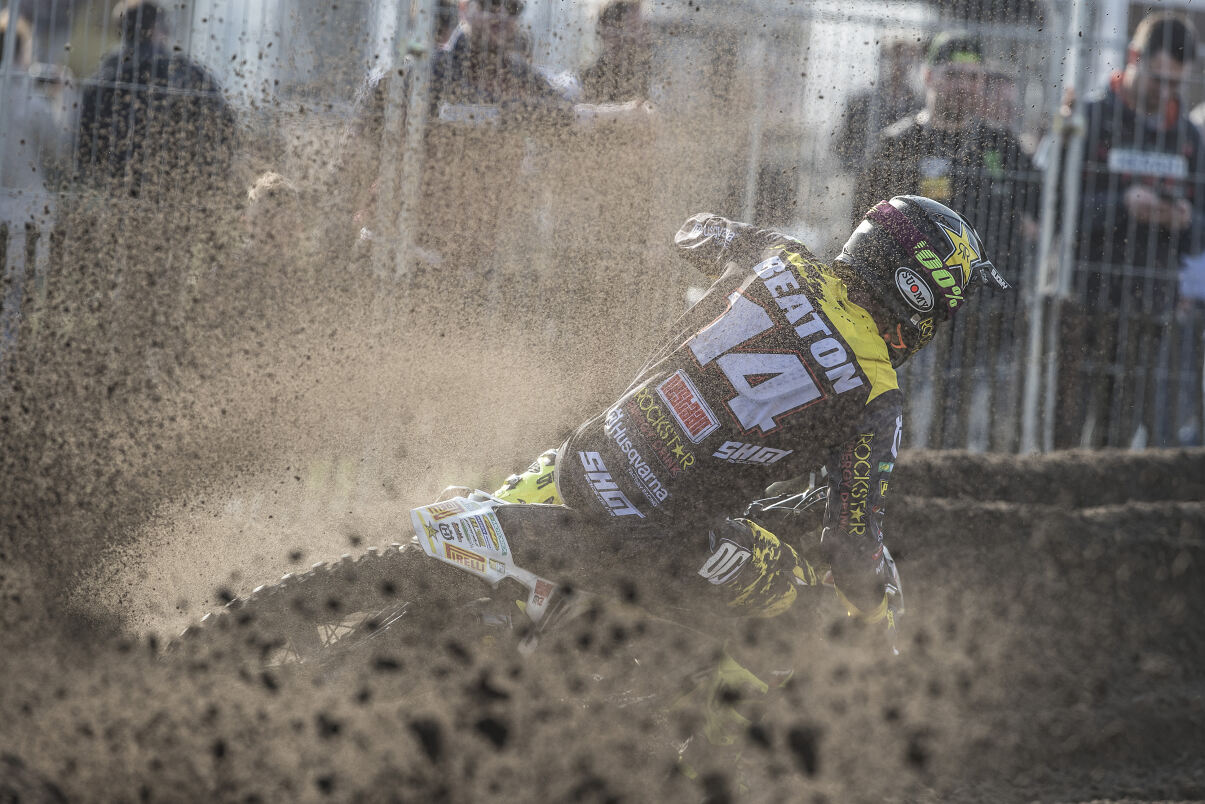 Entering the GP of The Netherlands with the points leader’s red number plate on his FC 250 machine, Thomas Kjer-Olsen put in two solid performances in the Dutch sand. Getting a good start in the opening MX2 moto, Kjer-Olsen found himself in second position at the end of the first lap. Putting is consistent lap times, he went on to secure the runner-up result.

Well-placed in second shortly after the drop of the gate in moto two, Thomas had to settle for an eventual third-place result following a last lap pass by Jago Geerts. Collecting 42 valuable points at the GP of The Netherlands, Kjer-Olsen has extended his MX2 World Championship lead to 23 points over second-placed Henry Jacobi.

Continuing to build on his speed and stamina following injury, Rockstar Energy Husqvarna Factory Racing’s Jed Beaton wrapped up the GP of The Netherlands with 10/15 results for 12th overall in the MX2 category.

Recovering from a collarbone fracture that he sustained during round two of the MX2 World Championship in Great Britain, Rockstar Energy Husqvarna Factory Racing’s Mikkel Haarup was unable to contest the GP of The Netherlands.

In the MXGP category, Rockstar Energy Husqvarna Factory Racing’s Arminas Jasikonis improved on the sixth-place overall result he claimed at the first two rounds of the series, finishing fifth overall at the Dutch GP. Collecting two well-deserved fourth place moto results, the FC 450 powered rider collected the same number of points as the third and fourth-placed competitors but had to settle for fifth overall due to his fourth-place result in the final moto.

The Rockstar Energy Husqvarna Factory Racing team will return to action at the fourth round of the 2019 FIM Motocross World Championship in Italy on April 6/7.

Thomas Kjer-Olsen: “We picked up some good points here in The Netherlands and that’s what matters the most for me. Knowing the track would be rough, my goal coming into the weekend was to remain safe and do my best to maintain the lead in the championship. In the first moto I had a decent pace and crossed the line in second. Then in the final moto I got passed by Geerts while running second again, just before the chequered flag, so I ended up third for second overall. This season will be very long and my goal is to remain consistent until the end of it.”

Jed Beaton: “I had an OK GP and felt good on my bike. In the opening moto my pace was good so I managed to secure a top-10 result. Then in the second moto, I pushed a bit more than I needed to early on and ended up getting a little fatigued. The injury I picked up during the pre-season hasn’t allowed me to spend as much time as I would have liked on a bike. Around a tough track like Valkenswaard it is always important to be on top of your game. At the moment I’m taking one step at a time and I’m trying to get better every time I race.”

Arminas Jasikonis: “For me it was a really good weekend here in The Netherlands. I felt on top form and kept improving my pace every time I was on track. If my starts were a little bit better in the final motos, my overall result would have been even better. Not getting the best of starts in either race, I had to fight my way through the pack. Despite not getting great starts I ended up sharing the exact same points as third placed Tim Gajser and that gives me the extra motivation to continue pushing hard. I am really happy with where I’m at right now and I am looking forward to the next GP in Italy.”

Pauls Jonass: “I’m happy with the progress we’re making. My results might not look that good yet, but honestly I feel I am making some great progress in each race. There is a large group of racers battling for the top six and I feel I am getting closer and closer to them. My speed is quite good considering I have limited timed on the bike, but I am still lacking the fitness to sustain the full motos. I know the track at Valkenswaard quite well and for this weekend my goal was to continue improving without taking any unnecessary risks. My speed in the opening part of the second moto was very positive. There is still a lot of work to do and I’m looking forward to the one-month break after the following GP in Italy.”

Download high-res images from the MXGP of The Netherlands here.

Championship Standings – After Round 3

Mission Winnow Ducati team ready for its home round, the Italian Grand Prix at Mugello

May 29, 2019 Michael Le Pard News Comments Off on Mission Winnow Ducati team ready for its home round, the Italian Grand Prix at Mugello

The Mission Winnow Ducati team is ready to resume action at the Autodromo Internazionale del Mugello for the Italian Grand Prix, the sixth round in the 2019 MotoGP calendar and home race for the Borgo […]

Jeremy Seewer and Ben Watson put their Monster Energy Yamaha Factory MXGP backed YZ450FMs inside the top-10 after a tough and treacherous round of Grand Prix racing in Lommel, Belgium. Seewer was seventh overall, while […]