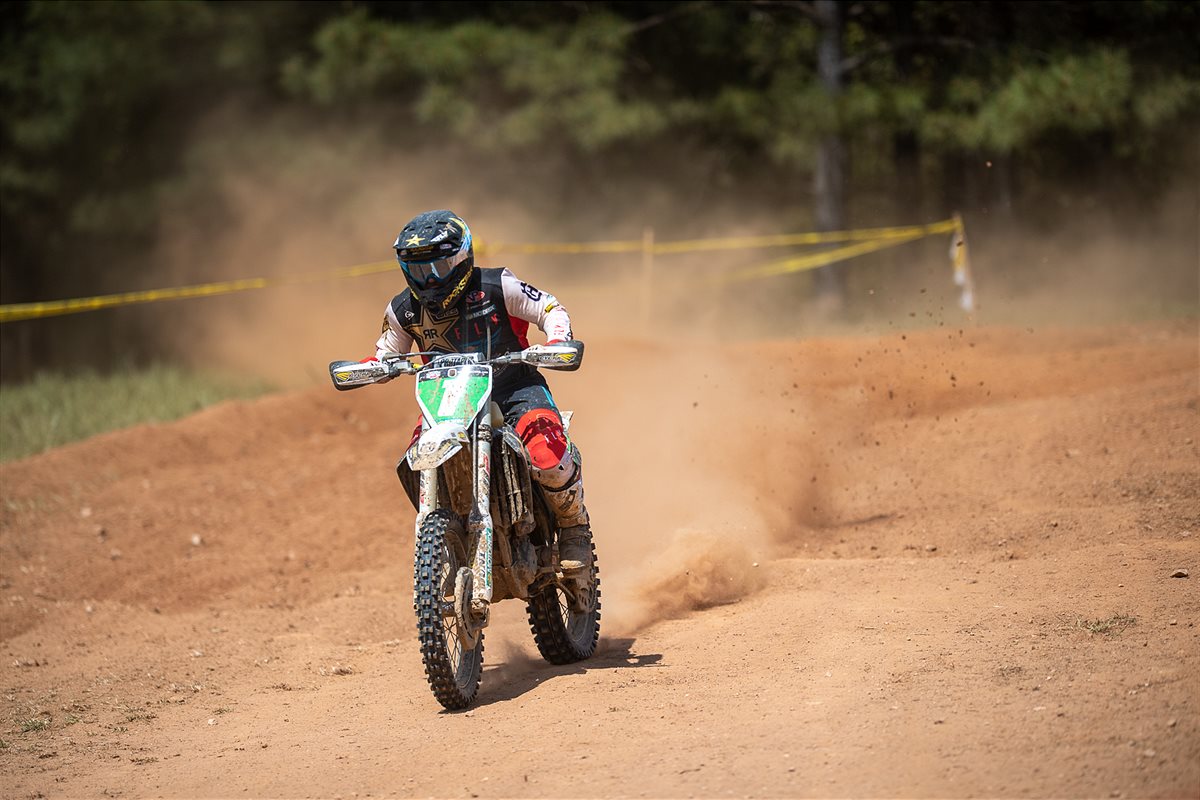 Rockstar Energy Husqvarna Factory Racing’s Craig DeLong earned a runner-up finish in the XC2 250 Pro class on Sunday with a hard-fought performance at Round 5 of the 2021 Grand National Cross Country (GNCC) Series in Union, South Carolina. Teammate Thad DuVall secured the XC1 Open Pro holeshot in his first race back from injury but unfortunate luck struck on the opening lap leaving him to salvage the day in 12th, healthy and ready to move onto the next round.
In the XC2 250 Pro Class, DeLong grabbed a fourth-place start and he battled in the lead pack on the opening lap. He made his way into third on lap two, eventually charging up to the second-place rider to put himself in a favorable position to overtake the position later in the lap. He maintained second for the remainder of the race but some stomach issues held him back from battling for the victory late in the race.
“I ran into some stomach issues late in the race but overall, I felt good,” DeLong said. “We did some work in between the break and got the bike working a lot better and I’m a lot more confident with it so now I just have to work on myself a little bit.”
In the XC1 Open Pro Class, team rider Trevor Bollinger got off to a ninth-place start and he battled in ninth for the first two laps. He passed into eighth on lap three, eventually powering his way up to seventh by the next lap. He maintained a solid pace through the final laps to ultimately secure seventh in the class and a season-best eighth overall for the day.
“We’re plugging along at each race, getting a little better,” Bollinger said. “It’s tough coming into these races and not being 100% so I can’t train and do all my normal stuff at home but we’re just trying to get better every race and it’s working out. I’m just looking forward to the day I can come in here 100% and fight for the podium.”
Team rider Thad DuVall returned to racing after missing the last few rounds due to injury. He got off to a great start in the XC1 Open Pro class as he secured the holeshot and early lead. He led the first half-mile before dropping back to third early on. While running inside the top-five, DuVall experienced a freak issue when a stick got wedged in his bike and ripped the fuel line off, causing him to stop in his tracks. The Rockstar Energy Husqvarna Factory Racing crew made their way out to fix the issue but unfortunately DuVall lost substantial time in his race to be competitive, so he salvaged what he could for a 12th place finish.
“It was my first race back after injury and I started good with the holeshot and was just riding my own race on the first lap,” DuVall said. “I just wanted to use this race to get back into the three-hour shape and test some stuff on the bike. We made some changes during the race, so it was kind of like a test and tune day after the mishap on the first lap. I’m excited to be back racing and having fun.”
Next Round: Union, South Carolina – April 18, 2021
Tiger Run GNCC Results
XC2 250 Pro Class
1. Jonathan Girroir (GAS)
2. Craig DeLong – Rockstar Energy Husqvarna Factory Racing Team
3. Thorn Devlin (BET)
XC1 Open Pro Class
1. Steward Baylor Jr. (YAM)
2. Ricky Russell (GAS)
3. Ben Kelley (KTM)
…
6. Jordan Ashburn (HQV)
7. Trevor Bollinger – Rockstar Energy Husqvarna Factory Racing Team
12. Thad DuVall – Rockstar Energy Husqvarna Factory Racing Team
2021 Championship Standings – After Round 5 of 13
XC2 250 Pro Class Championship Standings
1. Jonathan Girroir – 135 points
2. Craig DeLong – Rockstar Energy Factory Racing Team – 117 points
3. Mike Witkowski – 91 points
About Michael Le Pard 5600 Articles
"Mr. Totalmotorcycle". Owner and Founder of Total Motorcycle. Supporting over Motorcyclists and Motorcycling for 21 great years. Total Motorcycle is my pride and joy and being able to reach out 330 million people has been incredible but I could not have done it without the support of my visitors, readers and members, thank you so much! You are making a difference to millions of riders worldwide. Thank you.
Website Facebook Instagram Twitter YouTube LinkedIn

Just a few days after the last race held last Sunday at Le Mans, the Ducati Team is ready to return to the track this weekend to compete in the first of the two consecutive […]

Published: 24th July 2017. Triumph UK.Considering his obsession with motorcycles since the age of four, Ben Walker has arguably landed the perfect job. His daily routine combines the roles of collector, counsellor and detective as […]