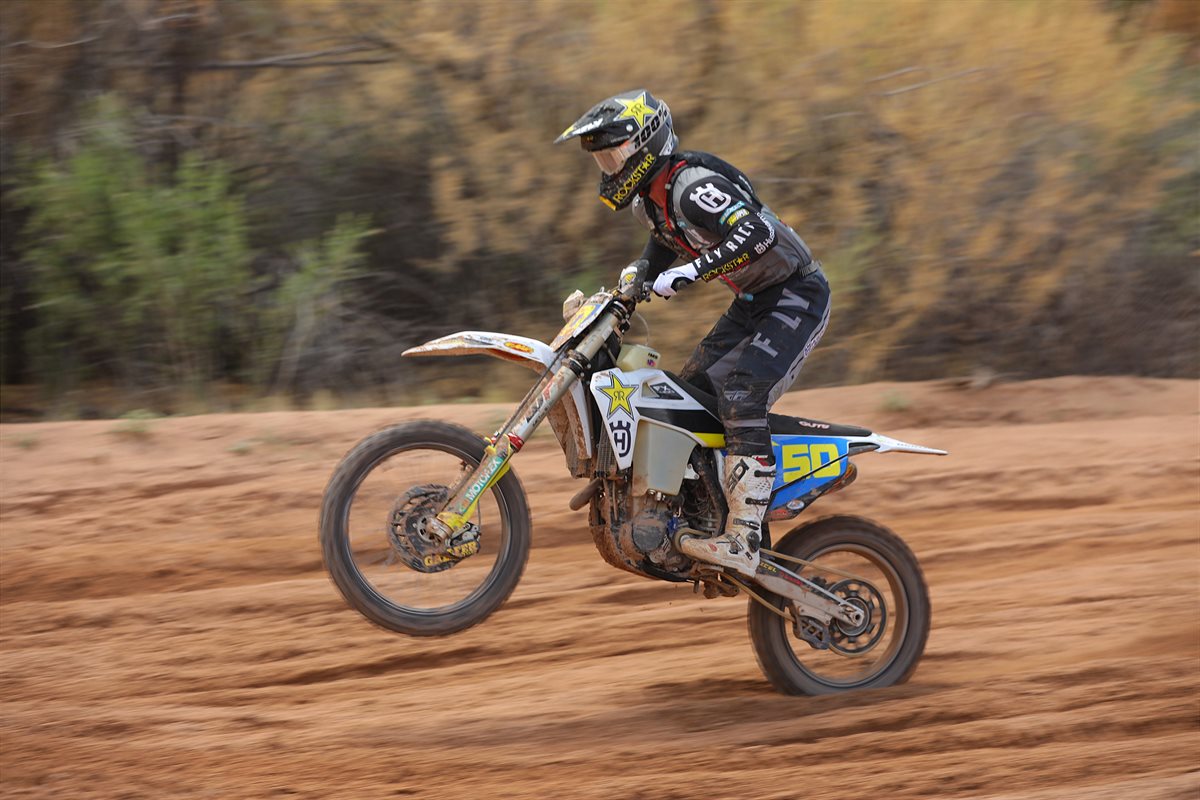 Round 3 of the 2020 World Off-Road Championship Series (WORCS) resumed over the weekend with a scorcher at the Mesquite MX facility in Nevada. Rockstar Energy Husqvarna Factory Racing’s Austin Walton finished sixth-place in the Pro class as he continues to settle into his rookie season in premier division.
Walton got off to a great start as he powered his way into second early on before settling into the fourth-place spot by the end of the opening lap. He ran into some issues with his rear brake that prompted an unplanned pit stop but the crew made a quick replacement and he was able to get back out and going despite losing substantial time. He immediately put his head down and charged from 10th to sixth, where he captured a strong finish just outside the top-five.
Walton: “Everybody was running a faster pace than I expected at the beginning so I let some guys go and ran a pace that I thought would be good for two hours. I ended up running into some brake issues with some stuff getting stuck in there but thankfully we were able to get it changed out in the pits. I had to make up quite a bit of time but other than that, I think my riding performance was good. Sixth place isn’t where we wanted to be but I think we can fix some things and be right there on top.”
Next Round: Wickenburg, Arizona – June 12-14, 2020
Pro (MC) Round 3 Results:
1. Taylor Robert (KTM)
2. Dante Oliveira (KTM)
3. Cole Martinez (HON)
4. Dalton Shirey (HQV)
…
6. Austin Walton (HQV)
Pro (MC) Championship Standings:
1. Taylor Robert, 75 points
2. Dante Oliveira, 55 points
3. Cole Martinez, 53 points
4. Austin Walton, 52 points
About Michael Le Pard 4337 Articles
"Mr. Totalmotorcycle". Owner and Founder of Total Motorcycle. Supporting over Motorcyclists and Motorcycling for 21 great years. Total Motorcycle is my pride and joy and being able to reach out 330 million people has been incredible but I could not have done it without the support of my visitors, readers and members, thank you so much! You are making a difference to millions of riders worldwide. Thank you.
Website Facebook Instagram Twitter YouTube LinkedIn

Desire what you need Yamaha continues to be regarded as one of the most influential and innovative manufacturers in the Sport Scooter segment, having led the way ever since the introduction of the original TMAX. […]