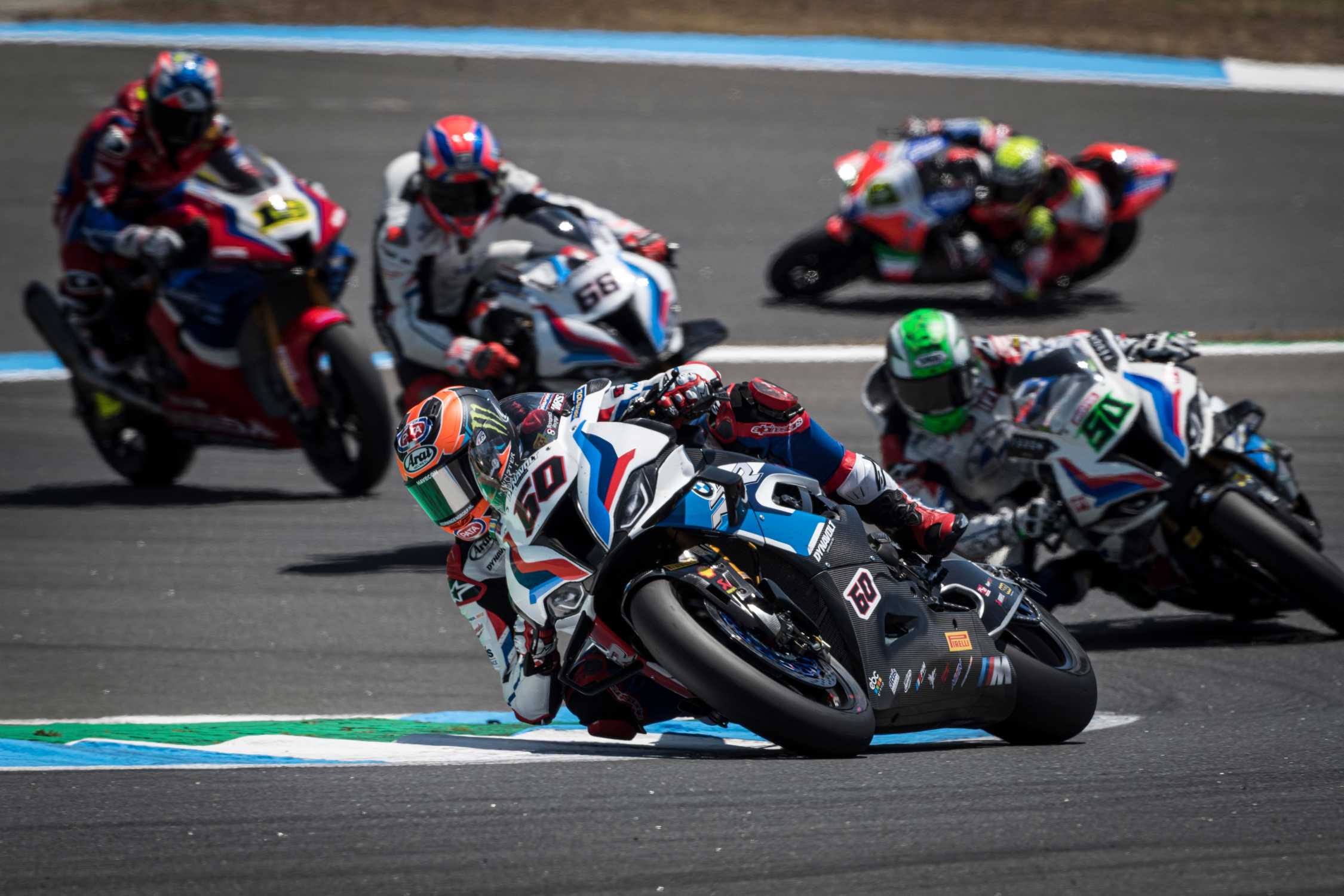 Estoril. BMW Motorrad Motorsport rounded off the second race weekend in the 2021 FIM Superbike World Championship (WorldSBK) in Estoril (POR) with a solid Sunday: three BMW M 1000 RRs were among the top nine to cross the line in the second main race. Michael van der Mark (NED) from the BMW Motorrad WorldSBK Team rode his way up from 14th on the grid to finish sixth on his BMW M 1000 RR. His team-mate, Tom Sykes (GBR), finished eighth. Eugene Laverty (IRL), competing for the BMW satellite team RC Squadra Corse, wrapped up a strong Sunday in ninth place. Jonas Folger (GER) from the BMW satellite team Bonovo MGM Racing retired early from the second race due to a technical problem.

Sykes was the best BMW rider in the morning’s Superpole Race, claiming seventh place. Starting from 13th on the grid, Laverty leapt forward from the start and crossed the line in eighth after ten laps. Van der Mark ended the Superpole Race in 13th, while Folger claimed 18th.

In the second race, that featured incidents and falls in the leading group, the BMW riders produced a consistent and error-free performance. As had been the case in Saturday’s first race, van der Mark put on another impressive chasing performance. He started from 14th after the Superpole Race and had already reached the top ten on the second lap. It did not take long for van der Mark to move up to seventh place and he was able to secure sixth spot on lap 15 of 21. Sykes initially fell back from seventh on the grid, but was able to move up again in the second half of the race. He crossed the finishing line in eighth.

Laverty made another great start from eighth on the grid, moving up to fifth. Laverty held third place for a short time after Garrett Gerloff (USA) and Michael Ruben Rinaldi (ITA) retired due to a collision. He slipped back as the race continued, but finished ninth to secure his second top ten result of the day. Folger, however, was forced to end his race on lap three due to a technical problem.

The third round of the WorldSBK 2021 will take place from 11th to 13th June in Misano, Italy.

Reactions after race two at Estoril.

Marc Bongers, BMW Motorrad Motorsport Director: “Three riders in the top nine – finishing off the race weekend with this result is certainly something to be pleased about. It was not an easy weekend. Michael produced a very solid second race after he was unfortunately unable to improve at all in this morning’s Superpole Race. Of course, three other riders did take a tumble, but also under these circumstances it’s all about getting a solid result. He put on a great chasing performance and it was good to see that all the BMWs are pretty close to one another. It was a shame that Jonas had to retire. In general, he had a tough weekend. There are still a few things to work on, specifically about finding the drive out of the corners with little grip in these conditions. But I still think that we did really well. We are satisfied, but now we have to take the next step towards the podium. And I am confident we can achieve that over the next three race weekends in Misano, Donington and Assen. On behalf of the whole of the BMW Motorrad Motorsport family I would like to express my sadness at the death of Jason Dupasquier and send his family and friends our coldolences. This sad news has overshadowed the race today.”

Michael van der Mark, BMW Motorrad WorldSBK Team: “This morning’s warm-up was really good: at least I felt good – I was consistent. Also for the Superpole Race I felt really good, but in warm-up we had changed the bike a little bit. That was good, but as soon as the temperatures went up I struggled a little bit. So the Superpole Race was not that ideal and we even lost two places on the grid. But anyway, in race two the temperatures were much higher than yesterday so we gambled to go for the ‘SC X’ tyre, which was the right choice. The start was a bit messy – I had a good start but in all three races I was a bit unlucky and could not improve my position in the first corner. But at the end I was able to go at quite a consistent pace. I had the chance to follow many riders and I think our bike has made a huge improvement, especially over a race distance and when it comes to conserving the tyre. We just need to find a little bit more drive out of the corners and that should be our next big step to improve on the bike.”

Tom Sykes, BMW Motorrad WorldSBK Team: “The bike was much better today than yesterday. We made a small change and really felt a big improvement on the bike. And again, just struggling, such a shame when fighting for track position. For whatever reason, at the moment we lose track positions to some other riders. The BMW M 1000 RR is certainly strong in some sectors of the track and we are just getting an understanding why. Unfortunately, I got stuck behind some other riders and that gave us an issue today with the braking system. Once I got a clear track, I picked up a lot more speed and found a much better rhythm. Obviously I am not happy with the result but, considering where we were yesterday, it’s a big, big improvement. We definitely learnt a lot on this Sunday afternoon in Estoril and now we need to keep improving.”

Eugene Laverty, RC Squadra Corse: “It has been a bitter-sweet day, because my speed is there and, honestly, this year the BMW M 1000 RR is such a huge step forward. The Aragón race weekend was my first proper ride on this new bike, so I am still understanding how to get the most from it. This weekend, wow, the bike was fantastic, and in the final race I felt so good to fight with these guys in the first laps and to get up into third position. But in this heat I had to take care of the brakes, so I had to let the other riders’ go and ride in clear air to cool the brakes. Now we will be 100 per cent ready in Misano. These first two rounds have more been like a test, and from Misano on we will start the season properly.”

Jonas Folger, Bonovo MGM Racing: “Unfortunately, also today did not go as we had hoped. We had a difficult weekend. That said, things did look a bit better in the final race, even if it did only last for two laps. But we would have made it into the points if everything had gone right. Unfortunately, we had a technical problem. Now we have to look ahead, use the short break and then go back on the attack in Misano.”