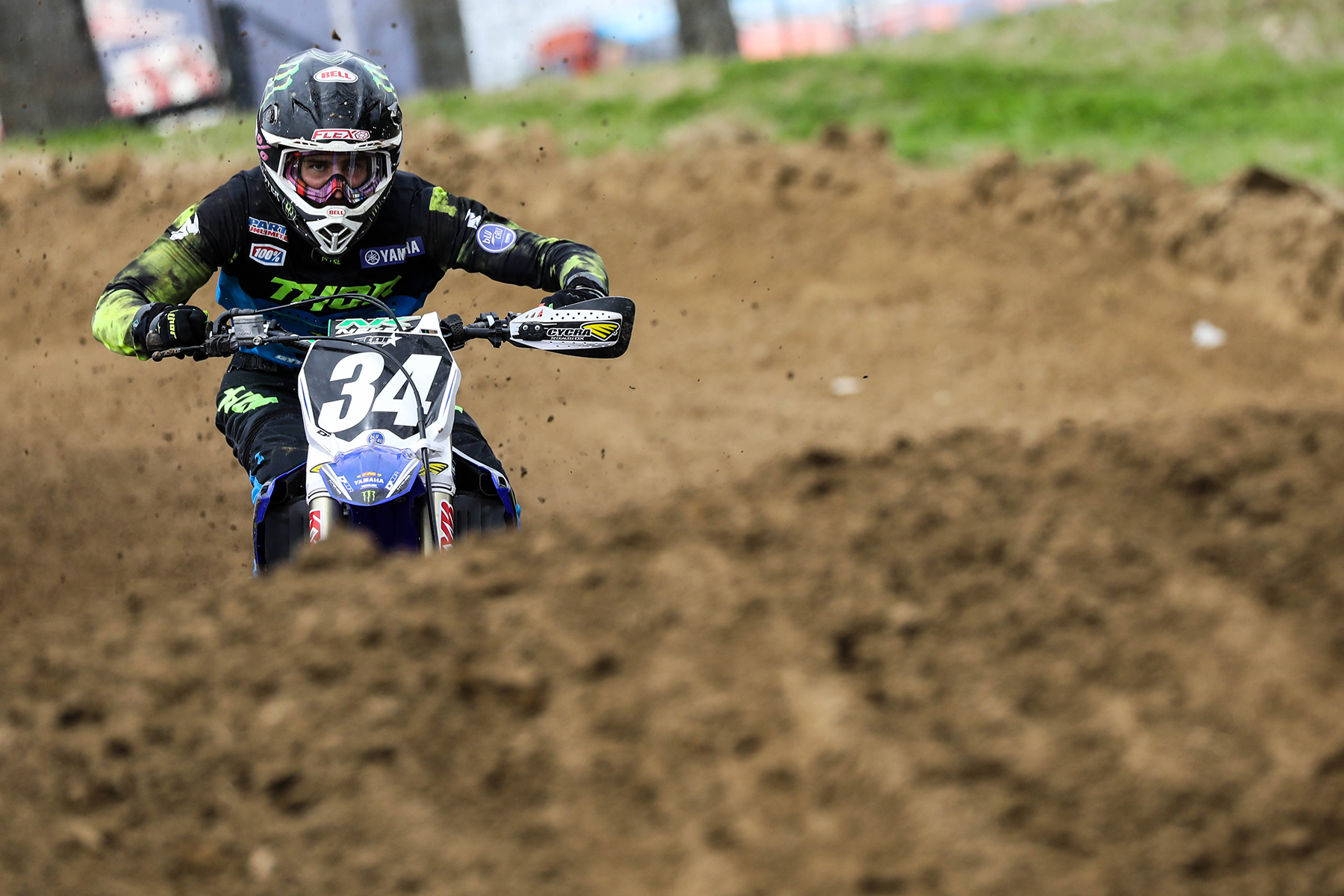 There aren’t too many riders that really stick out from the crowd or find a way to separate themselves from the rest of the pack in the sport of amateur motocross, but that’s exactly what Jarrett Frye has done since joining the Star Racing Yamaha program at the beginning of the 2019 season.

The Maryland native’s success with bLU cRU may be a revelation to some, but he’s shown loads of potential throughout the last few seasons that is finally coming to fruition with the right bike beneath him and the right support system in his corner. He has managed a handful of overall podium finishes at the Loretta Lynn Amateur National Motocross Championship in past years, predominantly on minibikes but he hasn’t been able to achieve the same level of success since his graduation to big bikes. Nonetheless, the teenager has proven himself the past two year’s running against some of the nation’s best at the Thor Winter Olympics as he’s captured a plethora of overall victories in both supercross and motocross. The teenager has done more than enough to prove he’s capable in both disciplines as he demonstrated his elite riding skills yet again at the beginning of the 2019 season, dominating the B class aboard his Star Racing backed YZ250F at both the Ricky Carmichael Daytona Amateur Supercross and the JS7 Freestone Spring Championship.

Frye really managed to find his form throughout the regular spring events at the beginning of the season, stepping up his game in his second year in the B class. His first stop was at the Daytona RCSX during the world famous Bike Week at the beginning of March and it couldn’t have started any better. The Star Racing Yamaha rider put together a perfect weekend in the Florida sunshine, going unbeaten in all three of the classes that he entered. He swept his heat races on Sunday with a trio of effortless first place finishes and repeated the same feat on Monday with another handful of victories, taking an early command of the B class against some stiff competition at The World Center of Racing. Frye’s incredibly smooth and calculated riding style works well with the YZ250F as he seemingly floats around the track in an effortless fashion, expending his energy deliberately and efficiently. A week later at the JS7 Freestone Spring Championship, Frye brought the same speed and intensity to the Texas soil as he snagged two additional number one plates, winning five out of six motos in the process. A ninth place in the first moto of the Schoolboy 2 (12-17) B/C class hindered his overall result and put a blemish on his perfect record, but he demonstrated the resilience and determination to bounce back from a tough moto and win the second moto regardless, salvaging a fifth place overall.

It’s been an immensely positive start to the season for Star Racing Yamaha’s new up-and-comer and he’s been turning some heads on any given day in Southern California just the same as he’s done at the various high-profile amateur races that he’s attended. There’s been word from one of the Superbike riders in the MotoAmerica paddock that he was out at one of the typical Southern California practice tracks earlier in the year and saw a Star Racing Yamaha bike with the number thirty-four emblazoned on the plastics and he immediately assumed it was Dylan Ferrandis due to the ferocity and speed that he demonstrated on the track, but he came to find out it was actually B class sensation, Jarrett Frye. The Maryland native has credited his time spent training with Gareth Swanepoel and the opportunity to mirror the professional rider’s training regimen as one of the reasons why he’s been able to step it up this year and he currently shows no signs of slowing down. It’s not at all surprising that his speed warranted some confusion because it seems as though he’d fit right in on the gate of a 250SX West main event or on the gate of a Lucas Oil Pro Motocross National. At this rate, it won’t be long until Frye is mixing it up in a racing environment with his Star Racing Yamaha teammates as the Maryland native is slated to make his professional debut at Hangtown in 2020. How did the whole opportunity with Star Racing Yamaha come about?

Pretty much at Mini O’s, I was winning and they came up and wanted to give me an opportunity for 2019 and I couldn’t really pass it up. I think most of my championships are at Mini O’s, I like the track and I always seem to be more prepared coming into it than some of the other races, so it’s good to see that my hard work there is paying off.

What were your first impressions of the YZ250F after riding it for the first time?

The bike’s honestly unreal; it’s super fast and it handles well, so I’m liking it. They’ve definitely got the fastest bike out there. We did a little bit of testing before Daytona but we actually ended up going with the setup that we started with really, because the bike is just that good.

How have the resources of a team like Star Racing changed your training program and preparation this year?

Yeah, I’m actually training with Gareth Swanepoel now and it’s been good. It’s something new and it’s good to ride with the pros out here as well. We normally start in the morning with a twenty-minute run and do a little bit of yoga, go to the track and get our motos in for the day (long motos or sprints), and then the gym after that. How has it been working with Will Hahn and having him in your corner?

Yeah, he’s been pretty good. He actually raced Freestone to help us out with the track and some lines and stuff like that. The motos didn’t really work out because the B class was before him but I mean he still helped us out in practice with a couple of different lines and stuff like that. He’s at the test track every day helping — telling us what we need to better, and helping us with starts or whatever it is, so he’s a big part of the program.

Have you had the chance to ride/train with some of the 250SX Star Racing riders since you’ve been out in California?

Yeah, when they’re on the outdoor track I do pretty much the same thing and then we do the same thing in the gym as well. So, I’m pretty much on the same program as those guys — training with them and seeing how fast they are on the track, trying to be as fast as them really pushes me every day to get better and it’s helping my confidence knowing that I have the same program as some of the top guys in the 250 class. Riding with them every day definitely helps a lot.

Are you still planning on spending time back at MTF (Millsaps Training Facility) or are you making an early transition to the west coast?

Yeah, I think right now I’m just going to be on the west coast right now with the team so I can be out here riding with the pros and doing the professional program that they have going. It’s not too bad in California, the traffic sucks but I’ve been liking the tracks and training. It’s paid off this year so far so I’m excited to keep it going and see where it takes me. The Daytona RCSX and JS7 Freestone Spring Championship went incredibly well for you. Could you walk us through those races from your perspective?

Yeah, I won every single moto at Daytona and came away with three championships between 250 B, 450 B, and Schoolboy 2. At Freestone, I won five out of six races and two of the three championships, so this year’s been going really good so far and I’m going to do my best to keep it up. Freestone is always super gnarly and we had the last moto of the day in the B class, so it was even more gnarly plus the sun was going down, so it was hard to see out there and made it even tougher. Riding on some of the rough tracks out in California definitely prepared me for those late motos when the track was rough though, so it’s good to see that my training is paying off. I liked the twenty-minute motos that we had because I’ve been doing thirty-five-minute motos out here with the the pros, so twenty minutes isn’t too bad.

Did the thirty-five-minute motos take some getting used to when you first started doing those regularly?

Yeah, I’ve done thirty-minute motos a lot at MTF, but it’s not too much of a difference. It’s pretty cool to be out here on the same tracks that the pros are practicing on though, so that’s the biggest difference but it’s good.

Have you given any thought to your plans for this season and what you’ll be doing after Loretta’s?

Yeah, right now the plan is to stay in the B class through Loretta’s and then go up to the A class for Mini O’s and Freestone, then I’ll make my pro debut at Hangtown in 2020.