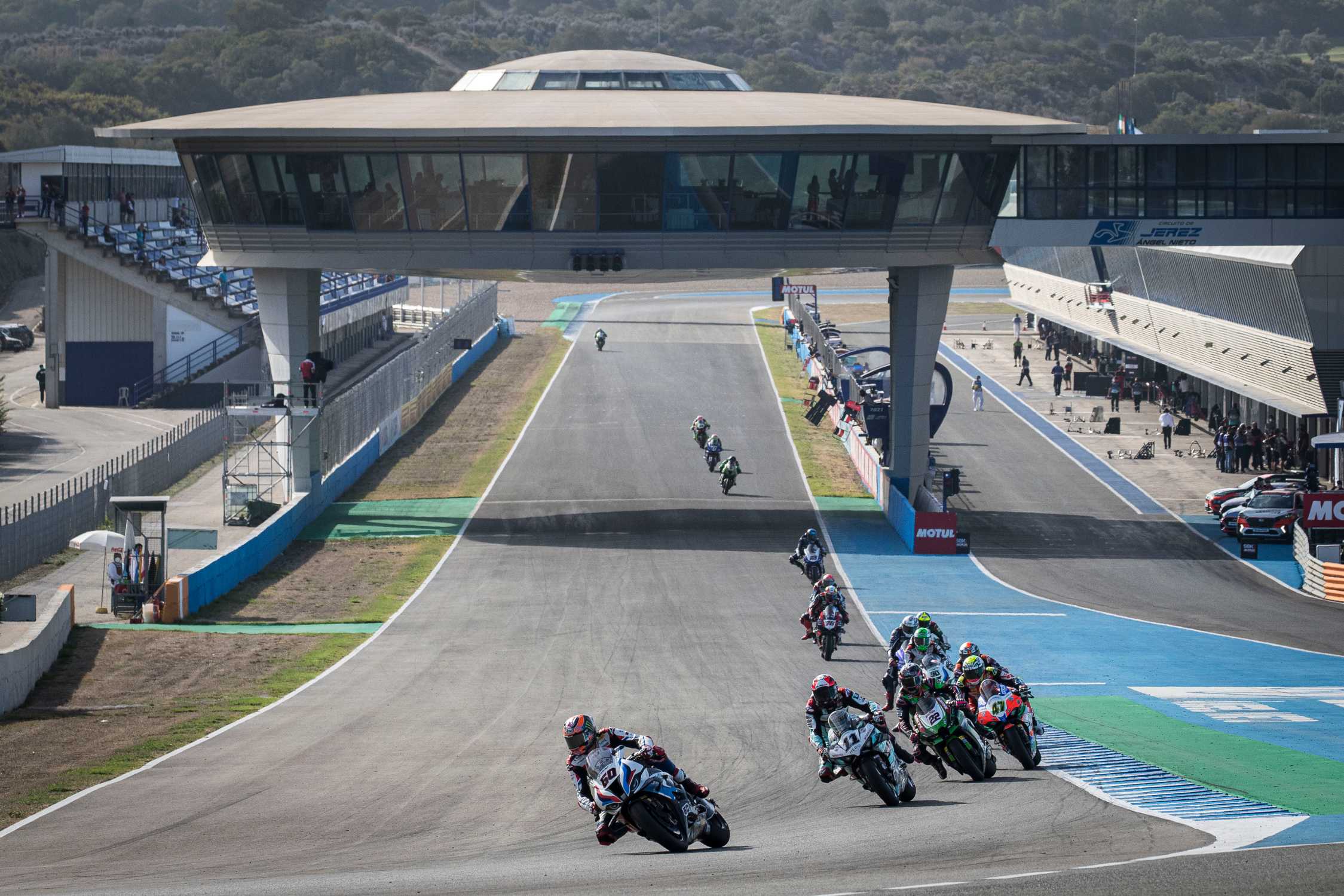 Jerez de la Frontera. The tenth race weekend of the 2021 FIM Superbike World Championship (WorldSBK) in Jerez de la Frontera (ESP) was overshadowed by a fatal accident involving Spain’s Dean Berta Viñales . The young rider crashed in Saturday’s Supersport 300 race. The thoughts of BMW Motorrad Motorsport are with Viñales’ family, friends and team. We would like to offer them our sincere condolences.

After the tragic accident, all the remaining races scheduled for Saturday were cancelled. In consultation with Viñales’ family, it was decided to continue the race weekend on Sunday and to stage the races in memory of the young rider. On Sunday morning, the paddock paid its respects with a minute’s silence. Sunday’s itinerary was amended to feature two 20-lap WorldSBK races.

Michael van der Mark (NED) from the BMW Motorrad WorldSBK Team ended race one in seventh place. He then finished eighth in race two. Deputizing for Van der Mark’s team-mate, Tom Sykes (GBR), in Jerez de la Frontera was Eugene Laverty (IRL). In light of the injury that Sykes suffered last Sunday in Barcelona, the decision was taken for him to sit out the Jerez weekend. Laverty was 12th and 11th in the two races. Jonas Folger (GER) from the Bonovo MGM Racing team finished 14th in race one and crossed the finish line 13th in race two.

Quotes after the races at Jerez de la Frontera.

“Regarding our weekend: I think we do have solid results with seventh and eighth, which I am pleased with. However, the weekend was compromised by a not so good qualifying with all the BMWs starting from the fifth row. So Michael starting from 13th and ending up in seventh and eighth was definitely a solid performance. The gap to the podium was not so big. So we have to work on our qualifying performance and then we can make the next step. Jonas definitely had two of his better races. He was right up there with Eugene. For Eugene, of course, it was difficult to jump on the bike again after missing some rounds. We tried hard to get him a good feeling on the bike, but did not entirely get there. Both of them, Eugene and Jonas, were about 27 to 30 seconds off the win, which is for Jonas definitely one of the best results he has had this year. It is pleasing to see that he is going forward.”

Shaun Muir, Team Principal BMW Motorrad WorldSBK Team: “First of all commiserations to the Viñales family. It was devastating news yesterday. I think the paddock has really pulled together and raced today in memory of Dean. It is sad to be racing under these circumstances.

“Mickey really struggled in qualifying yesterday. It is clear that we couldn’t master the two Qs he had, so starting from that grid position was always going to be a challenge. We did not expect to get to the top eight, but he was seventh and eighth, battling his way through. It is quite clear that when you are coming from so far back you are using the best of your tyre to get into that position, and at the end you have nothing to fight with. He just defended his position. Mickey has had a very strong Sunday. Eugene came back after a longer lay-off, stood in for Tom, and I have to say that he has done a great job. He did two great races. He quickly made up the places that he was able to. He got his head down and really ground through the laps, as we know how he can do in race conditions, and he came away with two strong positions. Now we bring the curtain down on what has been a really difficult weekend for everybody in the WorldSBK paddock and move on to Portugal.”

Michael van der Mark, BMW Motorrad WorldSBK Team: “It was a difficult weekend for the WorldSBK paddock. I want to express my condolences to Dean’s family and friends. Today we raced for him. Our results haven’t been bad when you see where we came from. Yesterday, I had no confidence to go faster so I was a bit disappointing. After a lot of studying the data the guys changed a lot on the bike and already this morning in warm-up I felt a big improvement. Also in both of today’s races I felt a massive step forward. And if you look at our lap times, the consistency and also the gap to the winner and the podium guys, I think we made a solid step. That gives me a lot of confidence and that is what we need. We have tried some things that will for sure be helping in the future.”

Eugene Laverty, BMW Motorrad WorldSBK Team: “First of all, my thoughts are with Dean’s family and friends and I’d like to express my condolences to them. It was a shock for all of us when we heard of the tragic loss of such a young life yesterday. Sporting wise, my objective was to be closer to the front, so I’m disappointed with the race results. We were working all weekend to get the bike to feel more like the bike that I had in the second half of last year and the first half of this year, but it just felt like a different bike under acceleration. Something was amiss in terms of power delivery on corner exit and we didn’t have enough time on track to really get to the bottom of it. I did what I could and a big thank you to BMW Motorrad Motorsport and the BMW Motorrad WorldSBK Team for allowing me to come back for this weekend.”

Jonas Folger, Bonovo MGM Racing: “It was not easy to focus on the job at hand again today. A crash with fatal consequences is not easy to block out. My deepest sympathy goes to the relatives of Dean Berta Viñales. From my own perspective, I am really happy with my races today. The early laps did not go as I hoped, as I was struggling with the new tyres, which lost their grip very quickly and were very erratic. However, after five or six laps I was able to establish my rhythm and could feel the bike better. After race one we knew what we had to do. I battled against good people and could see where the differences were. I then carried a lot of confidence into race two. I again had difficulties with the new tyres in the first few laps, but then rode a great race. I was able to overtake and, towards the end, bridged the gap to Leon Haslam and Eugene Laverty. That showed how much better things were this weekend than they have been. We took a step forward, which is nice to see.”

There are now less than THREE weeks to go until Motorcycle Live 2018 opens its doors – meaning you have less than three weeks left to book your tickets in advance and save £5.50* compared […]