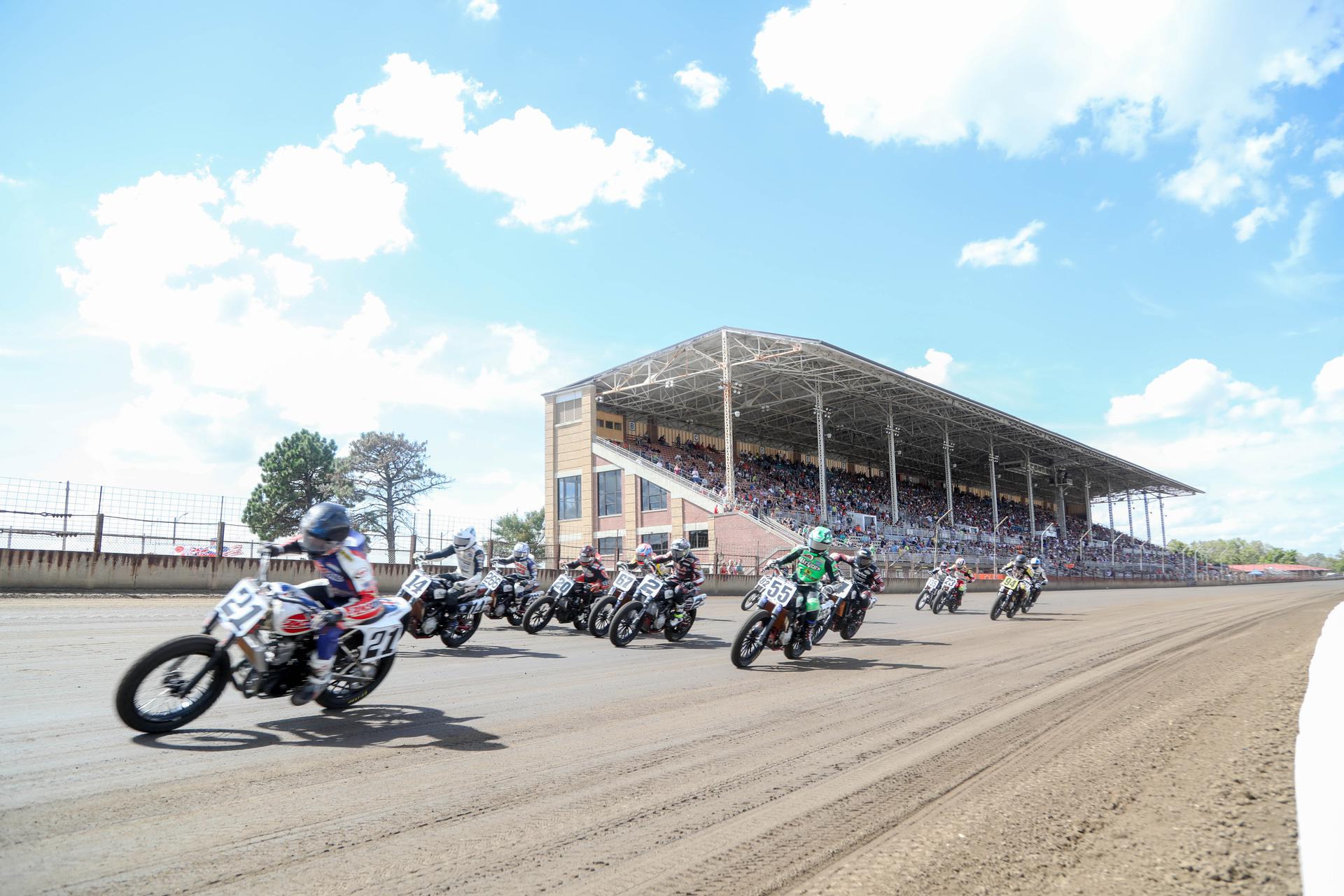 DAYTONA BEACH, Fla. (August 26, 2019) – American Flat Track is set to unleash a dirt track racing extravaganza on the hallowed grounds of the Illinois State Fairgrounds in the form of a Springfield AFT tripleheader this upcoming Labor Day weekend in Springfield, Ill.

Doing so would not only cement both a career and season Grand Slam, it would also place that much more pressure on multi-time defending champion Jared Mees (No. 1 Indian Motorcycle/Progressive Insurance FTR750), who currently trails Bauman by 38 points with just five races remaining in which to make up that ground.

Mees was victorious at the two Miles run thus far in ‘19. He’ll likely need that trend to continue if he hopes to complete the championship threepeat with four of the final five remaining races on the calendar taking place on high-speed Miles. Considering that two of the four Miles are packed into one high-profile weekend, this year’s visit to Springfield has massive championship implications.

The list of potential spoilers is long and decorated, right at the top of that list are Bryan Smith (No. 4 Crosley Brands/Howerton Motorsports Kawasaki Ninja 650) and Jeffrey Carver Jr. (No. 23 Roof-Systems of Dallas/Indian of Metro Milwaukee FTR750).

The savvy Smith has established himself as one of the greatest Mile competitors the sport has ever known, and his next Springfield Mile win will be his tenth in the iconic race. Home-state favorite Carver, meanwhile, aced all his competitors to score a hugely popular win at the venue last season.

The Roof Systems AFT Singles title fight couldn’t be any closer with Dalton Gauthier (No. 122 D&D Cycles/Gobert Smash Husqvarna FC450) and Dan Bromley (No. 1 Red Bull KTM Factory Racing 450 SX-F) equal at 216 points apiece. Both riders have put themselves in their respective positions by running up front consistently, no matter the style of track, but Friday’s Short Track showdown will truly be a matchup of strength versus strength.

Gauthier has taken four short track wins during his career, including two of the three contested this season, while Bromley reigned supreme at the Springfield Short Track in both 2017 and 2018.

In the AFT Production Twins championship outlook, Cory Texter (No. 65 G&G Racing/Holeshot Powersports Yamaha MT-07) maintains a comfortable 27-point advantage. That said, he no longer has a stranglehold on the class in the way he enjoyed earlier this season.

Texter could be primed to return to his winning ways, however, considering he’s shown to be strong enough at the Springfield Mile to podium there even in the premier class.

Not surprisingly, AFT’s Springfield tripleheader will serve as an unofficial celebration of the sport supported by a number of highly anticipated related activities. The on-track action in Springfield will actually kick off on Thursday, August 29, with AMA Amateur Short Track, Vintage National, and Astro Bultaco Invitational racing.

Rookies of ’79 — American Flat Track’s Official Charity — will play a big role during the weekend as well. The Class of ‘79 will host an afterparty following Saturday’s Mile in the Orr Building, while the proceeds of the “Gus Miller Ride the Mile” charity parade lap will go to the Class of ‘79 on Sunday.

Ready to Rumble for Final Round of MotoAmerica 2021

Best ever BSB result for Suzuki at Donington Park