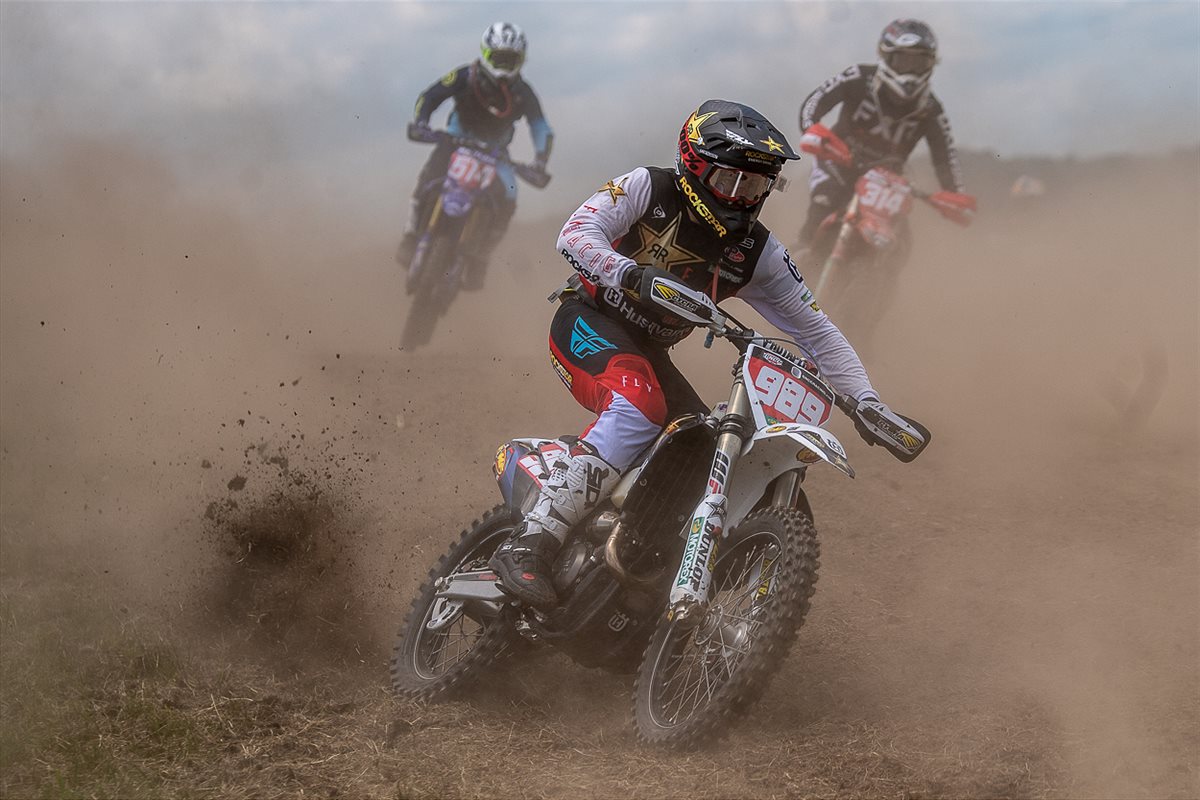 Rockstar Energy Husqvarna Factory Racing’s Craig DeLong earned valuable championship points at Sunday’s Mason-Dixon GNCC with a hard-fought podium finish in the XC2 250 Pro class. Eight rounds into the 2021 Grand National Cross Country (GNCC) Series, the reigning class champion sits in a competitive second-place position in the championship standings.
As the green flag flew for the start of the XC2 250 Pro race, DeLong eagerly jumped off the line and charged into the first turn a little too hard, causing him to go down and start the race in dead last. He was able to make it up to seventh by the end of lap one and he continued to charge into a top-five spot by the second lap. With a steady pace, he made his way into a podium position during the second hour and he determinedly overtook second with two laps to go. He got passed back on the final lap, ultimately capturing third in the class and ninth overall for the day.
“I had a decent start and came in a little too hot and couldn’t slow down, so I was dead last into the woods and I had my work cut out for me,” DeLong said. “I pushed really hard in the first three laps – I got into the second through fifth-place battle and I stayed in that battle pretty much all day. I didn’t quite have it there at the end, I kind of spent myself all day trying to get up to the front, but we still made up some points so that’s a good thing.”
In the XC1 Open Pro class, Trevor Bollinger got off to a great start but a small bobble in the second turn dropped him back to seventh on the opening lap. He fought inside a tight battle around the top-five at the end of lap one and then he went down, dropping back to eighth on lap two. He bounced back and started another charge but he wasn’t able to make up lost time in the last half of the race, ultimately finishing seventh in the class.
“I got a pretty good jump off the start and kind of bobbled a little in the second turn and fell back but I was able to stay with those guys and we were all freight-training around sixth and seventh during the first lap,” Bollinger said. “On the second lap, I had a little tip-over and it put me back about 20 seconds so I kind of lost touch with those guys and rode by myself for the rest of the day.”
Team rider Thad DuVall had a tough day in Pennsylvania after experiencing a bike issue that ultimately ended his day early. After grabbing an eighth-place start, DuVall worked his way into the top-five around the halfway point but he soon ran into a bike issue that dropped him out on lap four.
Next Round: Snowshoe, West Virginia – June 27, 2021
Results: Mason-Dixon GNCC
XC2 250 Pro Class
1. Lyndon Snodgrass (KAW)
2. Ruy Barbosa (HON)
3. Craig DeLong – Rockstar Energy Husqvarna Factory Racing Team
XC1 Open Pro Class
1. Steward Baylor Jr. (YAM)
2. Ben Kelley (KTM)
3. Jordan Ashburn (HQV)
…
7. Trevor Bollinger – Rockstar Energy Husqvarna Factory Racing Team
9. Thad DuVall – Rockstar Energy Husqvarna Factory Racing Team
2021 Championship Standings – After Round 8 of 13
XC2 250 Pro Class Championship Standings
1. Jonathan Girroir – 202 points
2. Craig DeLong – Rockstar Energy Factory Racing Team – 183 points
3. Cody Barnes – 132 points
About Michael Le Pard 5838 Articles
"Mr. Totalmotorcycle". Owner and Founder of Total Motorcycle. Supporting over Motorcyclists and Motorcycling for 21 great years. Total Motorcycle is my pride and joy and being able to reach out 330 million people has been incredible but I could not have done it without the support of my visitors, readers and members, thank you so much! You are making a difference to millions of riders worldwide. Thank you.
Website Facebook Instagram Twitter YouTube LinkedIn

Gagne and Camier Prepare to Fight Back in Race 1

October 26, 2018 Michael Le Pard News Comments Off on Gagne and Camier Prepare to Fight Back in Race 1

A bruising day for the Red Bull Honda WorldSBK Team in Qatar, as both riders look ahead to Superpole and Race 1. Free Practice 1 started as the sun went down over the Losail International […]

The long-awaited first round of the 2021 FIM Enduro World Championship will take place this weekend at Marco de Canaveses in Portugal. With the start of the series pushed back to mid-June due to the […]

Less than a second separated the top 12 riders on the timesheet after a bitterly cold opening day at the TT Circuit Assen. Michael van der Mark ended the day fifth fastest only 0.03 seconds […]