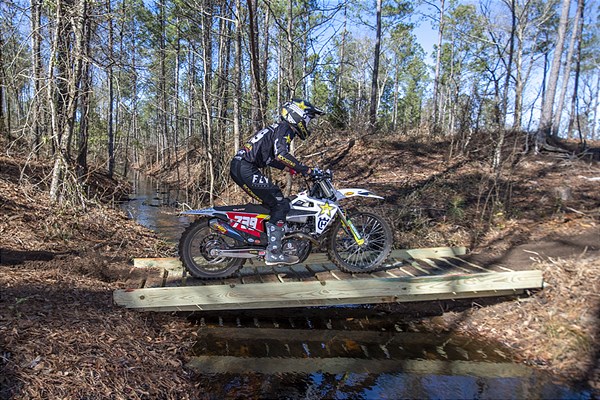 The Rockstar Energy Factory Racing Team had a successful start to the 2020 AMA National Enduro Series with two top-five finishes at the opening round in Wedgefield, South Carolina. Team rider Thad DuVall bounced back from injury with fourth overall, while his teammate Trevor Bollinger rounded out the top-five.
In his first race back from a knee injury, DuVall got started in row 48. In the first test, he finished third as he eased his way back into racing. Test two saw a more wide-open layout, where he struggled to get a flow, ultimately securing a top-five finish. He bounced back in test three to finish third, following it up with a fourth-place finish in test four despite having a crash in that test. He secured a top-five finish test four and rounded out the day with a fourth-place finish in the final test.Hus
Thad DuVall: “It felt awesome to be back racing! This race was a great building block to work off of and I’m excited to get back into the racing groove. My FX 350 worked really well today and I’m excited for the rest of the year.”
Kicking off his first full season in the series, Bollinger came out excited and ready to race at the opening round. In test one, he secured a top-five finish with great speed and he followed it up with a fourth-place finish in test two. In the third test, he experienced a big crash that resulted in him banging up his knee and losing valuable time in the overall running. He muscled through the pain to secure a sixth-place finish in test four, where he was able to maintain sixth overall heading into the final two tests. He put his head down and charged his way to a fourth-place finish in test five, rounding out the day with a fifth-place finish in test six to ultimately secure fifth overall on the day.
Trevor Bollinger: “I’m glad to finally be back racing after a long winter break, it was good to put my Rockstar Energy Factory Racing Husqvarna inside the top five at the first round.”
Sumter National Enduro Results
NE Pro1 Results
1. Ben Kelley (KTM)
2. Steward Baylor Jr. (SHER)
3. Grant Baylor (SHER)
4. Thad DuVall (HQV)
5. Trevor Bollinger (HQV)
Overall Championship Standings
1. Ben Kelley, 30 points
2. Steward Baylor Jr., 25
3. Grant Baylor, 21
4. Thad DuVall, 18
5. Trevor Bollinger, 16
About Michael Le Pard 5042 Articles
"Mr. Totalmotorcycle". Owner and Founder of Total Motorcycle. Supporting over Motorcyclists and Motorcycling for 21 great years. Total Motorcycle is my pride and joy and being able to reach out 330 million people has been incredible but I could not have done it without the support of my visitors, readers and members, thank you so much! You are making a difference to millions of riders worldwide. Thank you.
Website Facebook Instagram Twitter YouTube LinkedIn

BOTH IANNONE AND RINS TO START FROM SECOND ROW

October 27, 2018 Michael Le Pard News Comments Off on BOTH IANNONE AND RINS TO START FROM SECOND ROW

May 24, 2018 Michael Le Pard News Comments Off on Red Bull Honda World Superbike Team aiming to bounce back at Donington