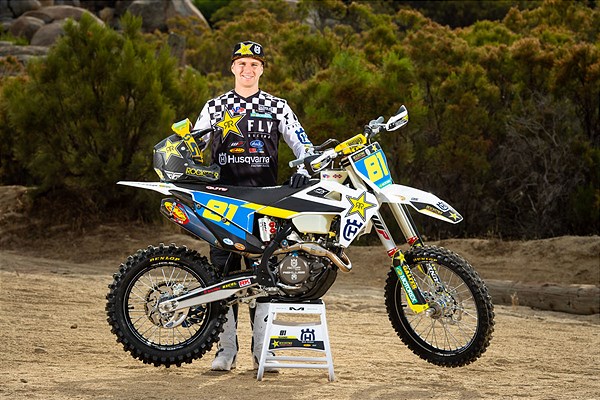 Rockstar Energy Husqvarna Factory Racing’s Giacomo Redondi sustained a broken ankle during a practice crash at a motocross track in Southern California on Friday. As a result, the Italian rider will miss the next several races in the World Offroad Championship Series (WORCS) and National Grand Prix Championship (NGPC).
Redondi’s expected preliminary recovery time is six to eight weeks following Friday’s surgery.
Redondi: “After the first round of WORCS, I was feeling really good and really comfortable on the bike and I was gaining more confidence about my riding style and my speed. I went to the moto track and the feeling was good, the speed was really good and then the crash happened. I’m going to try to make a really good rehab and hoping to not lose too much time but I’m already looking forward to getting back and to try to be on the podium again.”
The 2019 WORCS Champion had a solid start to the season, where he finished third overall at the opening round of the series. The team wishes Giacomo a speedy recovery.
About Michael Le Pard 5181 Articles
"Mr. Totalmotorcycle". Owner and Founder of Total Motorcycle. Supporting over Motorcyclists and Motorcycling for 21 great years. Total Motorcycle is my pride and joy and being able to reach out 330 million people has been incredible but I could not have done it without the support of my visitors, readers and members, thank you so much! You are making a difference to millions of riders worldwide. Thank you.
Website Facebook Instagram Twitter YouTube LinkedIn

Yamaha Riders on the Hunt for Grand Prix Glory in Germany

June 19, 2019 Michael Le Pard News Comments Off on Yamaha Riders on the Hunt for Grand Prix Glory in Germany

SOMETHING ABOUT DUCATI JUST MAKES YOU SMILE. Ducati’s most iconic bike is 25 years old. To celebrate, Ducati has created the Monster 1200 25th Anniversario: a numbered edition limited to only 500 motorcycles. And we have […]

March 31, 2019 Michael Le Pard News Comments Off on Viñales and Rossi to start Argentina rumble from first and second row

Monster Energy Yamaha MotoGP‘s Maverick Viñales and Valentino Rossi continued the positive progress they made yesterday afternoon in all of today‘s MotoGP sessions at the Termas de Río Hondo circuit. The team-mates showed they are […]