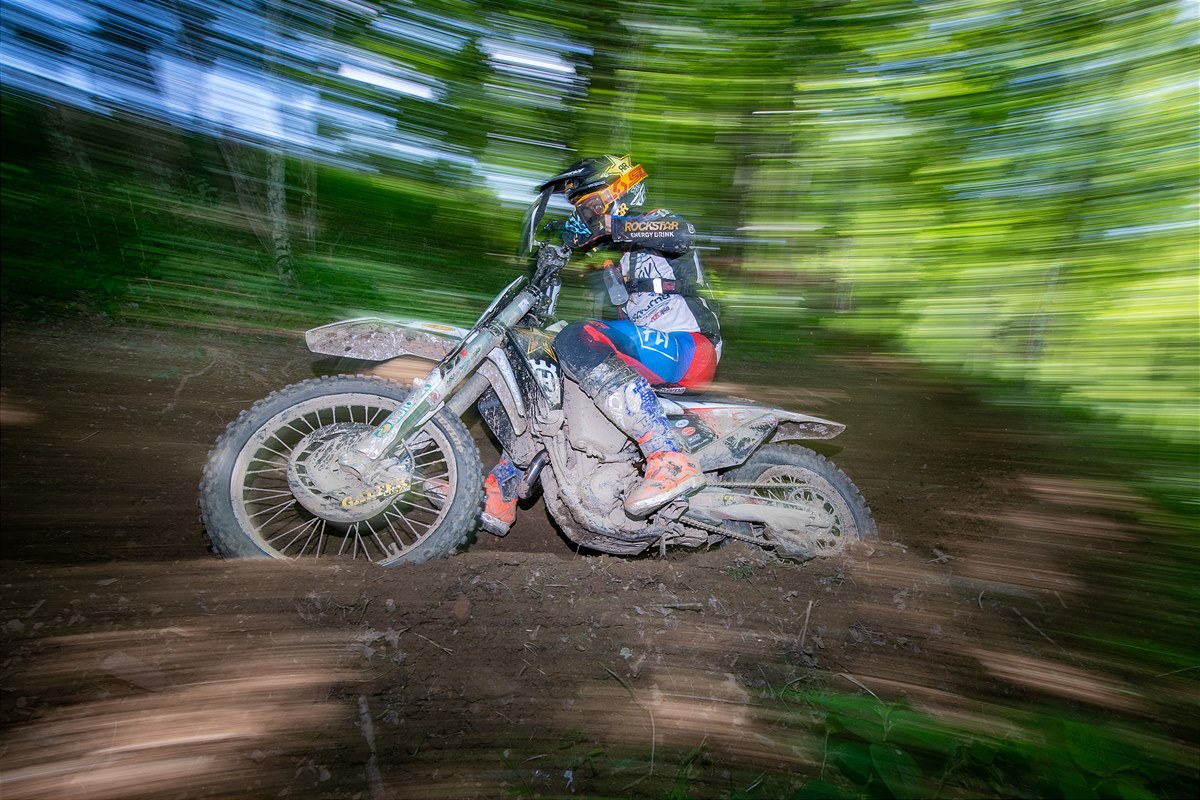 Rockstar Energy Husqvarna Factory Racing’s Craig DeLong put forth an impressive come-from-behind performance to secure fourth overall at the Mason-Dixon GNCC in Mount Morris, Pennsylvania. The eighth round of the Grand National Cross Country (GNCC) Series was on-track to bring Trevor Bollinger a potential first-win this season after leading three of the six laps until a heartbreaking turn of events late in the race, resulting in eighth overall in the keystone state.
Although DeLong was dead last off the start, he jumped into sixth early in the race and ran in the spot until just before the halfway point. He temporarily dropped to seventh before recovering his sixth-place position a lap later. Nearing the end of the three-hour race, he turned up the intensity and moved into the top-five, ultimately catapulting himself into fourth with a last-lap pass on his teammate Bollinger.
“I got a bad start and kind of screwed it up for myself and was dead last,” DeLong said. “I just had to work my way up through the pack and I did it slowly. I kept chipping away and got into fifth and then, I got around Trevor on the last lap. He had an issue, so I ended up fourth – so that was a good day. I never gave up or stopped trying. I felt strong. So that’s a confidence-builder and good momentum for me.”
Teammate Trevor Bollinger got off to an impressive start aboard his FX 350, pulling the holeshot and launching into the lead. He soon found himself in a battle with the eventual race-winner, Ricky Russell, on the second lap. Bollinger and Russell diced for the lead before Bollinger grabbed ahold of it through the middle of the race. With a little more than a lap to go, he got tangled with a lapped rider and smacked his hand in the process. Nursing his hand through the final stretch, Bollinger lost several positions to ultimately cross the line sixth in XC1 Open Pro and eighth overall for the day.
“It was a good day,” Bollinger said. “I actually pulled the holeshot and led the first lap. I fell back to second and was following Ricky, then was able to make the pass again. I led from the third lap to the fifth lap and unfortunately, I got together with a lapper with a little over a lap to go. At first, I thought I just hit my hand a little bit but I couldn’t hold on. My hand kept falling off, so I just tried to manage from there. It’s good to be out front leading all day, and it was a bummer thing but it’s part of racing. We’ll be back as soon as we can.”
Earning his fifth podium result of 2022, Husqvarna Motorcycles-mounted rider Jordan Ashburn scored third overall at Round 8.
Husqvarna Motorcycles-mounted rider Tyla Jones captured her third overall win of the season in the morning race and claimed her fourth WXC class win this year.
Next Round: Snowshoe, West Virginia  – June 26, 2022
Mason-Dixon GNCC Results
XC1 Open Pro Class
1. Ricky Russell (GAS)
2. Grant Baylor (YAM)
3. Jordan Ashburn (HQV)
4. Craig DeLong – Rockstar Energy Husqvarna Factory Racing Team
…
6. Trevor Bollinger – Rockstar Energy Husqvarna Factory Racing Team
Overall Championship Standings
1. Ben Kelley, 180 points
2. Jordan Ashburn, 157 points
3. Trevor Bollinger – Rockstar Energy Husqvarna Factory Racing Team, 138 points
4. Craig DeLong – Rockstar Energy Husqvarna Factory Racing Team, 125 points
About Michael Le Pard 7923 Articles
"Mr. Totalmotorcycle". Owner and Founder of Total Motorcycle. Supporting over Motorcyclists and Motorcycling for 23 great years. Total Motorcycle is my pride and joy and being able to reach out 375 million people has been incredible but I could not have done it without the support of my visitors, readers and members, thank you so much! You are making a difference to millions of riders worldwide. Thank you.
Website Facebook Instagram Twitter YouTube LinkedIn

MORGANTOWN, W.Va. (May 26, 2021) – In conjunction with its broadcast partners, NBC Sports Group and Lucas Oil Productions, MX Sports Pro Racing has announced the broadcast and digital streaming details for the upcoming 2021 […]

SPRINGFIELD, Ill. (November 4, 2019) – Rookies of ’79 and Friends – the Official Charity of American Flat Track – announced today another fundraising effort to aid injured riders and their families. Due to the extreme generosity of Indian Motorcycle, the […]