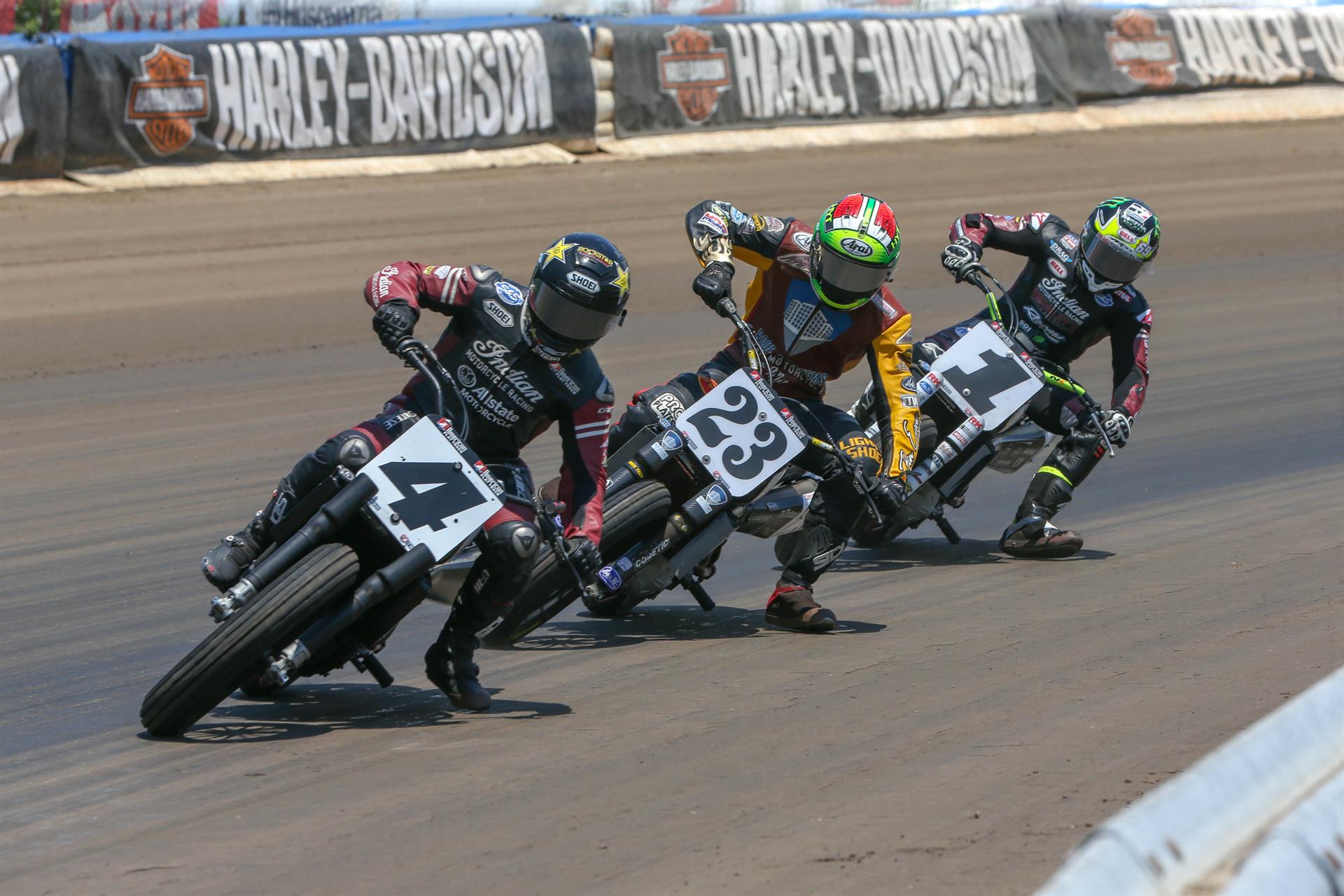 DAYTONA BEACH, Fla. (August 27, 2018) – This Sunday’s Harley-Davidson Springfield Mile II (and Saturday’s Springfield Short Track for AFT Singles) is already one of the biggest, fastest and most anticipated motorcycle events of the year. Records have been set, championships have been won and careers have been forged in this Midwestern crucible of speed.

This Sunday’s event on Sept. 2 is no exception, and here’s why.

First, it’s the 100th running of the ‘world’s fastest mile,’ with racing having commenced at the Illinois State Fairgrounds in 1937. Secondly, nine-time Grand National Champion Scott Parker, with 94 career victories (most all-time) and 14 victories at the Springfield Mile, will be on hand as Grand Marshal. Thirdly, injured AFT Singles rider Parker Norris is scheduled to attend and thank fans and the paddock for the support over the last couple of very trying months.

Of course, Springfield Mile I winner Jeffrey Carver Jr. (No. 23 Roof-Systems of Dallas/Indian of Metro Milwaukee Scout FTR750) would love to play spoiler in the Mees championship scenario. The third-in-points Illinois native has often matched Mees’ speed on ovals this year, and his Springfield win on May 28 was impressive. There’s also second-in-points Wiles to keep an eye on, along with Mees teammate Bryan Smith (No. 4 Indian Motorcycle Racing backed by Allstate Scout FTR750), who ran strong at the Black Hills Half-Mile and who’s consistently fast on the Miles.

Also on Sunday’s ticket is round two of AFT Production Twins, a class that offers up-and-coming AFT Singles riders a chance to race production-based twins. Michael Inderbitzin (No. 54 Weirbach Racing/Kawasaki USA Kawasaki Ninja 650), who came from the back of the pack to win in May, is looking for a repeat, but a host of hungry AFT Singles riders will work to deny him that dual victory.

Those AFT Singles riders will also be looking for a win and valuable points the night before (Sat. Sept. 1) at the Springfield Short Track, and with nine winners in 14 races it’s anyone’s guess who will climb to the top of the box. Dan Bromley (No. 62 KTM North America/Bromley Motorsports 450 SX-F) leads the pack with 243 points, but he’s got a hungry and motivated – and 2016 Singles champ – Ryan Wells (No. 94 RMR/Al Lamb’s Dallas Honda CRF450) just 42 points back.

Friday
•Rookie Class of ’79 – American Flat Track’s Official Charity Partner – is hosting a golf outing to benefit Parker Norris, who was injured back in June but who plans to attend Springfield this weekend. To enter, sign up at http://www.amaft79.com/.
•Rookie Class of ’79 will also host a street party on Friday evening at 5:00 pm at Boone’s Saloon behind the Illinois State Capital. AFT stars will be there to sign autographs, and there will be memorabilia sales and special auction items to help injured riders.
•Amateur Short Track racing commences on Friday, including the AMA Vintage National Championship. Practice at 3 pm, racing at 5 pm. It’s the perfect warm-up for Saturday’s and Sunday’s heated pro competition.
•Shayna Texter autograph signing at Hall’s Husqvarna (3801 N Dirksen Parkway) Friday evening from 5:30 – 6:30 pm.

Tickets for the Springfield Short Track are $20 and available at https://www.springfieldmile.org/Tabs/Events/EventList.aspx

Gates for Sunday’s Harley-Davidson Springfield Mile II open at 9:00 am CT, with practice and qualifying starting at 10:00 am CT. An autograph signing/open-paddock fan walk is scheduled for 12:00 pm CT, with racing beginning at 1:30 pm CT. Main Events are scheduled for 3:00 pm CT (AFT Production Twins) and 3:30 pm CT (AFT Twins).

Continuing their battles in the Peruvian countryside for a fourth consecutive day, Adrien Van Beveren and Xavier de Soultrait have both enjoyed strong performances during Thursday’s stage four of the Dakar Rally. Reaching the halfway […]

Last year Mihai and his family took their Gear Up on an epic 4 month European tour.  This summer he’s back on the road exploring Central Asia. Mihai has perfected his Gear Up for long […]