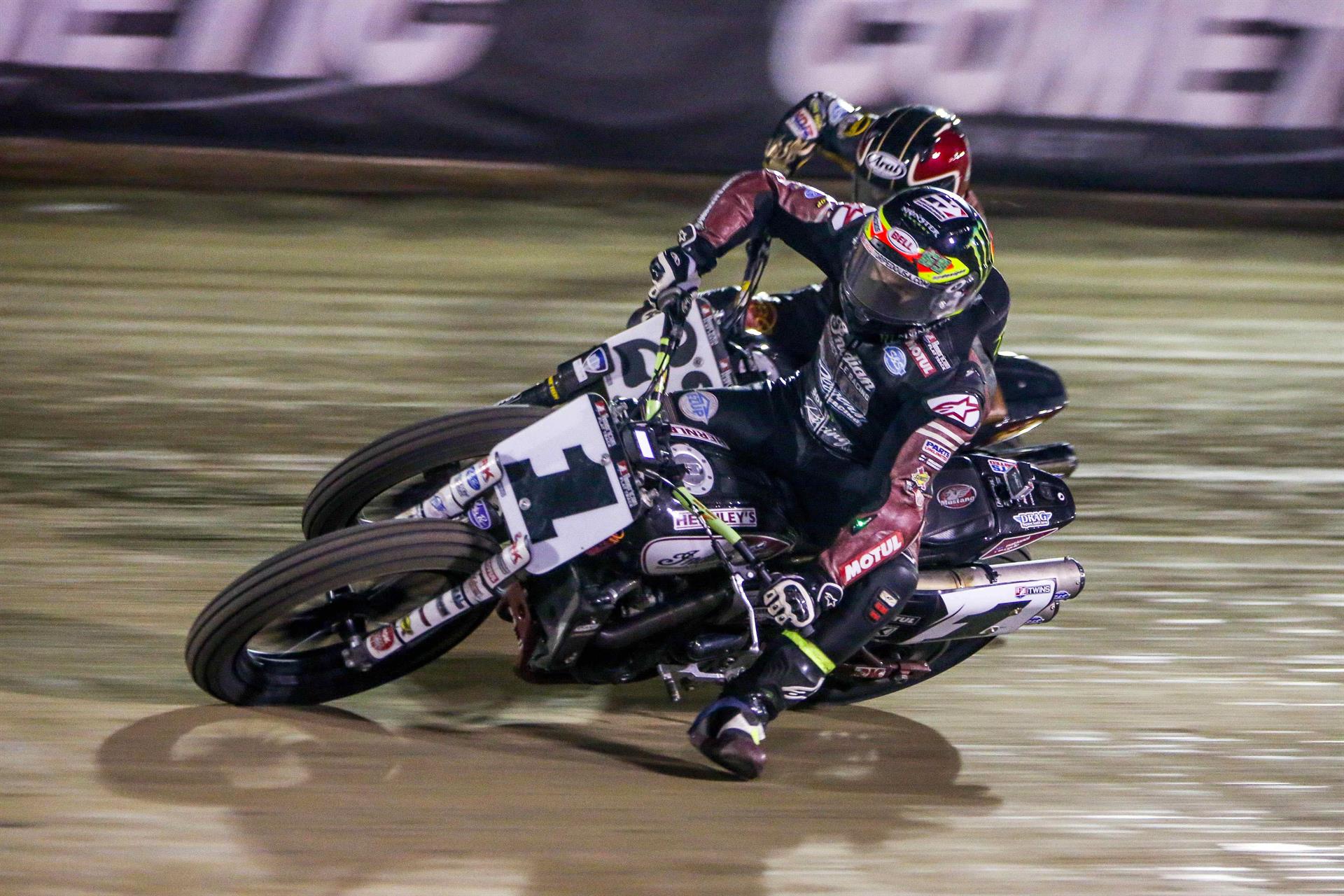 The AFT Twins presented by Vance & Hines victory didn’t come easily, however, ranking as perhaps Mees’ most hard-fought and hard-earned of the season. It was ultimately taken by a scant 0.032 seconds following an epic heavyweight battle with Jeffrey Carver Jr. (No. 23 Roof-Systems of Dallas/Indian of Metro Milwaukee Scout FTR750), one of just two riders to have beaten Mees straight up in 2018.

The pair threw everything they had at one another over the course of 25 laps, utilizing multiple lines, creative overtakes and an abundance of aggression. Mees established control of the lead over the final handful of laps and managed to just hold Carver at bay despite one final strike that fell a half-a-bike-length short at the checkered flag.

The win was Mees’ 10th in 13 races this season. With five races remaining on the season slate, he’s already equaled the tally that carried him to a lopsided championship win in 2017. It also stood as the 26th Half-Mile victory of his career, moving him into a tie with Will Davis for second most in AFT history.

After winning his dogfight with Carver, Mees said, “Oh man, it was a fantastic race… I didn’t feel the strongest earlier on, but during the Heat and Semi we showed some good speed. I knew the Main was going to be tough. Carver is always fast, but he seemed to struggle a little in the Semi, so I was expecting to battle with some other guys in the Main. But Carver got a good start and he was riding so good. It was everything I could do pull the win off today. It felt good. To win ’em this close is awesome.”

Former champion Bryan Smith (No. 4 Indian Motorcycle Racing backed by Allstate Scout FTR750) rounded out the podium in third, marking a superb return to action after sitting out Sunday’s Buffalo Chip TT while still on the mend from injury.

Earlier in the evening, 2015 AFT Singles champion Davis Fisher looked like a strong bet to finally bag his first career AFT Twins podium and perhaps even contend for the win… that is, prior to suffering a spectacular crash while attempting a huge celebratory wheelie moments after winning Semi 2. His No. 67 Double D Performance/Bob Lanphere/RMR Indian Scout FTR750 flipped over backwards, causing massive damage to the machine and leaving Fisher and crew scrambling ahead of the Main. He managed to regroup well enough to finish a memorable evening with a seventh-place performance in the Main.

Mees is rapidly closing in on a second consecutive Grand National Championship. Thanks to racking up a quick 45 points in this year’s 78th Annual Sturgis Motorcycle Rally doubleheader, he now leads Henry Wiles (No. 17 Bandit Industries/Wilco Racing/Willy Built Indian Scout FTR750) by 102 points with just 125 points left in play.

Shayna Texter (No. 52 Husqvarna Motorcycles/JCS Racing FC 450), who’s scored the most wins in AFT Singles history, added yet another victory to her scorecard on Tuesday evening.

Texter, who claimed Husqvarna’s first-ever American Flat Track win earlier this season, added a second victory with a smooth and calculated performance at Black Hills Speedway. Unlike last year’s 15 laps of fury at the venue in which seven AFT Singles contenders finished within a second of the win, Texter and 2016 class champ Ryan Wells (No. 94 RMR/Al Lamb’s Dallas Honda CRF450) quickly turned this year’s edition into a two-rider showdown at the front. And with five laps to go, Texter transformed it into a solo affair with a late escape to take the checkered flag first for the 13th time in her AFT Singles career.

The triumph was well-timed for Texter, who was in need of a top performance after failing to advance out of the heat races in Sunday’s Buffalo Chip TT.

“The Buffalo Chip was a little bit of a struggle for me,” Texter said, “but I came out swinging today. Hats off to my entire team, Husqvarna Motorcycles, Roof Systems of Dallas, Texas, Parts Unlimited, and all the fans who came out tonight. I really appreciate your support. I want to send a special shout out to Parker Norris and Brad Baker. I know you guys are watching, and we can’t wait until you get back out here.”

Wells came home clear in second, while title leader Dan Bromley (No. 62 KTM North America/Bromley Motorsports 450 SX-F) aced the winner’s brother Cory Texter (No. 65 CTR/Law Tigers Honda CRF450R) on the final lap to notch his 10th podium of the season. As a result of his consistent excellence, Bromley boasts a 49-point advantage over second-ranked Wells (230-181), with Texter third at 164.

Flat frack fans will not want to miss the Saturday evening primetime premier of the Buffalo Chip TT presented by Indian Motorcycle on NBCSN at 8:30 pm ET (5:30 pm PT) on Saturday, August 11. Then, just a week later, on August 18 at 5:00 pm ET (2:00 pm PT), catch all the action from tonight’s Black Hills Half-Mile on NBCSN, featuring flag-to-flag coverage of both Main Events enhanced by drone and onboard footage.

Honda Endurance Racing targeting success at the 8 Hours of Oschersleben

The Honda Endurance Racing team is heading to Germany for the fourth round of the 2018/2019 FIM Endurance World Championship, the 8 Hours of Oschersleben. Randy de Puniet, Sébastien Gimbert and Yonny Hernandez are […]