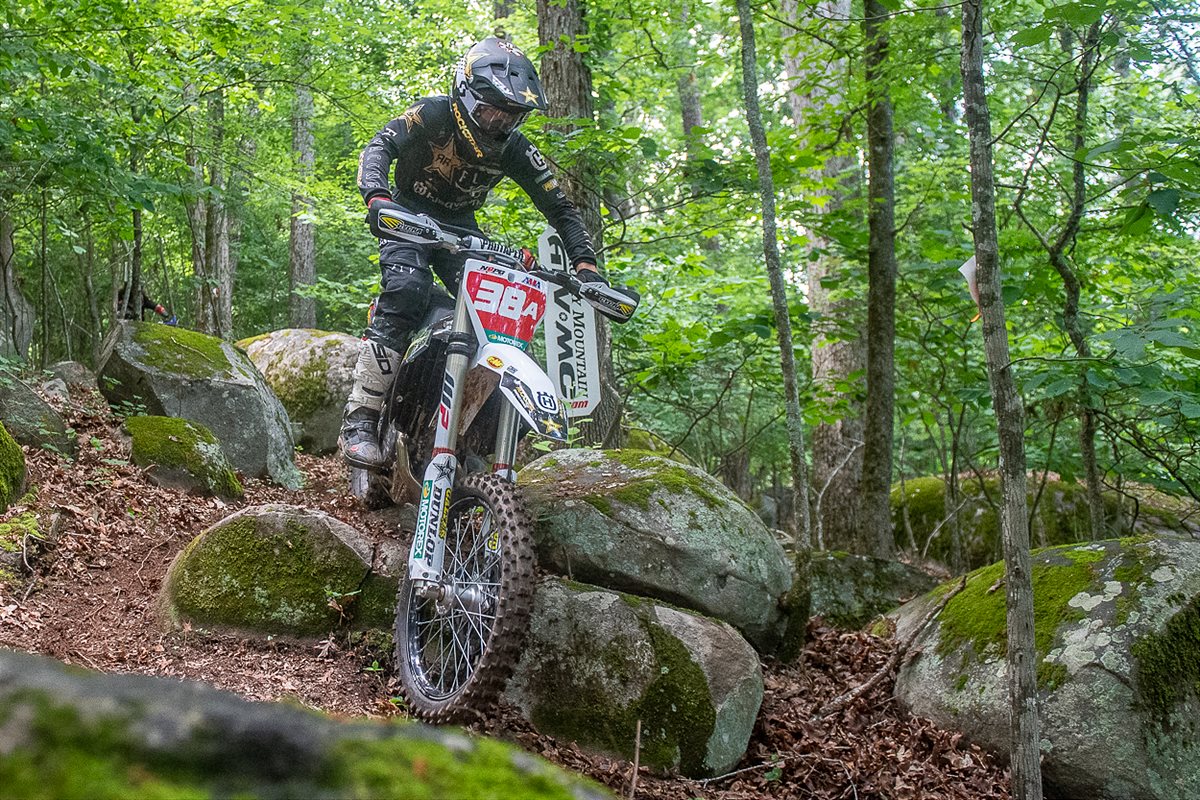 It was a steady day for Rockstar Energy Husqvarna Factory Racing’s Trevor Bollinger, who finished just off the overall podium in fourth at Round 4 of the 2021 AMA National Enduro Series in Greensboro, Georgia. In addition to Bollinger’s season-best performance, teammate Craig DeLong battled his way to a sixth-place finish in his rookie season of NE Pro1 competition.
The Cherokee National Enduro saw some rainfall before Sunday’s racing, which made for ideal track conditions throughout the day. Bollinger, who is still racing his way back from injury, put forth a strong effort throughout all seven tests but it was the final section that really elevated his overall finish. He put himself in a favorable position to capitalize on some things late in the race, grabbing fourth and fifth-place finishes in the last two tests. With a strong ending to the day, Bollinger was able to overtake fourth overall.
Trevor Bollinger: “It was a good day; we were feeling better on the bike. It’s a broken record but with all the injuries I’ve had, it’s taken me a while to get back to this. I liked this track, there were a few sections where it was pretty tight for my liking but the rest of it was pretty good and I felt like I rode good all day. I didn’t make many mistakes and I only fell over once, so I was pretty happy on the day.”
DeLong came out strong in the first test of the day, finishing with a top-five in the class. He struggled to find the right settings for the tight single-track but he was able to bounce back with four top-five finishes in the last five tests. With a steady performance all day, DeLong found himself just outside the top-five at the end of the day with sixth overall.
Craig DeLong: “My suspension was maybe a little bit off about halfway through the day and it took me a while to figure out what I wanted to do and I eventually adjusted it for the better in the last two or three tests. I wish I would have started the day with that setting but you learn new stuff every time. I’m happy, I had some decent times and got out of here healthy. The next one is one of my local rounds, so I’m excited for that.”
Next: Round 5 – July 25 – Cross Fork, Pennsylvania
Cherokee National Results
NE Pro1 Results
1. Josh Toth (KTM)
2. Steward Baylor Jr. (YAM)
3. Grant Baylor (GAS)
4. Trevor Bollinger – Rockstar Energy Husqvarna Factory Racing
…
6. Craig DeLong – Rockstar Energy Husqvarna Factory Racing
7. Evan Smith (HQV)
About Michael Le Pard 8449 Articles
"Mr. Totalmotorcycle". Owner and Founder of Total Motorcycle. Supporting over Motorcyclists and Motorcycling for 23 great years. Total Motorcycle is my pride and joy and being able to reach out 375 million people has been incredible but I could not have done it without the support of my visitors, readers and members, thank you so much! You are making a difference to millions of riders worldwide. Thank you.
Website Facebook Instagram Twitter YouTube LinkedIn

Movistar Yamaha MotoGP’s Maverick Viñales and Valentino Rossi kicked off the first of the overseas triple-header weekends today with a dry FP1 session and a wet FP2. They secured fifth and ninth place respectively in […]