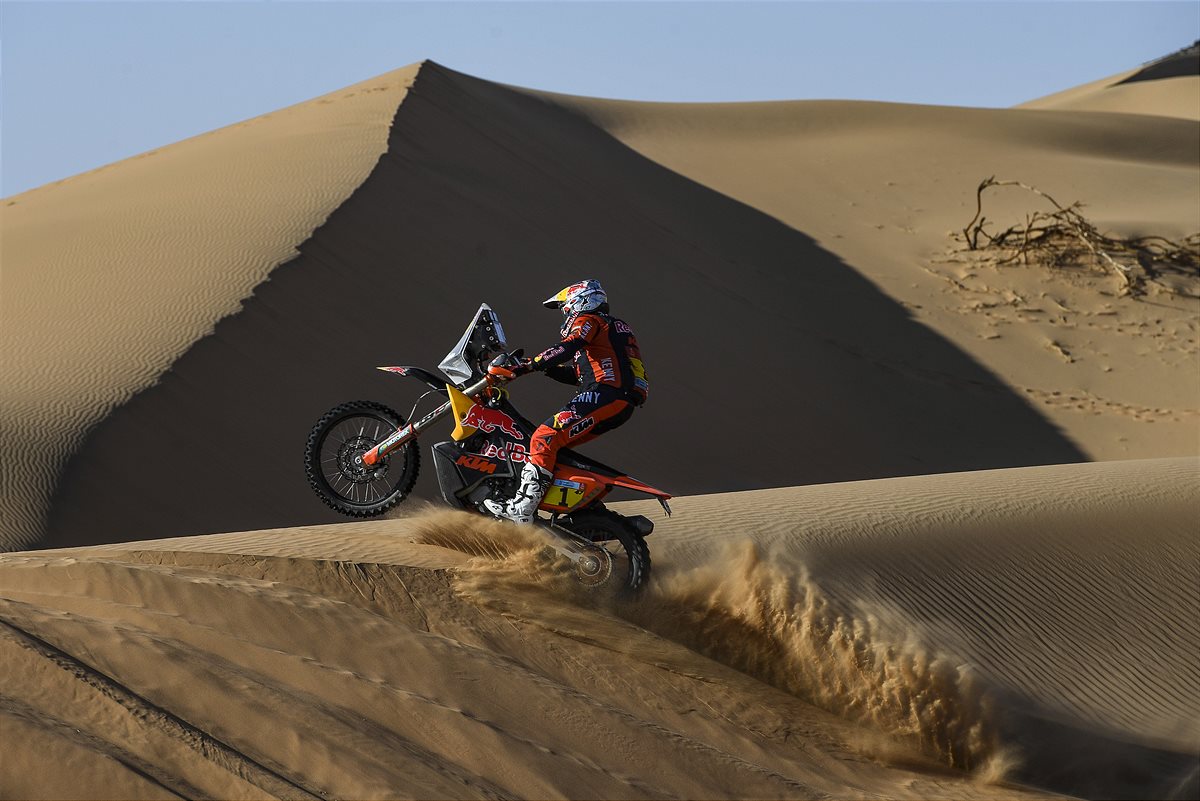 Lying third going in the final day of racing, Matthias Walkner put in a superb performance on today’s stage to finish seventh fastest and secure his overall podium result. After covering more than 8,000 kilometers, the top three motorcycle class finishers were separated by just under seven minutes, such was the closeness of competition at this year’s event. Walkner’s third-place finish is the Austrian’s fourth Dakar podium, as he adds the hard-fought result to his 2021 FIM Cross-Country Rallies World Championship title, in what has been an incredible 12 months of racing for the experienced 35-year-old.

Matthias Walkner: “I feel super happy and also lucky to be here healthy at the finish line. It feels great to be back on the podium too after a couple of difficult Dakars the past two years. It’s been a super long and hard Dakar as always, but this year has been special because of the level of navigation needed every day. We saw right from the first day that you can win or lose so much time on each stage. Because of that I really tried to focus on my roadbook, and concentrate on my navigation for the whole race. The first week went really well for me, and then into the second week, everyone was pushing really hard, so you had to give your best every day as the times were so close. The new bike has been brilliant, and the team have put so much effort into making sure we had the performance needed to finish on the podium, so thank you to them. Now it’s time to celebrate!”

Following a tough start to this year’s event when a navigation issue on stage one cost him a considerable amount of time, Toby Price delivered day after day of solid results to fight his way back into the top-10 overall. Placing as second quickest on the final day of racing, together with his stage win on day 10, shows that the two-time Dakar Champion has lost none of his speed or motivation. Happy to safely complete the 2022 event without injury, Price now looks ahead to the remainder of this year’s FIM World Rally-Raid Championship.

Toby Price: “I’m always happy to reach the finish here at the Dakar, it’s been a really tough race this year. Losing time on that first day put me on the back foot a little for the rest of the stages, and the way things are now, any mistakes can lose you a lot of time on the others because things are so close. The terrain here in Saudi makes for a really fast race too, a lot of the stages are sprints to the finish, but the atmosphere is good and it’s a good place to be. I’m excited for 2023 already!”

Kevin Benavides showed impressive speed throughout the whole 2022 Dakar Rally – his first riding for the Red Bull KTM Factory Racing team. Also losing time on the first day in Saudi, the 2021 Dakar Champion put in day after day of fast, consistent performances to fight his way back up the order to lie fifth overall at the close of stage nine. Unfortunately, after suffering a technical issue on stage 10, the Argentinian was forced to withdraw. Returning to complete the final two stages of the race, Benavides was immediately back up to speed, claiming a stage win on day 11. Happy to reach the finish line safely and taking the many positives from his performance, Kevin is already fully motivated for next year’s event.

Kevin Benavides: “I have enjoyed this final day at the Dakar – I opened the stage, which was great, and it feels good to finally get to the finish. Obviously, it’s frustrating to have had the problem on stage 10, up until that point my race had gone really well, and I believe I had the pace to challenge for the podium. These last two days have shown that, too. There are many positives I can take from this year’s race and I’m really happy with how I rode and navigated through the stages. Part of the Dakar is all about learning and improving and so I’ll take that away from this year and try to come back even stronger in 2023.”

Making not only his Dakar debut, but also his first ever competitive rally-raid appearance at the 2022 Dakar, Danilo Petrucci raised a few eyebrows around the paddock with his consistent display of speed and skill on his Tech3 KTM 450 RALLY. Claiming a stage win at the Dakar is a huge accomplishment, to do it at your first attempt is a spectacular achievement! Attaining his goal of completing the race, Danilo was overjoyed with how his race had gone and what he had accomplished.

Danilo Petrucci: “I am so happy to finally reach the finish line and to complete the goal I set out to do. It’s been a tough time both leading up to the event and the race itself, but to complete my first ever Dakar feels amazing. I’m really happy with my performance but over the last couple of days I have had some crashes and feel quite sore at the moment. Thanks to all the team for their hard work, it has been an amazing experience and one of the hardest things I have ever done.”

Completing his 2022 Dakar campaign with an excellent fifth-place result on stage 12, KTM-supported privateer Mason Klein not only finished as top rookie, but also claimed an outstanding ninth overall. The 20-year-old American has shown incredible navigation and roadbook skills over the course of this year’s event, as well as the speed to back it up.

Norbert Stadlbauer – Rally Team Manager: “I’m really proud of the whole team. The Dakar is simply the toughest, hardest race in the world. For all of our riders to get to the finish is a huge achievement. Big congratulations to Matthias who did an amazing job to put his KTM on the podium in third position. It’s another really good result for him and even more impressive considering the level of this year’s event. Thank you also to Toby, Kevin, and of course Danilo, who all performed very well over the whole race. It’s been an amazing Dakar, so thank you to all who helped to make it happen.”

Very tough weekend from a human point of view at WorldSBK

On a Sunday that began with one minute silence in memory of Dean Berta Vinales, Scott Redding reached the podium twice, finishing third in Race-1 (instead of the Superpole Race) and second in Race-2. For Michael Ruben […]