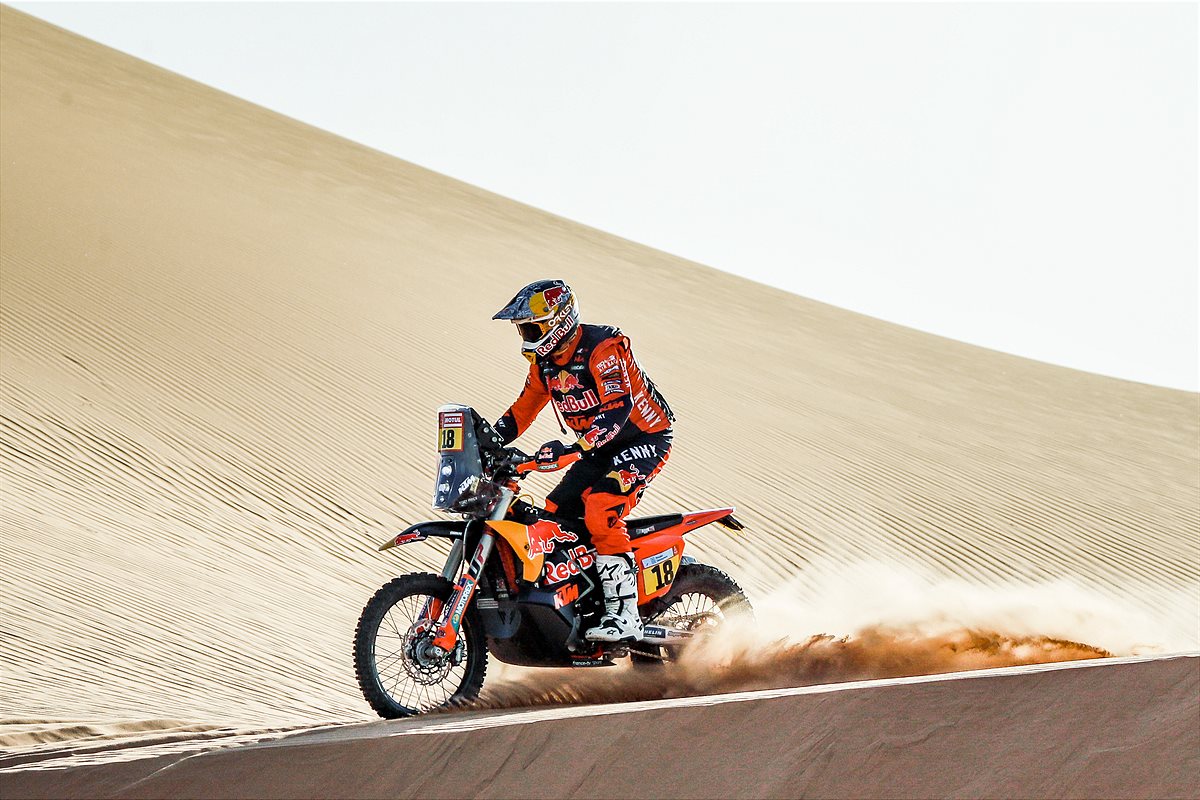 A long, 759-kilometer day in the saddle lay ahead of the riders as they entered stage 10 of the rally from Wadi Ad Dawasir to Bisha. The 375-kilometer timed special was mostly made up of fast sandy tracks, with a couple of dirt sections and dunes adding to the mix. Although navigation was relatively straightforward, it was still easy to make a costly mistake when picking a route through the stage.

Despite his relatively late start position into today’s special, Toby Price decided to remain completely focused on his roadbook throughout the stage. The tactic paid off as the two-time Dakar champ delivered a near-faultless run through the challenging stage, slowly moving up the order and taking the lead on time by kilometer 250. Toby’s win moves him up to sixth in the provisional rally standings where he trails the current event leader by just under 28 minutes. A sizeable gap, but one the Aussie hopes to reduce over the final two days of racing.

Toby Price: “It’s been a really good day for me today. I focused on my roadbook the whole way and did a good job with my navigation with only a couple of small mistakes over the whole stage. I’ve moved nicely up the order overall, but there is still a bit of a gap to the front guys. As we know, anything can happen in rally, so I’ll give it my all for these last two days and we’ll see where we end up.”

Setting off as the fourth rider to enter today’s special, Matthias Walkner caught and passed the riders ahead of him by the halfway point, and from there had the unenviable task of opening what was arguably the toughest part of the stage. A couple of small errors ended up with the Austrian losing several minutes to his rivals, but despite the setback, Matthias still lies well within the top five overall and will enjoy a strong start position for tomorrow’s penultimate stage 11.

Matthias Walkner: “The Dakar is always a little bit up and down and today after I hit the front, I lost some time with a couple of small mistakes. The sun was really high today and it made visibility quite bad, which in turn made the pistes really difficult to see when you’re out front. It’s frustrating, but that’s always the way it is. Up to that point I think I was riding really well and making up good time. We still have two very long stages to go, so I’ll get some rest tonight and then be ready to attack again tomorrow.”

Reaching the final stages of his first ever Dakar Rally, Danilo Petrucci continues to put in highly commendable results among the more established rally racers. Completing stage 10 in 11th place, the former MotoGP™ star is now fully focused on the final two stages of the event and claiming a Dakar finish at his first attempt.

Danilo Petrucci: “Today was tough because it became very hot as the day went on and then it’s easier to make mistakes. I’m pleased with my result, but I didn’t push too hard because I’m really close to the end now and my main goal has always been to finish the race. Two more days to go, and I’m looking forward to getting to the end.”

Unfortunately for Kevin Benavides, his 2022 Dakar Rally campaign came to a close following a technical issue on stage 10. Starting the special in third, and making good time, the reigning Dakar Champion was forced to stop at kilometer 133. Unable to complete the stage, Kevin will return to the bivouac and hopefully re-start the event tomorrow, although he will not be eligible to feature in the final classification.

With the media filled with bad news today it is great to promote the good news. We take a look at Yamaha 65 years of Innovation, Passion & Inspiration on today’s Inspiration Friday! From Iconic […]

Team Suzuki Press Office – August 19.  The penultimate round of the SUZUKI ASIAN CHALLENGE series at Sentul International Circuit in Bogor, Indonesia provided close and exciting racing in the popular single-platform championship which uses […]