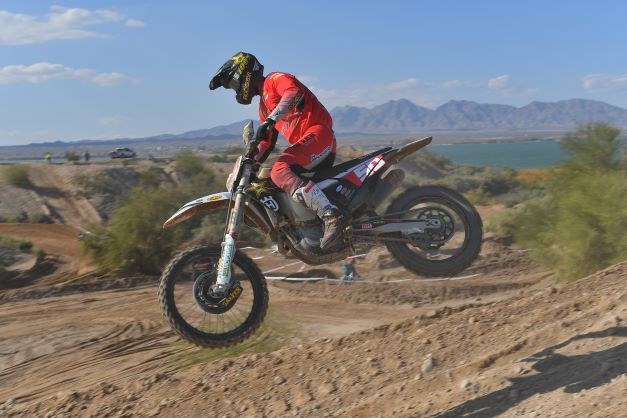 Settling into third early on, Walton chased down the front-runners ahead of him on a fast-paced course. Nearing the halfway mark, he was able to get around the second-place rider and within another lap, he was in the lead. He ran out front aboard his FX 450 for several laps before slipping back into second for the remainder of the one-hour and 35 minute race. Landing on the podium five times this season, Walton was able to wrap up the year at second-place overall in the championship.

“It was definitely a grind but it went well,” Walton said. “Havasu is always one of those races where it’s never easy and there’s always that push stage. This weekend, it felt like there were never really any breaking points. The first part we were pushing hard and as we started getting into lappers, it made it extremely hard to run and flow lines. The intensity felt high the whole time and there were a lot of challenging, tight and rough sections out there. I tried to flow and adapt to changes with the track as it got rougher, which asked a lot of me physically, but my body felt good towards the end and I started to pull my lines out a little bit better. Second place – can’t be mad at that – but I always want to push to that top step. I felt like it was all-in-all a healthy ending to the season. So, I definitely have some good drive coming into 2023.”
Pro Results – Round 10
1. Dante Oliveira (KTM)
2. Austin Walton – Rockstar Energy Husqvarna Factory Racing
3. Mateo Oliveira (KTM)
Pro Championship Standings
1. Dante Oliveira – 270 points
2. Austin Walton – Rockstar Energy Husqvarna Factory Racing, 196 points
3. Cole Martinez – 172 points
…
6. Dalton Shirey (HQV) – 130 points
7. Justin Hoeft (HQV) – 123 points
About Michael Le Pard 8449 Articles
"Mr. Totalmotorcycle". Owner and Founder of Total Motorcycle. Supporting over Motorcyclists and Motorcycling for 23 great years. Total Motorcycle is my pride and joy and being able to reach out 375 million people has been incredible but I could not have done it without the support of my visitors, readers and members, thank you so much! You are making a difference to millions of riders worldwide. Thank you.
Website Facebook Instagram Twitter YouTube LinkedIn

GET A HISTORY LESSON IN AMERICAN FREEDOM WITH ACRES OF ACTIVITIES Visit the 115th Central Rally Point where H-D history and custom culture comes to life. There’s acres of free outdoor activities all weekend long.  […]