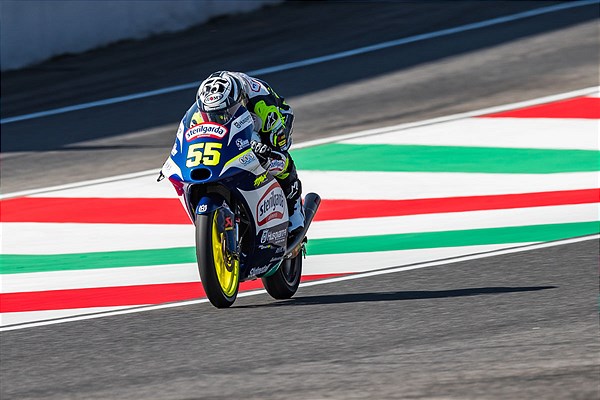 Mugello staged its 35th FIM event and the 5.2km course contained fifteen inviting turns of varying cambers. Romano Fenati and Adrian Fernandez got to business with their Husqvarna Motorcycles FR 250 GP machinery in the warm and sunny Free Practice sessions through Friday and Saturday and the Italian eventually earned 7th on the grid – at the top of the third row – and the Spaniard had to accept 26th.

20 laps of typically unpredictable racing began at 11.00 Sunday morning and Fenati was immediately reactive to his place in the 12-strong pack. Fernandez was unfortunate not to complete the first lap after falling so the onus fell on Fenati’s progress as he twice led the Grand Prix through the action-packed dispute for the win.

The decisive last lap saw Fenati spearheading the group as they rushed to the first corner but the veteran could not find an effective slot on the final charge to the finish line and ended-up with 6th place; 0.7 of a second from 1st.

With 56 points Fenati is stationed 5th in the Moto3 championship table. Fernandez is 22nd. The Gran Premio D’Italia Oakley is the first of four Grands Prix in five weeks and a busy stint for MotoGP. The next date on the calendar comes next week at the Circuit de Barcelona-Catalunya and the Gran Premi Monster Energy de Catalunya.

Romano Fenati: “I’m not happy with the last lap because I made a small mistake that cost me a few positions but we had a strong race today and need to keep this competitiveness. Overall it was a difficult day because we lost a fellow rider this weekend and our thoughts are with him.”

Adrian Fernandez: “A difficult day. Warm-up went well and I had a good feeling on the bike but I just couldn’t avoid a few riders on the first lap and the race was over. One to forget. We think about Barcelona now.”

Max Biaggi, Team Principal: “Not so many words about the race; P6 for Romano and a crash for Adrian. As a team we are very sad to learn the news about Jason Dupasquier and our thoughts are with his family.”

Nothing protects like a full-sleeved jacket, and nothing breathes like mesh. So if you want all-day comfort in the heat of the summer without sacrificing coverage, a mesh jacket is an obvious choice. Indian Motorcycle […]

Calgary Motorcycle Show 2020: GET YOUR HANDS ON YOUR NEW RIDE

January 6, 2020 Michael Le Pard Events, News Comments Off on Calgary Motorcycle Show 2020: GET YOUR HANDS ON YOUR NEW RIDE

CALGARY, AB (January 2, 2020) – The Motorcycle Show – Calgary presented by NFP is fast approaching.  It will showcase the new line-up of 2020 models of motorcycles, scooters, ATVs and side-by-sides.  The Show runs […]

Yamaha Motor Europe is pleased to announce that Thibault Benistant will join the Monster Energy Yamaha Factory MX2 team for the 2021 season. The recently crowned EMX250 Champion will race a YZ250FM in the FIM […]